In March, Chitika reported that Verizon held 51.4 percent of the US Android market, but the company’s most recent report shows that Verizon has fallen to 41 percent. AT&T’s Android share, meanwhile, jumped five points to 8.7 percent.

The Android dip was to be expected — Verizon reported in its first quarter earnings that it had sold 2.2 million iPhones. In that same quarter, the carrier said it shipped 500,000 units of its first batch of 4G Android phones.

The iPhone is expected to eat into Android sales when it’s eventually made available on T-Mobile and Sprint (which may end up happening with the release of the iPhone 5). But let’s not forget that Google is activating some 500,000 Android phones every day, and that Android currently holds 40 percent of the US smartphone market (iOS is in second place, with 26.6 percent). Even with the iPhone on all US carriers, it won’t be able to compete with sales from cheaper Android phones. 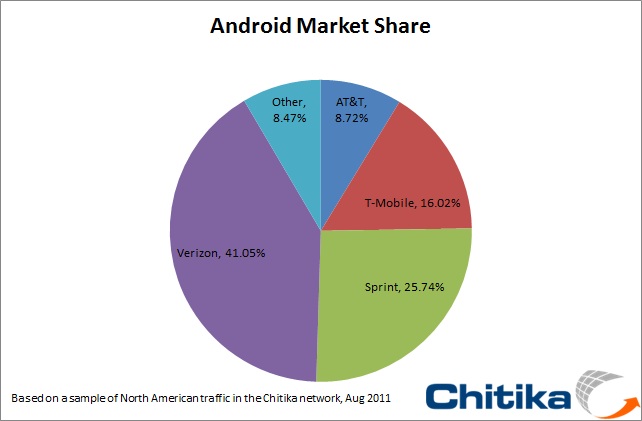