If you’ve been following the rat race that is U.S. carriers’ 5G rollouts, you’re probably aware that Verizon recently announced it would light up mobile 5G in portions of Providence, Rhode Island this summer, coinciding with a rollout in Denver, Colorado. The company claimed in a press release that customers could expect speeds up to 450Mbps from its 5G Ultra Wideband Network, with peak speeds over 1.5Gbps and less than 30 milliseconds of latency. And while it’s been a long time coming, Verizon’s finally delivered on its promise. Kind of.

This week, the folks at Big Red invited us to put its Providence network to the test using the newly launched Samsung Galaxy Note10 5G. The network covers College Hill, Federal Hill, and Mt. Hope, as well as areas around landmarks like Brown University (specifically the Erickson Athletic Complex and Wriston Quadrangle), Rhode Island School of Design, and Providence College. Like the Chicago demos Verizon staged in April and May, we were allowed to stress-test the network as we saw fit, short of tinkering with the 5G transceiver nodes affixed to electrical poles throughout the city.

We kicked off our roughly 40-minute network test at Blue State Coffee, which sits at the corner of Thayer Street and Bowen Street. It’s to the west of downtown Providence and College Hill and just a few blocks north of Waterman Street, which borders the imposing Brown University Haffenreffer Museum of Anthropology and the University Sciences Library. 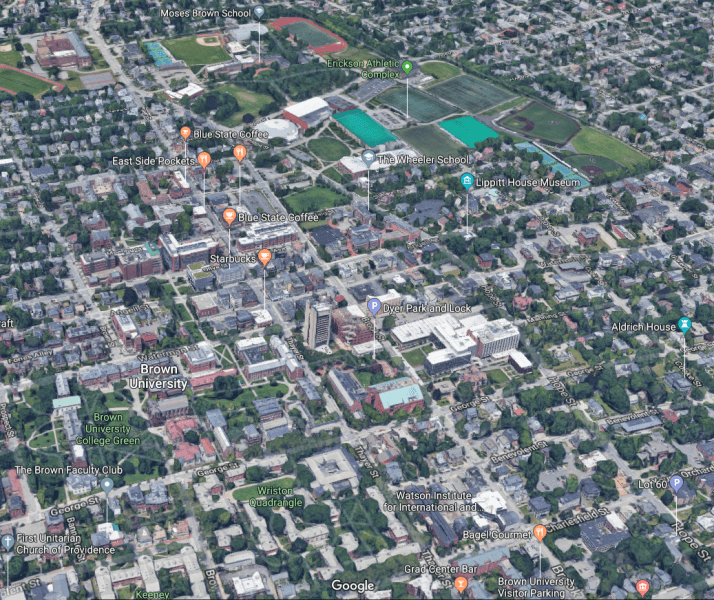 Above: A rough overview of one of the locations of Verizon’s 5G deployment in Providence, Rhode Island.

At the top of Thayer stands one of the aforementioned 5G nodes, which blankets the surrounding alleyways and lawns with high-speed connectivity. And toward the Starbucks and Shake Shack, where Thayer narrows and bisects George Street, additional microcells carry the signal further.

Providence is the first Verizon 5G deployment to tap Samsung networking equipment almost exclusively, conferring the advantage of 5G upload speeds as well as 5G download speeds. (That’s an improvement over the 8Mbps to 15Mbps upload speeds Verizon’s other 5G deployments see.) But as of press time, the benefits remain largely theoretical — 5G uploads in our testing fluctuated between 10Mbps to 130Mbps. 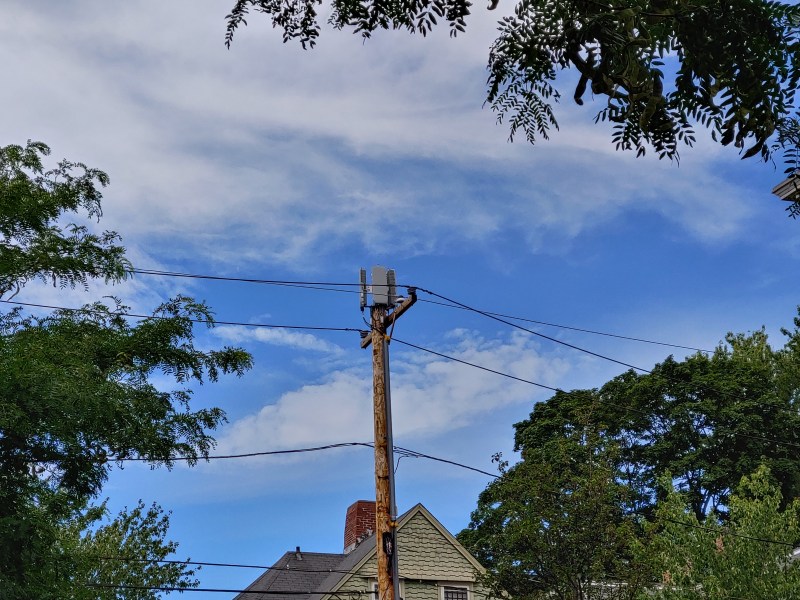 A note about Verizon’s flavor of 5G: It operates on the short-range 28GHz and 39GHz millimeter wave (mmWave) frequency bands, which are impeded by objects like shrubbery, thick windows, and heavy precipitation. It furthermore requires line of sight, which translates to about 30 yards of nodes outdoors and without obstructions. As is the case with other compatible smartphones, including the LG V50 ThinQ 5G and the Galaxy S10 5G, the Note10 falls back to Verizon’s 4G LTE network when the signal strength dips below a certain threshold.

For comparison, T-Mobile employs 28GHz in most of its 5G launch cities and 39GHz in Las Vegas, while AT&T uses 39GHz millimeter wave spectrum in every market where its 5G network is available. Breaking from the pack, Sprint leverages its mid-band 2.5GHz holdings, which allow for better range at the cost of slower speeds.

It’s also worth pointing out that 5G NR — the late 2018/early 2019 follow-up to 4G — is a relatively nascent technology that’s in many ways less sophisticated than LTE at the moment. LTE uses a more complex encoding called QAM, or quadrature amplitude modulation, and it’s able to leverage more antennas at once. Current LTE networks support 4×4 MIMO (multiple-in, multiple-out) and 256 QAM, or four layers of data and eight bits per symbol, compared with 5G NR’s 2×2 MIMO and 64 QAM (two layers and six bits per symbol).

5G in the wild

In the interest of giving Verizon’s network a fair shake, I headed toward the most conspicuous 5G node within walking distance — the one situated just up the hill from the Blue State. Cells at its topmost point angle down Thayer Street and to the east and west of Bowen, blanketing blocks in every direction with 5G coverage. 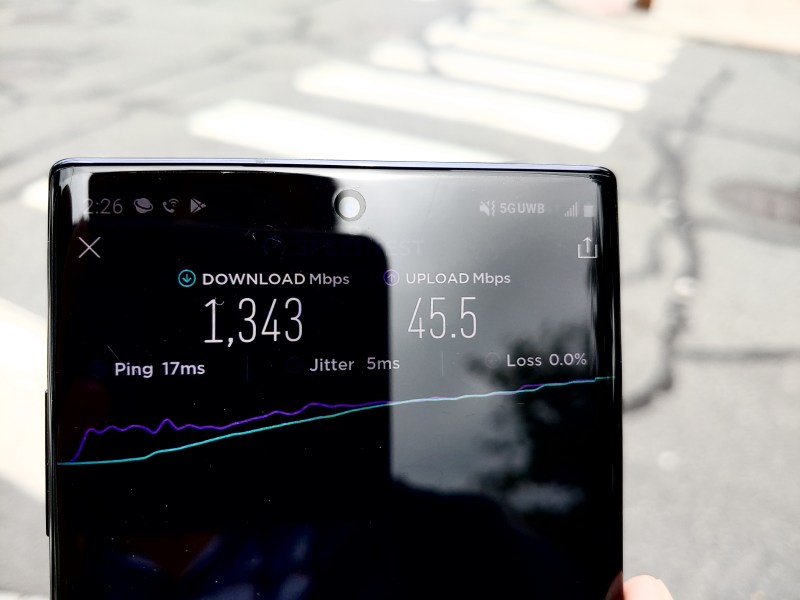 My initial speed tests along Bowen didn’t disappoint, particularly considering the many partially occluding tree trunks, leaves, and cars I encountered along the way. All three exceeded the promised speed of 450Mbps by at least double, and in one case by nearly quadruple, and it’s at the intersection of Bowen and Brook Street (which runs parallel to Thayer) where I recorded the highest upload speed of the day.

I set off in the direction of Brown’s campus after trudging around Bowen for a bit. A few false starts later, it came to light that Brook is the easterly border at which 5G reception begins to degrade. Along Hope Street, a block east of Brook, coverage was at best spotty and at worst nonexistent. 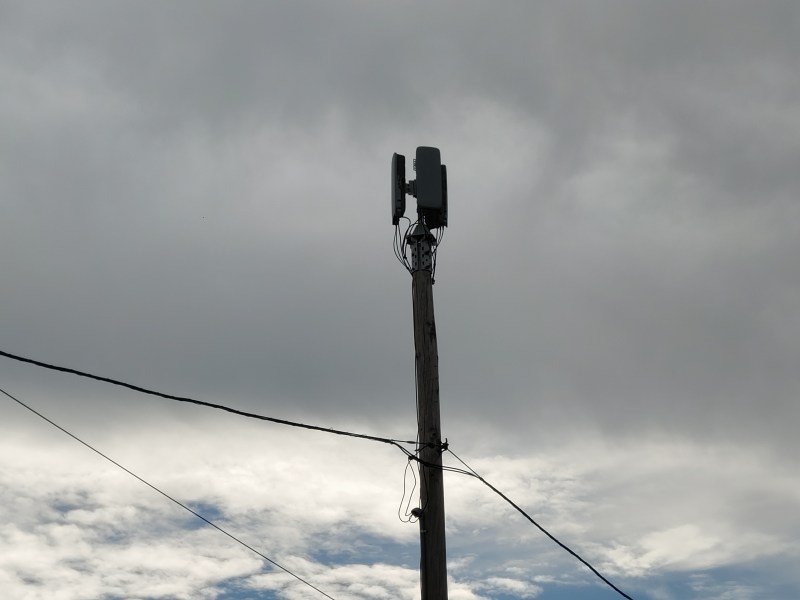 Above: Another 5G node.

I conducted another trio of tests just past the Wheeler School building abutting Angell Street. The download speeds there were just as impressive as the first few runs, but uploads were a different story. Only a single test managed to break the 10Mbps barrier, and then that lasted for only a few seconds before inexplicably nosediving.

It’s at this point I doubled back to Thayer to kick off a quick file download test. Then I made a beeline for Hope to canvas the campus, which led me to Yan’s Cuisine at Brook and Benevolent. 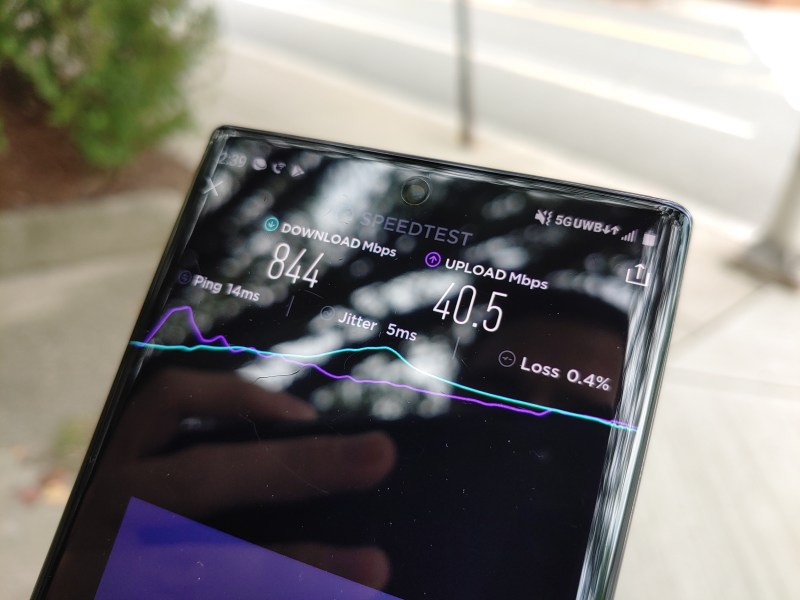 Speeds there were in line with previous tests, but the 5G coverage was significantly patchier. Perhaps because of the denser overgrowth, my Note10 5G loaner repeatedly failed to lock onto a 5G signal even with a clear view of the nearest node. Things didn’t improve by much as I walked Thayer from the campus back to Blue State — the Note10 5G stubbornly clung to 4G the entire time, despite the fact that the nearest node was no more than several hundred feet away.

A work in progress

So what conclusions might be drawn from an afternoon stroll around Providence? First of all, would-be Verizon customers expecting consistent 5G coverage are bound to be disappointed. A step behind a wall or a walk across the road is all it takes to lose 5G connectivity as quickly as it came.

In fairness to Verizon, the carrier claims speeds will improve with time, potentially substantially with the rollout of techniques like beam-forming and beam-steering. And at least at the moment, the carrier isn’t levying an outrageous premium on early adopters. Both its $85 Go Unlimited plan and its $105 Above Unlimited plan include “unlimited 5G data” when connected to a 5G network, just $10 over prior 4G LTE prices.

But it will take a lot to fill the gaps in Verizon’s current deployments, not to mention the 20 additional cities in which it plans to launch service by 2020. Each of the network’s small cells needs to be approved for a specific location by a city or town, and although Verizon has 800MHz or more of spectrum in many areas, which could increase speeds, tapping it will take further debugging and firmware updates. Its indoor coverage is another story — Verizon recently announced it would partner with Boingo to expand its 5G service indoors and to public spaces like airports, stadiums, hotels, and more, but a timeline remains elusive.