Introduced by Consumer Technology Association head Gary Shapiro as one of the most exciting speakers at the 2019 CES, Verizon CEO Hans Vestberg took the stage to discuss the network’s plans for 5G this year. He focused on fairly narrow upcoming uses of 5G technologies by various partners while actually demonstrating very few of them. But a 5G remote-controlled drone flight provided an unexpectedly intriguing highlight at the event and a discussion of 5G-assisted health care added an example of how the technology will save lives.

After repeating some of the more widely known talking points about next-generation 5G wireless technology — its potential to transform multiple industries, value to the upcoming fourth industrial revolution, and ability to improve consumer device performance — Vestberg discussed what he called the eight currencies of 5G: facets of the technology that will be valuable and game-changing. Without those eight features, he said, you won’t have real 5G. 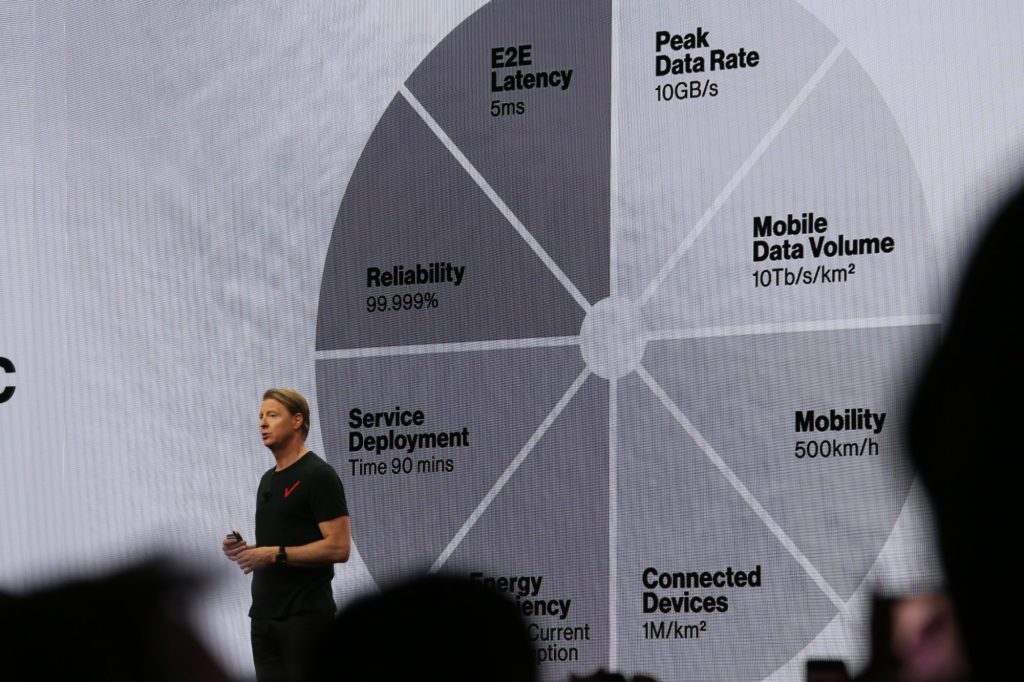 To spotlight various ways the currencies will work, Vestberg brought out representatives from two “iconic” American companies to discuss how partnerships with Verizon will change their industries. First, New York Times Company CEO Mark Thompson said the publication will launch a new 5G journalism lab in its offices in New York City. The lab will get early access to Verizon 5G technology and equipment and use the gear in live news. Thompson expects that it will transform the way the publication’s journalists gather news, as well as how it distributes the news — notably including more VR and AR content.

Second, Walt Disney Studios CTO Jamie Voris took the stage to say that his company will be working with Verizon to give Marvel, Pixar, Disney, and LucasArts filmmakers early access to 5G innovations. Six months ago, Disney’s StudioLab was created in Burbank to figure out how to do things like improve rendering speeds for digital effects and use drones to advance cinematography. Now Verizon has joined StudioLab as a core innovation partner and will help Disney work on 5G cloud-based production workflows, 5G-connected movie standees and posters, and volumetric performance capture. 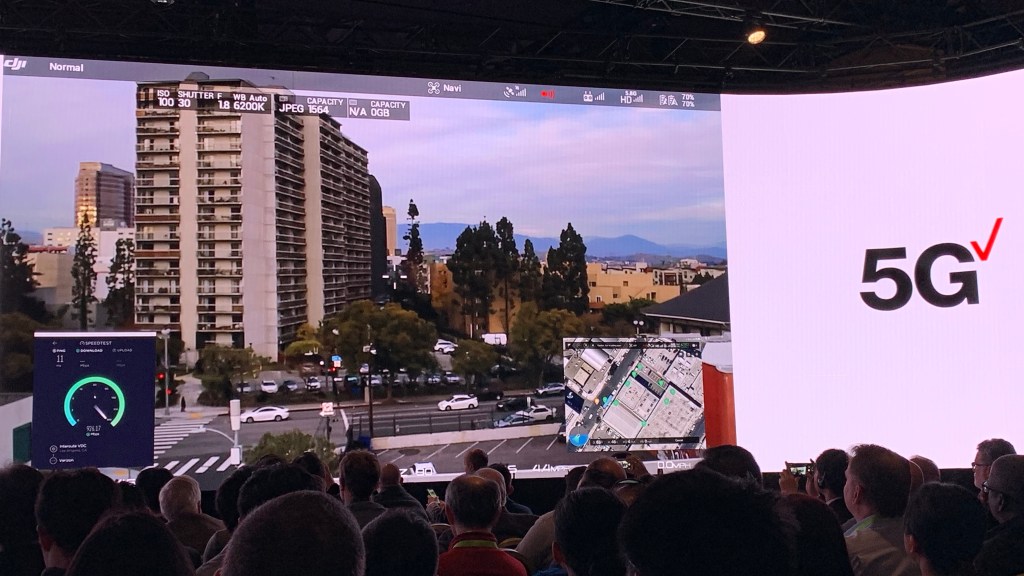 Above: A 5G drone in Los Angeles is piloted from Las Vegas.

In a more surprising update, Skyward head Mariah Scott announced that Verizon is today committing to becoming the first carrier to have 1 million drones connected to its 5G network. Owned by Verizon, Skyward works with companies such as Southern that use drones for safety missions — researching locations that can’t be seen from land with drones capable of flight beyond visual lines of sight.

Scott said that 5G’s low latency, high bandwidth, and security will let hundreds or thousands of drones inspect thousands of miles of area. Vestberg briefly took the stage to help pilot — well, launch — a drone in Los Angeles from the stage in Las Vegas, with nearly 950Mbps of bandwidth on the network.

Next, Dr. Christopher Morley of Medivis spoke about the impact of 5G on medical science, including how 5G could help the medical community rethink the connections between patients and caregivers — bringing people together and changing the way doctors provide care. He also offered a powerful tangible example of how 5G and AR will work together in medical procedures. 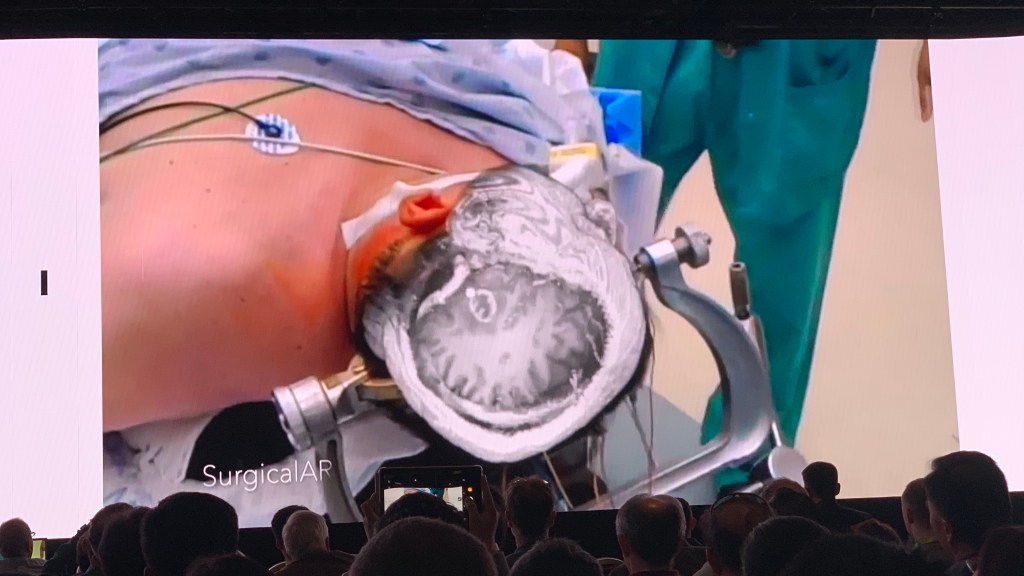 Many invasive procedures, Morley said, are done just as they were 30 years ago: blindly. Brain surgery catheter insertion, for instance, is based on basic external judgments that have a 40 percent failure rate, causing excess bleeding and unnecessary patient suffering. Morley asked why doctors are still working this way when so many patients have their CT and other scans sitting right in an online database, and he pointed to 5G and AR as the solution.

Today, doctors have to face away from scans to look at a patient. But if doctors wore low-latency wireless AR glasses, they could look directly at the scans while viewing the patient to determine optimal placement for catheter insertion, for example.

Vestberg also used a live video feed to contact Houston native Clayton Harris, whom the company has celebrated as the first 5G customer in the world, since he was the earliest subscriber to Verizon’s 5G Home broadband service. Harris explained that he picked 5G Home because it looked like the best option for his home office, gaming, and video streaming needs. He then ran a live speed test hitting 690Mbps and said that he normally sees 600Mbps to 1Gbps speeds, sometimes reaching as high as 1.3Gbps. 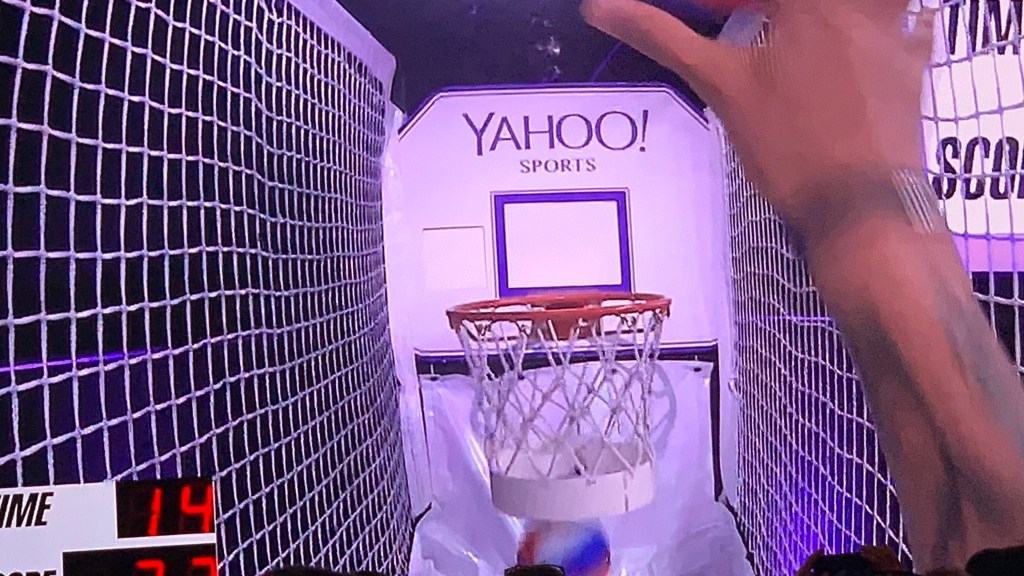 To wrap up the event, L.A. Lakers basketball player Kyle Kuzma was shown doing a basketball demonstration using 5G VR goggles, shooting baskets on an arcade game while relying on the low-latency response time of the glasses rather than his own vision to make the shots. Kuzma successfully completed dozens of baskets with the goggles on.

As almost an afterthought to the partnership announcements, Vestberg announced a $1 million fund called the “Built on 5G Challenge,” offering money to companies that can come up with concrete, transformative uses for 5G technology. Details can be found here.

What was missing from the event was any news on Verizon’s plans for 5G deployments throughout 2019. Fortunately, the company discussed numerous details of its 5G agenda in an interview with VentureBeat published earlier today.