Seeking to leverage the massive audience it has built across a network of YouTube channels, Vevo is getting more serious about building its own independent platform and products.

The latest fruits of that evolving strategy were released today: a new Android app and a new tvOS app for Apple TV. In an interview, Vevo head of product Mark Hall said both apps were re-written from the ground up to deliver better experiences with personalization, curation, and discovery.

And he promised these were just the beginnings of what would be a more aggressive product development strategy for Vevo.

“This is just Vevo continuing to take steps toward having quality products of its own in the marketplace,” Hall said. “Vevo has a huge presence on YouTube and Google and that’s going to continue. But I think we also recognized there’s an opportunity to have our own services in the market.”

Vevo was launched in 2009 as a joint venture between several major record labels and Google, and was intended to better monetize music videos that were already starting to generate big dollars on YouTube.

Today, Vevo is huge. In January alone, its videos had more than 16 billion monthly views from 300 million visitors. In addition to YouTube, the company has developed apps and services for a wide range of gadgets and platforms.

But last year, Vevo brought in new CEO Erik Huggers, who wanted the company to focus more on developing its own platform and apps to compliment its YouTube channels.

That’s particularly important, Hall noted, because Vevo’s viewership continues to shift. In 2015, Vevo’s mobile viewership grew 112 percent, accounting for about half of its traffic. And views on connected TVs grew 171 percent (though from a smaller base). 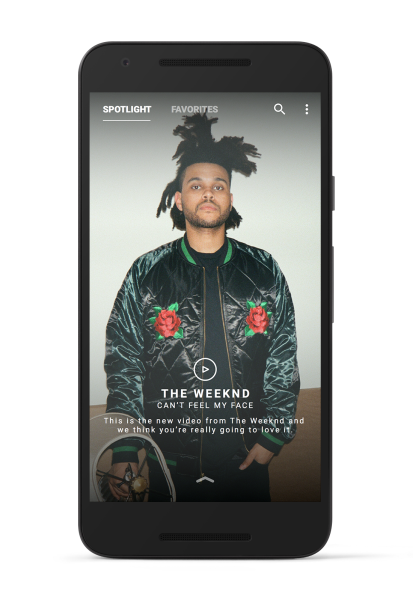 With the new tvOS app, the goal is to give users a choice between a more interactive experience or a more passive one, if they just want to put down the remote and lean back. The Vevo tvOS app will sync with users’ mobile or desktop accounts, where they can manage playlists and favorites. The “spotlight” feature will auto-play if users don’t want to bother surfing around the app. Hall said these new features were just the basics for a long product roadmap.

“I would describe this effort as our down-payment,” he said. “We’ve got a long effort ahead of us. We’re going to be working to make that personalization even better.”

On the subject of future plans, it’s worth noting that Hall just recently joined Vevo after it acquired his company, Showyou, in December. Showyou made its name as a video curation service (think Flipboard for videos). But last year, it also launched a subscription service that let artists build their own channels.

“We’re applying a lot of that thinking and tech into Vevo,” Hall said. “Any channel or artist could build a subscription channel. So you can speculate on some of that.”