If Instagram is worth an eye-popping one billion dollars, who’s to say the fast growing Viddy, which lets users easily record videos, apply filters and share with friends, isn’t on the same rocket ship trajectory.

The company, founded in April 2011, has added nearly 10 million users in the last two months and brought on a boatload of celebrities as advisors and investors. Now reports are flying fast and furious that Viddy is raising a series B of $30 million at a valuation between $300-370 million.

Viddy is one of many apps that have recently seen a huge growth surge thanks to smart integration with the Facebook timeline. The company was 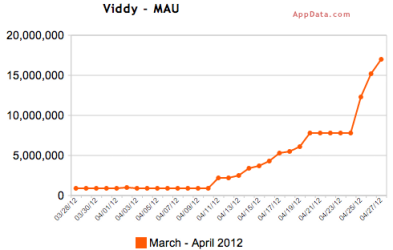 coasting along at around five million monthly active users through Facebook until they relaunched their app. With the timeline integration, they more than doubled that number in the last two weeks.

It’s not clear that Viddy is a direct competitor to Facebook in the way that Instagram was. Photo sharing is Facebook’s big feature and mobile was the area it was most concerned about leading into its IPO.

User generated video, on the other hand, is a market that has never really produced a profit. Youtube, despite its enormous size, is increasingly focused on producing professional content in the hopes of turning a profit.