The video messaging developer Glide is very bullish on the future of smartwatches and is looking forward to a time when smartwatches hold technology needed to enable wrist-to-wrist video communication.

Today Glide has an app for Android or iOS that allows users to chat with each other by recording short audio or video messages and sending them back and forth over Wi-Fi or cellular networks. As soon as one user begins recording a video, the recipient can see it being recorded. So has a real-time feel without actually being real time.

The messages can be sent to users who are not online. When the user comes online they can see a list of video messages cued up for viewing. The messages are not stored on the user’s device, but rather on Glide’s servers.

The magic behind the app is the video compression standard. Video is a bandwidth hog, so sending it over a Wi-Fi or cellular network can be a problem. Glide CEO Ari Roisman told me his company has a proprietary way of squeezing video down to a reasonable size without sacrificing too much quality.

But Roisman and his team are particularly keen on having their app run on the wrist, on smartwatches. Glide already has an app for the Android Wear OS, and it has just begun developing its app for the Apple Watch. In fact, the WatchKit software developer kit (SDK) became available on Roisman’s phone as we were having coffee yesterday in downtown San Francisco.

The smartwatch, Roisman believes (and so do I) is the next great communication platform after the smartphone, and it may even end up being bigger than the smartphone as a truly personal communication device. Smartphones, let’s remember, grew from a telephony paradigm and were only later retrofitted to act as a personal computing device.

Smartwatches can be designed from the ground up to assist their wearers.

Ergonomically, smartwatches may make more sense, too. By some accounts, Roisman points out, we reach into our pockets to grab our smartphones 60 times a day. That’s a lot of wasted time and motion, he says. Raising one’s wrist toward the face is a much more natural movement, Roisman says. Reducing wasted motion is an emerging theme in wearable design, with many companies focusing on streamlining. 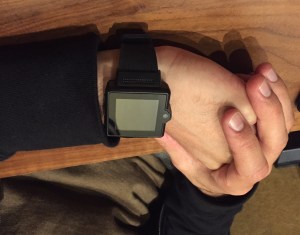 Smartwatches are just getting off the ground, and most of those we’ve seen so far have no cameras. So watches like the Samsung Gear and the Motorola 360 can only send audio messages through the Glide platform.

I saw Roisman speak on a panel at the Mobile First conference last week, and he showed the audience an Iradish I6 smartwatch that his cofounder Adam Korbl found in Shenzhen, China for $100. The watch is big and black and boxy, but it runs the Android Wear OS and has a 3G radio inside, as well as a speaker and, most importantly, a camera.

Roisman showed the watch because he sees it as indicative of where things are going — fully featured smartwatches with lower and lower price points. He demonstrated how an Android phone could hold a video conversation with the Chinese smartwatch in near real time. When Roisman began recording video on the phone it showed up almost instantly on the Chinese watch.

So 2015 will be a big year for the smartwatch. The Apple Watch will launch. Samsung will release its fifth and sixth smartwatches. Motorola will release the second edition of the popular 360 watch. LG will release its third- and fourth-generation watches. And new players will enter the market.

As smartwatch makers get better and better at designing and adding new components (like cameras) to the devices, a whole new set of experiences and use cases will emerge. Video chatting from the wrist will be among the most important.