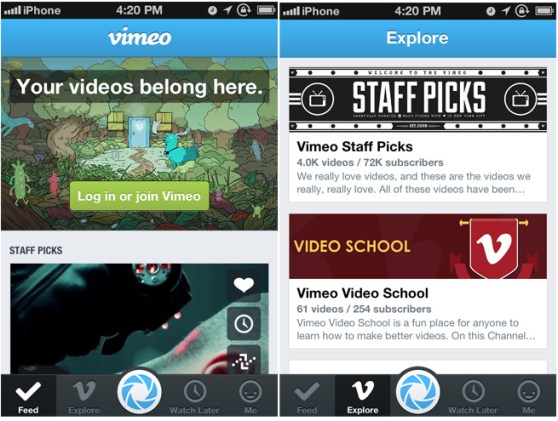 Popular video-sharing site Vimeo has rebuilt its iPhone app with the addition of faster uploading and improved social sharing to Twitter and Facebook, a sign it wants to attract more fun content shot on the fly.

“We re-visioned it, refocused it, and simplified it a lot,” Vimeo President Dae Mellencamp told VentureBeat. “People do want to share quick clips from their lives on Facebook and Twitter. You don’t see these brief clips on the Vimeo homepage, but they are very popular.”

Vimeo has had quite the year. Over the past few months, it’s added a new CEO, redesigned the main site with an emphasis on larger videos, launched an array of apps, and given its community ways to make money with a “tip jar” and paywall options. Now it’s gone back to mobile to keep momentum in that extremely important area.

The new iPhone app adds a few key features. First, it makes uploading faster and more convenient than before and it begins uploading the second you put in a video title. Second, users can now pause and resume uploads, which can come in handy if they move between different wireless networks. Third, users can search for and watch other videos while uploading in the background. (A careful warning to iPhone users: If you don’t have unlimited data, be careful about uploading HD video. You could burn through your data cap pretty quick.)

Notably, the iPhone app removes the in-app video editor that Vimeo for iPhone had before. Mellencamp said Vimeo removed this because the experience needed to be streamlined. Additionally, she noted that video editing was difficult on such a small screen.

Next up, the iOS-focused Vimeo team will work on revamping its iPad app, Mellencamp said. In 2013, Vimeo also plans to look at its options at revamping the Android app.