Volvo is aiming to become the first automobile manufacturer to replace physical car keys with a smartphone app.

The Swedish car maker has announced a pilot program kicking off in Sweden this spring that will offer cars without any kind of physical key or fob and plans to make the system available commercially in 2017.

The keyless car technology will be demonstrated for the first time at Mobile World Congress in Barcelona next week, but, in the meantime, Volvo has unveiled this promo video demonstrating the new system.

Instead of keys, drivers will be given an app for their phones that lets them unlock the doors and start the engine through a Bluetooth connection. Through the app, customers will also be able to use more than one “digital key,” meaning they can access different Volvo cars in different locations depending on where they are.

While this feature would suit rich people with many cars, it could also be used in the car-hire realm — rather than having to collect a physical key, customers could receive the digital key on their phone. Moreover, it makes sharing keys much easier for single-car families, as you could park the car anywhere and pass the key digitally to your spouse or friend. 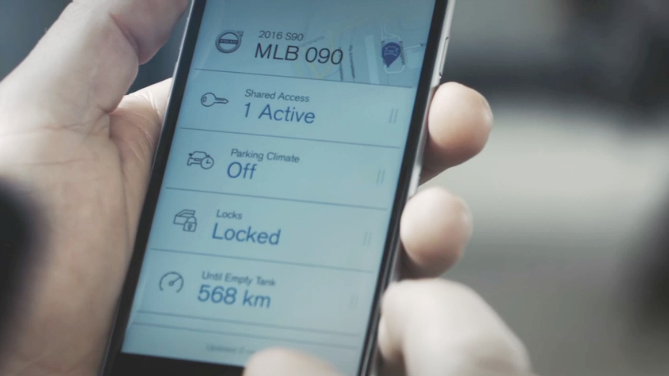 “At Volvo we are not interested in technology for the sake of technology,” said Henrik Green, vice president of product strategy & vehicle line management. “New technology has to make our customers’ lives easier and save them time. Mobility needs are evolving and so are our customers’ expectation to access cars in an uncomplicated way. Our innovative digital key technology has the potential to completely change how a Volvo can be accessed and shared.”

The concept of a “keyless car” is nothing new, of course. Most modern cars have a remote-controlled key fob for opening the doors, while many vehicles, such as BMWs, offer a plastic fob with a computer chip that’s placed on the dashboard so the driver can start the engine by pressing a button.

Hyundai has previously revealed plans for an NFC-powered feature similar to Volvo’s, but full details of its arrival on the market have yet to emerge. Meanwhile, Tesla’s Model S car has a system that allows drivers to start their vehicle by logging in through a mobile app and entering a password, though this is designed more as a backup in case the driver has lost or misplaced their key.

So while there have been moves across the industry to replace the need for any kind of key, Volvo could be the first to implement a truly keyless car. The company said it plans to pilot the technology with a car-sharing firm at Gothenburg Airport in the next few months, with a limited selection of the cars to be made available commercially from 2017. Perhaps wisely, Volvo said that it will also provide a physical key to customers who request it.

Volvo also recently announced that it had bought several hundred Nvidia Drive PX 2 car supercomputers, as it looks to join the growing army of companies that are building self-driving vehicles.