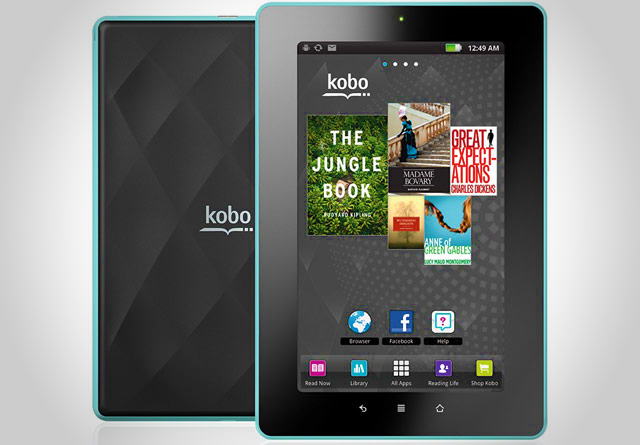 Kobo today launched Vox, a new, priced-to-sell Android tablet. Or is it an e-reader? Does anyone know the difference these days?

Vox is a color, 7-inch touchscreen, Android-running gadget that features music, video and social widgets and apps. It has a web browser, an email client, and even an app store stocked with more than 15,000 free Android applications.

The product directly competes with the much-hyped Amazon Kindle Fire, a similar device set to start selling November 15. The $199 Fire is another combination tablet and e-reader with a color touchscreen, apps and web browsing. Likewise, Barnes & Noble is now touting its updated Nook Color, which has apps, email and other tablet features; the Nook Color retails for $249.

All three of these gadgets are a dang sight cheaper than the iPad 2, which starts at $499. And being much better priced for a mass market is a key component to these devices’ success as holiday shopping season (how I loathe the commercialism of that nevertheless appropriate phrase) approaches in a bad economic year.

One question we’re asking is why the device is running Gingerbread, a.k.a. Android 2.3, an operating system for smartphones, rather than Honeycomb, a.k.a. Android 3.0, the fork of the OS intended for tablets. Better yet, why isn’t it running the brand-new Ice Cream Sandwich, code name for Android 4.0, the newest version of Android that’s supposed to work on all devices. We’re waiting to hear back from the company on that and will update this post when we get more information on the subject.

Kobo is the maker of the third most popular e-reader, also called Kobo, after Amazon’s wildly popular Kindle and Barnes & Noble’s Nook. Earlier this fall, Kobo launched Pulse, a new e-reader platform with some interesting social implementations. Pulse will also be featured on the Vox.

You can buy the Vox now on Kobo’s website; orders start shipping next Friday. The device will later be available in the “usual suspects” retail outlets where consumer electronics are sold, including Best Buy and Fry’s.