Let’s say you and some friends want to go to dinner and a movie.

“If I’m looking for a movie, I open a movie app like IMDB or Rotten Tomatoes,” Vurb CEO and founder Bobby Lo laid out for VentureBeat.

That’s followed by getting tickets in the Fandango app, looking for a restaurant near the movie theater in Yelp or Foursquare, and so on. The downside of “there’s an app for that” is that there’s a darn app for every … separate … thing.

Vurb wants to transcend that app craziness by serving as a kind of conductor of the app symphony. The free app launches today in Apple’s App Store, with an Android version expected in several months.

“What’s missing,” Lo told me, “is a way to make the experience more fluid” by getting apps to interoperate.

Instead of traipsing through relatively siloed apps — or, worse yet, trying to plan your evening through searches that will lead you to mobile web pages and apps — you open Vurb and search within such available-at-launch categories as Places, Movies, TV, Videos, and Music. 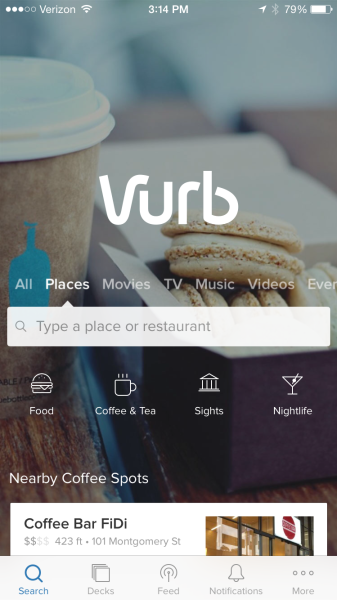 Above: The Vurb home screen

A Vurb Card, the app’s key unit, shows nearby movies and their details. You can pick a movie and, when you click to buy tickets, you’re taken into Fandango. You can return to Vurb via the iPhone’s app switcher. 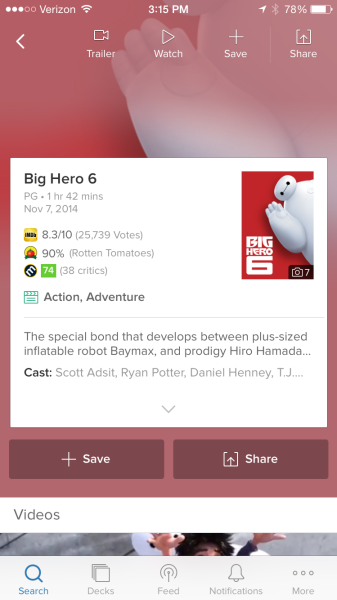 Above: A single Vurb card

Similarly, a user can search or browse nearby restaurants, and then go into OpenTable to book a reservation. It’s kind of like an actionable browser for apps.

Friends can share Cards or Decks, and Vurb has started to get public decks generated, such as chef Michael Mina’s deck of “Best Places in the U.S. for Cocktails.” You can create and share a deck to suggest “Our Plans for Tonight,” and your friends can then correct all your bad choices. 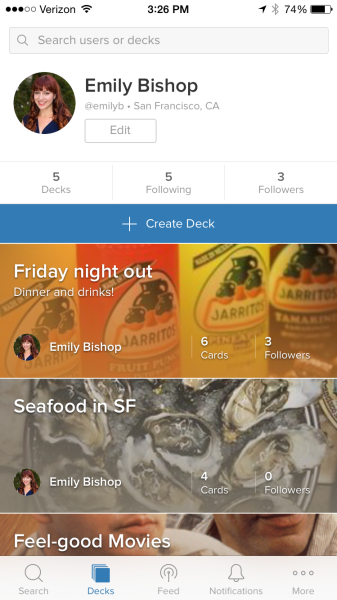 Above: A user’s profile and her decks

Vurb deep-links into the apps, with data often carried along. For instance, clicking on the ticket-buying link in Vurb for a specific showing of Birdman takes you right to that movie at the theater you wanted, in Fandango. Partnering apps at launch — Tastemade, Foursquare, Yelp, Rotten Tomatoes, and CBS Interactive’s Metacritic — offer their data on Vurb’s servers, while other apps’ data is accessed through their APIs.

One question about Vurb is whether most users are prepared for yet another app on top of their existing apps. You still have to go into various apps to make transactions, so it’s not like you’re done with app-juggling.

Second, why isn’t there such a task-oriented app browser at the system level in iOS and Android?

But there isn’t, so Vurb may fit the bill.

“Think of us as the router as you’re starting a process,” Lo said. “Vurb is your way of connecting to the right app and surfacing that info.”

The San Francisco-based Vurb has raised $10 million since its founding in 2011, and is currently focused on building an installed base. At a later point, Lo said, the company will look to monetize through “things like app installs” and affiliate fees.

Vurb’s key competitor, Lo said, is mobile search, which he described as “broken” in part because it takes you to starting points on web pages or apps.

“What we’re trying to do,” he told us, “is not just find the starting point of a task, but to navigate through it” by acting as a hub.

“No one is doing [anything] similar,” he said.