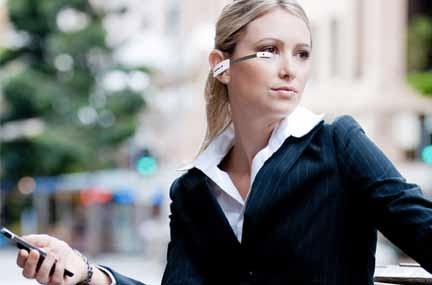 It looks like Vuzix, a small company based in Rochester, New York, is about to beat Google to the punch in releasing Internet-enabled smart glasses that allow you do things such as scan your email, use your favorite apps, and respond to updates from sources like Facebook.

The company announced its Smart Glasses M100 in November but first demonstrated the glasses to visitors at last week’s Consumer Electronics Show (CES) in Las Vegas. The glasses are still in development, but the company says they’ll be ready to go this summer and will be priced “under $500.” If the company meets that deadline, it will beat Google, a formidable competitor, to market. Google is pushing its Google Glass project hard. More on that below.

Early reviews of the product are positive. The Vuzix lens, at 800 x 480 pixels, provides a “bright, clear image that was easy to focus on even though it was visible only to my right eye … . It appeared about as big as the display of a 4-inch phone screen held at arm’s length,” said Tom Simonite in a hands-on review for Technology Review. 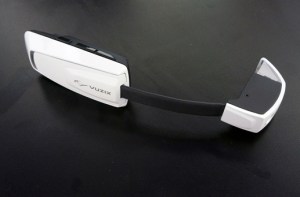 And it’s not like Vuzix is totally untested. It’s been working on its line of glasses for years, having so far built similar versions for the defense industry and for industrial uses. We reported on earlier versions in 2010.

Last week, the company also announced its own developer program so that developers can build apps designed especially for it.

The glasses attach to your head via an earpiece (see image at right). The lens — really, just a tiny video screen — is connected to the earpiece and wraps around in front of your eye.

The product uses the latest version of Google’s Android operating system and is controlled via Bluetooth using three buttons on the earpiece. At CES, Vuzix wasn’t ready to show actual apps built for it (Android apps are being rewritten specifically to cater to the Vuzix’s form factor). But it did demonstrate how you can use the earpiece buttons to browse and select regular Android apps. The current prototype also shoots 720p video, has 4GB of storage, GPS, and Wi-Fi.

The question is, will the company be able to stave off competition, especially Google Glass, when that product arrives in full force in about a year? Google is taking its time getting its Glass product synced with the cloud from the beginning instead of having to rely on a more cumbersome bluetooth sync with your phone.

Now, it’s long been a goal of Google’s co-founders to make it even easier to search the Web, and years ago they suggested building a chip that would insert into your brain so that you wouldn’t even have to carry a device to do this. But last year, Google announced the Google Glass project, which was clearly more practical. Instead of eerily inserting a chip into your brain, Google wants you to just look into a lens built in such a way that allows you to interact with the Web visually.

By using voice commands, you’ll be able to control the screen on your lens, which will connect directly to the cloud. (Google apparently also wants to give you the option of connecting via bluetooth or Wi-Fi to your smartphone.) There’s no doubt Google is investing serious resources into its platform, and it’s likely to have a big edge considering its heft and the fact that it controls the Android platform that Vuzix is also using. Google says its device will be generally available in 2014, with developers getting access to it sometime in 2013.