Here we go again. The clouds part, and another iPhone descends from the heavens.

What mystical secrets will be written on the device’s extra-large, 640-by-1,136-pixel Retina display? Will there be earthshaking new features? Will it contain the answer to the question of life, the universe, and everything?

Not likely. Apple has entered a new phase in the evolution of its iPhone line, and you can pretty much forget about radical reinventions from now on.

The iPhone is now a mature product, and as with many mature products, the chief innovations will interest chief financial officers more than tech reporters like me: Expanding to new international markets and new carriers. Reducing dependence on sometimes-antagonistic partners like Google and Samsung. Marginal improvements to major features. Enough new features to maintain parity with chief competitors. And a few nifty extras, like rainbow colors (my favorite speculative iPhone 5 concept), to keep customers feeling special.

At this point, Apple has settled into its favorite spot: A comfortable No. 2. That’s because the company has always prioritized profits over market share and is happy to cede the latter as long as it can hang on to the former. 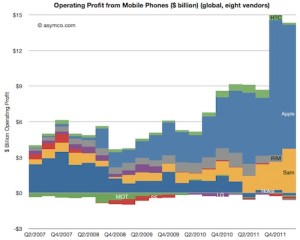 Horace Dediu’s analysis of Apple’s profit share earlier this year makes this crystal clear: Even though the iPhone is no longer the leading smartphone, it has by far the largest share of the market’s profits. But even the term “profit share” is misleading, Dediu points out, because it assumes that the total pool of profits is constant.

“The story isn’t so much that Apple ‘took the profits from the incumbents.’ Rather, it’s that Apple created a vast new pool of profits,” Dediu writes.

It did so by squeezing mobile operators, never anyone’s favorite companies, and by coming up with a model for how to make smartphones that was demonstrably better than anything that came before. Once they had seen it, millions of customers flocked to the iPhone, and dozens of companies followed with their own takes on the touchscreen phone. As Apple demonstrated conclusively in its recent court victory over Samsung, it has defensible patents to protect the iPhone, so competitors now have to find new, less derivative ways to make smartphones, while Apple continues to own the “rectangle with rounded corners” approach.

I’m not saying that Apple is sleepwalking its way to irrelevance. It remains a potent, prickly competitor, out to make no friends. It will continue litigating its patents and aggressively renegotiating business deals. If Samsung is proving difficult, it will source iPhone and iPad componenets from Sharp, LG, and others. If Google is rattling its sabers, Apple is more than happy to ditch Google Maps and build its own iPhone maps and then ditch YouTube and let Google release its own iOS app.

As long as Apple can maintain control over its entire ecosystem — including hardware, software, and services — and keep its customers rabidly happy, it will be assured of having the fattest margins in the smartphone industry, which in turn will help keep Apple the most valuable company in the world.

If you’re looking for radical reinventions, you’ll have to wait for Apple’s idea of a television. (If that happens.) In the meantime, look for a slightly better iPhone tomorrow. It won’t change the world. But then, it doesn’t have to.