U.S. retail giant Walmart is today accelerating the rollout of its mobile payment service, Walmart Pay, with a full statewide launch in both Texas and Arkansas, equating to around 600 stores across the neighboring states.

The news comes five months after Walmart first announced plans to take on the likes of Apple Pay, Samsung Pay, and Google Pay with its own mobile payment offering. In the intervening months, Walmart has been iterating the service and trialing it across a number of states, including Kansas, Missouri, and Oklahoma, ahead of a full national rollout, which is expected by the end of June.

Walmart Pay will work on Android and iOS with all major bank cards and with Walmart gift cards. The service is integrated directly into the existing Walmart mobile app, which counts millions of users.

To use the new payment offering, open the app at any checkout and hit ‘Walmart Pay’, then scan the QR code on the register’s screen using the phone’s camera to connect to Walmart Pay. And that’s more or less it; you’ll receive an electronic receipt in the app. 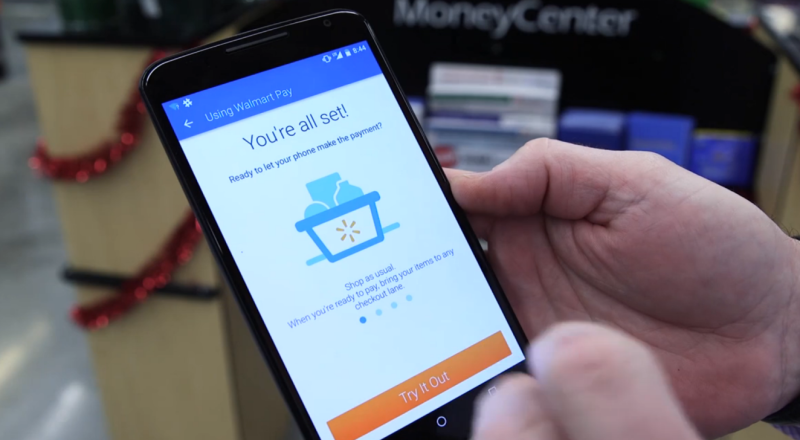 While the in-store mobile payments market is competitive, Walmart has previously indicated that its plans are perhaps less about competing with Apple, Google, and Samsung (which aren’t yet accepted in Walmart) than with simply making it easier to buy things in brick-and-mortar stores, thus tempting customers away from simpler online alternatives, such as Amazon.

“It was really a design around improving checkout, not just payment,” said Daniel Eckert, senior vice president of services at Walmart, in an interview with Fortune earlier this year. “When we looked at checkout, there was still friction in the process.”

Walmart claims that around 140 million people shop at its stores every week, so there is potential to speed up the checkout process to keep those lines moving. And later, there could be scope for allowing customers to scan items as they put them in their cart, which would expedite the process even more.

Walmart has been making a big push into the tech realm of late, recently merging its tech team in Arkansas — where Walmart is headquartered — with its technology division in Silicon Valley. The company also recently revealed plans to introduce drones for home delivery, similar to the project Amazon has been tinkering with.