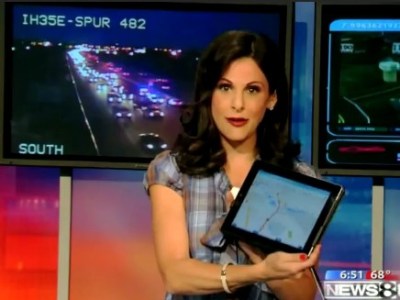 Thanks to its popular crowdsourced navigation app, Waze is sitting on a pile of valuable traffic data. Today the company announced an intriguing use for that data goldmine: powering your local TV station’s traffic reports.

Waze is launching a program to let any broadcast network take advantage of its citizen traffic data, which gives networks access to instant updates about traffic conditions. The company has partnered with 12 launch stations, which have been featuring Waze’s data in their traffic reports for months, including KABC Los Angeles, KGO-TV San Francisco, and KFAA Dallas.

“We’re thrilled to officially offer up our citizen traffic reporting to broadcasters,” Di-Ann Eisnor, Waze vice president of partnerships and platforms, said in a statement today. “We’re learning that the best local stations work at startup speed, so we can get each station up and running seamlessly in just under a week.”

Waze says it’s providing tools specifically for broadcast stations, including the ability to create branded commuter groups within its apps. This lets broadcasters directly communicate with their viewers, allowing for things like contests to choose a specific user’s traffic report. Waze says that ABC7 in Los Angeles has nearly 3,400 active members in its commuter group. While on-air, traffic reporters use an iPad to get access to Waze’s live data.

The company also announced that its apps are now being used by over 9 million commuters. That’s a jump of 2 million users since October, when Waze announced it raised an additional $30 million in funding. Clearly, the company has been growing like wildfire over the past few years, and this jump to powering TV traffic reports will only further its popularity among mainstream users. Once viewers see what Waze’s free apps can offer, they’ll have a hard time resisting the siren call.