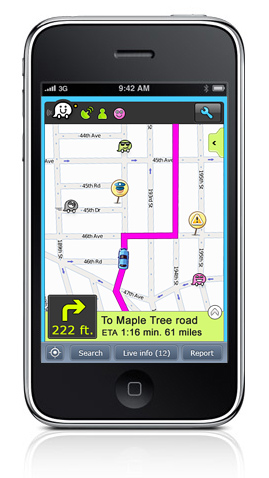 Waze, the company that offers driving directions based on crowdsourced data, is revealing some specific numbers to illustrate its progress. The company just shared its users numbers and also announced its first deal with a map provider.

The company first launched its mobile application in Israel, then moved to the San Francisco Bay Area and beyond last year. (It’s based in Israel and Palo Alto.) Now it has 500,000 users, who contribute to Waze’s data by leaving the application open on their GPS-enabled phones as they drive, feeding map and traffic information back to the application. 5,000 users are more active, making edits to the various maps, and 550 users even more active than that, working as area managers who oversee the editing.

Waze now has maps in 85 countries, chief executive Noam Bardin said. 70 percent of the application’s traffic is coming from the United States, while 19 percent comes from Italy — the dominance of the US makes sense, but Bardin had a harder time explaining why Italy has taken off so strongly.

The application is free, but in the past Waze has said it wants to make money through data-sharing deals with map companies. It just announced its first deal, with South American company Location World. Both companies benefit — Waze gets maps to use as the foundation for its application, and Location World gets to update its map based on Waze’s user data.

There are more deals to come, Bardin said. Companies have more incentive to work with Waze after Google’s announcement in October that it’s offering free turn-by-turn directions. Google is now trying to buy up map data around the world, he said, but mapping companies aren’t excited about working with the search giant, because they know those free directions will eventually undercut them.

“They realize you need to prepare for the free world ahead of time,” Bardin said.

By crowdsourcing the data collection, Waze is able to cut the costs and also bring the information into real-time. That’s particularly important for traffic information, because that allows users to see the actual speeds that drivers are moving on a specific route at that moment.

Beyond these deals, Bardin is interested the revenue opportunities in mobile advertising. However, that market is very immature, and he said, “It’s not something anyone’s going to see any money from in the next 10 years.”

For drivers, there are new features coming too. Waze’s experiment with adding a gaming element to the app with “Road Goodies” caught on with 24 percent of drivers, who drove an average of 150 percent further to gain rewards in the game (pursuing those rewards helps Waze fill out its maps), so Bardin said he wants to follow-up with other gaming features. He also plans to add personalized alternate routes, so Waze can remember the different routes you like to use for your commute, and can recommend the best one, time-wise, on a particular day.