Wearality‘s virtual reality glasses sure look dorky, like the biggest pair of Coke bottle glasses you’ve ever seen. But the glasses use innovative optics that make it much easier — and cheaper — to view and enjoy virtual reality applications. Think of it as a View-Master for virtual reality.

The Wearality Sky is like a huge pair of glasses, with an attachment that allows you to drop a large-screen smartphone into a holder a couple of inches from the lenses. And while they look goofy, they’re a lot more comfortable for viewing than attaching a heavy Samsung Gear VR virtual reality headset to your face. The glasses are the low-cost alternative to upcoming VR goggles such as the Oculus Rift from Facebook’s Oculus VR division and the Vive from HTC, which uses technology from Valve.

“It’s kind of dorky in some ways, but the other devices are like massive Darth Vader helmets,” said David Smith, chief executive of Wearality, in an interview with GamesBeat. “We are in the age of dorkiness for these things. But we will spend a lot of energy on it to make these things look cool. When you use it, all you see is the phone.”

The Wearality Sky should also be a lot cheaper, at least well under $100, when they debut as early as July 2015 for early backers of its Kickstarter crowdfunding campaign, which begins today. The first 250 early-bird backers can preorder glasses for $49, for delivery in October 2015. Wearality hopes to raise $100,000 over 30 days via its Kickstarter campaign. 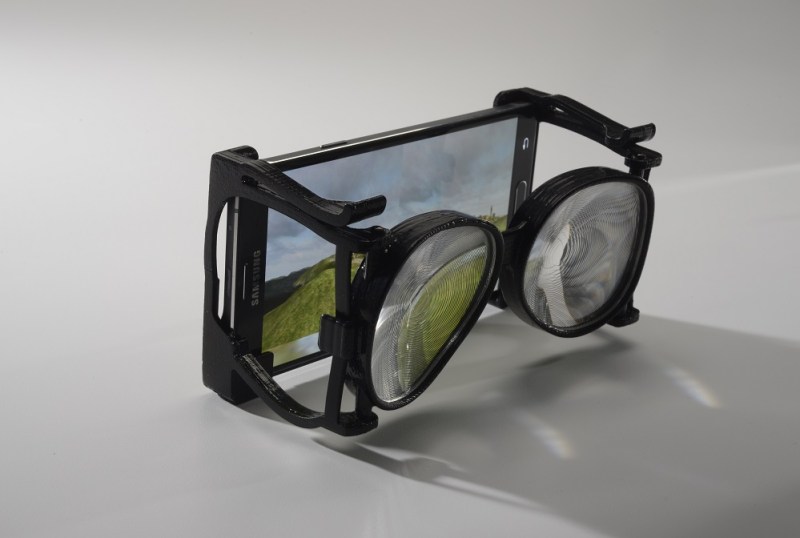 Others who preorder the commercial device can get the device for $69, for delivery in October 2015. I’ve used the glasses, and they work perfectly fine with VR applications on a big LG smartphone. The apps include those created for Google Cardboard, a platform for inexpensive VR that combines with a smartphone to help you feel like you’re immersed in a virtual environment.

“We think of it as an entry-level device for Google’s Cardboard system,” said Smith. “We think it is well positioned to evolve, as smartphones and displays get better. They may look like Coke bottle glasses. But it is a high-quality end result. It is a trade-off.”

The technology comes from Mountain View, California-based startup Wearality, which spun out of Lockheed Martin, the world’s biggest defense contractor.

Originally used by the aerospace and defense industry for virtual and augmented reality training, the lenses give you a 150-degree field of view. That’s a wider field of view than the Oculus Rift. It works with any 5-inch or 6-inch smartphone screen. Any application built in Unity will likely run on Wearality.

The product team is led by Smith, who has been an AR/VR advocate for more than 20 years. In 1987, Smith created what he calls the world’s first 3D interactive game, The Colony, which became a cornerstone in the creation of a virtual set and camera system for James Cameron’s movie The Abyss.

He went on to cofound Red Storm Entertainment in partnership with Tom Clancy, among other projects. In addition to his duties at Wearality, he currently still works at Lockheed Martin. Smith and Gunnar Wieboldt, chief operating officer of Wearality, started a virtual reality company about nine years ago and sold it to Lockheed Martin so it could be used in real-time 3D training simulations. They built things like high-end flight simulators. Then they joined the team to design next-generation wearable systems.

The team took about five years to develop the state-of-the-art optics in the plastic display. They’re making the lenses in the final device smaller and thinner. The next version will be the one that ships.

“We believe this portable device will be something that you can fold and put in your pocket,” Smith said. “It is accessible, and there’s no need for the user to adjust it. It’s lightweight, and you can share it with someone next to you.”

Is it like the View-Master from days gone by? In the sense that it is accessible and low-cost, Smith says yes.

And as for seasickness, the Wearality Sky can be much better.

“Most of the problem with simulation sickness is from a lack of field of view,” Smith said. “You look through a tunnel. It is lacking peripheral vision info. That is huge in establishing location for the brain.” 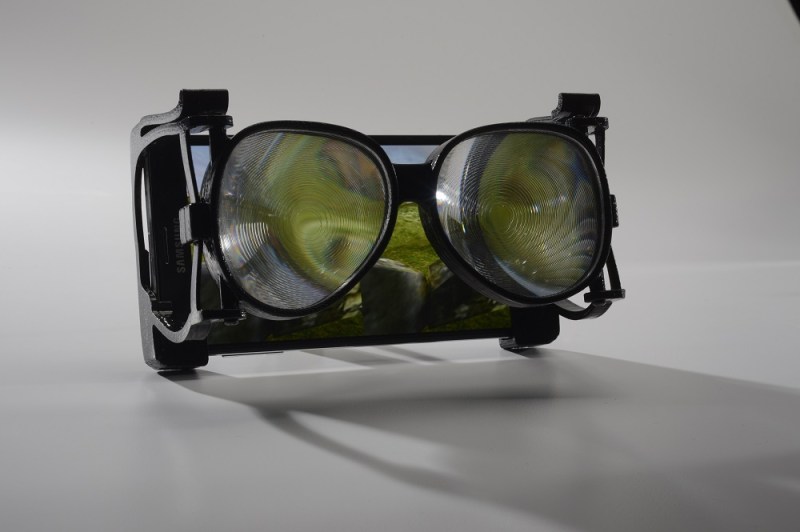 Above: Wearality’s VR/AR glasses with smartphone.