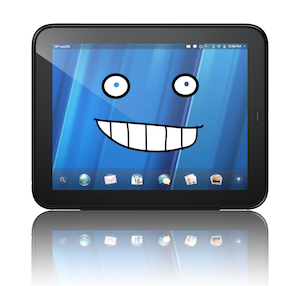 Hewlett-Packard chief executive Meg Whitman says tablets are still in the cards for the newly open sourced WebOS, despite lackluster sales for the mobile operating system’s original product, the Touchpad.

Whitman and investor Marc Andreessen of venture firm Andreessen-Horowitz explained to The Verge that HP is not ready to give up on WebOS devices just yet. It believes the operating system is only going to get better with more hands contributing to its development under the new open source model. These potential devices include tablets, but not smartphones, as the company has become disenchanted with the mobile product.

“In the near term what I would imagine – and this could change, in full disclosure – is I would think tablets, I do not believe we will be in the smartphone business again,” the duo told The Verge.

The timing is still on shaky ground, even internally for HP. Whitman was careful to explain that the company couldn’t promise anything for 2012. Producing the device will require team formation, which Whitman says will take time to carefully construct. She also noted that the new teams would go in a “different direction than we’ve been taking it in the past.”

Part of the desire to continue the tablet may come from HP’s success with the Touchpad’s discounted sales. WebOS is actually a desirable operating system for tablets. It’s popularity originally stemmed from the ability to multitask — a gripe many have had with Apple’s iOS. Multitasking is the ability to load and use an application while another is open. This is particularly appreciated when it comes to web browsing. Instead of waiting for a page to load, you can leave the page as you would on a computer and return to find it ready for action.

HP is having another sale of its Touchpad starting December 11. This sale takes place only on eBay and features $99 and $149 Touchpads, which have been refurbished.