Facebook may be looking to better compete with blogging platform Medium after it overhauled its long-forgotten Notes feature last month, but Tencent told VentureBeat it’s not out to compete with Evernote with its latest iOS update to WeChat.

However, China’s top mobile messaging platform, with 600 million users and counting, added some very Evernote-like functionality in an update Thursday that allows users to save and share “rich-media” clips in the cloud.

Whereas before users could only save individual photos, bits of text, or URLs as “favorites” to be accessed later, now they can create what are essentially searchable Evernote-style clips. These include audio, images, URLs, music, video, location, tags, and of course, text, all in one clip.

Favorites can then be shared via instant messages with friends, though not to WeChat’s Moments feed. For those unfamiliar with the app, the Moments feed is essentially like Facebook’s news feed where users can share public updates to their social network. 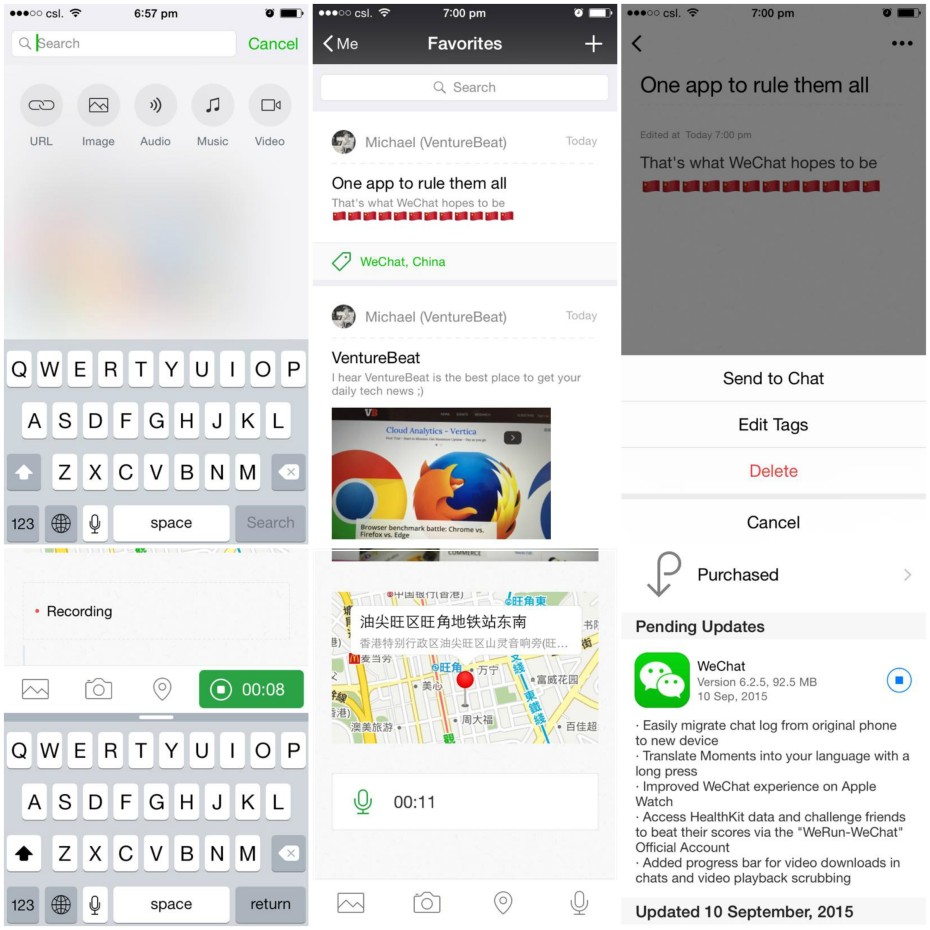 Above: A collage of screens from WeChat’s iOS update. VentureBeat / Michael de Waal-Montgomery

If a user likes the favorite they have received through a chat, they can then favorite it themselves and send it on to their friends.

But by keeping this as an essentially walled-in experience (i.e. the favorites are not shared publicly to the Moments feed), it seems that the potential for content created this way to go viral is much smaller.

That said, I could imagine scenarios whereby favorites created by celebrities (or other notable WeChat users) become much sought-after, precisely because it’s a content category that is shared exclusively from friend to friend and therefore not available to just anyone.

While a Tencent spokesperson wanted to make clear that it’s not looking to compete directly with apps like Evernote, it’s by now common knowledge that WeChat has grand ambitions to be much more than a chat platform.

I’m just not sure whether Evernote is watching this move and laughing — or is actually taking it quite seriously in terms of what it may hint at for the future evolution of WeChat, with its hundreds of millions of users (who are no longer only in China).

Tencent confirmed that the update has only been rolled out to iOS users, so far.