Western Digital has unveiled its second-generation UFS 3.1 storage products for a new generation of 5G smartphones. It won’t be long before you’ll have 512GB of storage on your smartphone.

The San Jose, California-based company said its new flash memory chips will deliver the performance and capacity to support the data-rich multimedia applications smartphone users expect in a 5G world.

Western Digital spent $18 billion on factories over the past decade, and it’s on its 10th generation of flash memory. Every flash manufacturer licenses tech from Western Digital.

The Western Digital iNAND MC EU551 delivers the high-performance storage consumers need to be able to use their phones for emerging applications like ultra-high-resolution cameras, augmented reality and virtual reality, gaming, and 8K video, Itzik Gilboa, the senior director of mobile segment marketing at Western Digital, told VentureBeat in an interview.

“We are introducing our second-generation product,” Gilboa said. “And the key drivers for it are graphics, larger files, moving from 4K to 8K video recording, the advent of 5G and Wi-Fi6E, [and] requiring faster communication, as well as new and novel applications brought upon by AR and potentially some AI training requirements.”

He added, “All of these things are converging on the requirements that we think we can meet with a new generation of UFS 3.1 coming out. When we move from 4K to 8K, we’re almost doubling our memory profile. If you’re recording at 60 frames per second, you get a 600-megabyte file at 4K, and moving to 8K it’s 1 gigabyte.” 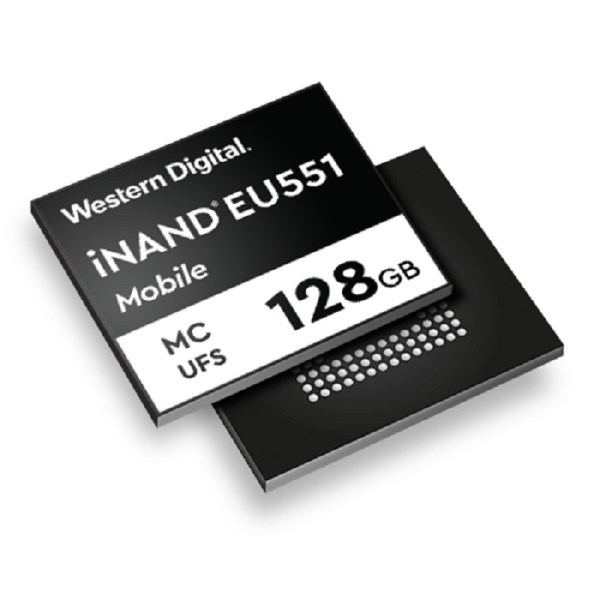 Above: Western Digital’s iNAND EU551 can store 128GB or more.

Western Digital also said the chip has a 90% improvement in sequential writes to help realize the new 5G and Wi-Fi 6 download speed potential. This gives consumers a better experience when streaming rich media files such as 8K video, as well as improved performance for applications like burst mode photography. And it delivers a 30% improvement in sequential reads that lets applications launch faster with shorter boot-up time and enables faster upload speeds.

The device is designed to meet the JEDEC UFS 3.1 specification requirements and uses the latest Write Booster technology based on Western Digital’s 7th generation SmartSLCTM. It also features Host Performance Booster version 2.0, further combining the latest advancements in the standard.

“You can see that average capacity continues to grow, and we’re seeing phones coming out with 1 terabyte this year,” Gilboa said. “And 8K recording capability — you can question if it’s needed today or not. But we are addressing that need today. And then if you look at the feeds and speeds, as we are moving from 4G to 5G, the 5G is introducing a step function in connectivity requirements from about 100 megabytes per second to 500 megabytes per second today and then going into 1 gig next year — and perhaps 2 gigs per second later.”

Wi-Fi6 is expected to move to Wi-Fi7 in 2024, and that’s going to deliver 5G-like performance at that point.

“That requires our interface speeds to keep up as well,” Gilboa said.

Application installs are going to eat up more storage, and accessing that data quickly is going to be important. Applications like games and AR will have to run at low latencies, and AR will have to accurately superimpose animated imagery on the real world. That requires processing a lot of data from sensors and storing that information too. That’s why 512-gigabyte capacities won’t be unusual for smartphones. 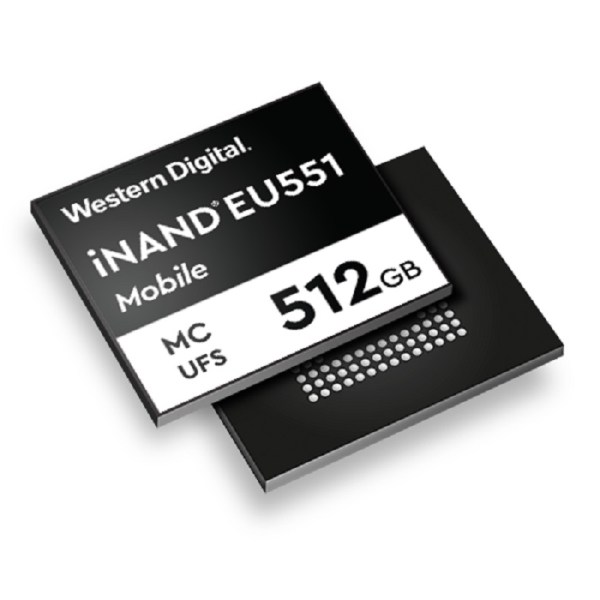 Above: You can store 512GB of data on a smartphone with this Western Digital chip.

The iNAND MC EU551 is the latest addition to the iNAND line, which has been trusted by all major smartphone manufacturers around the world for more than a decade. As part of its work in the mobile ecosystem, Western Digital continues to work with SoC designers to qualify its UFS 3.1 solution for smartphone reference designs that offer a pretested solution for manufacturers to integrate.

The Western Digital iNAND MC EU551 UFS 3.1 embedded flash drive (EFD) is sampling now with volume availability planned for July 2021. The storage solution is available in 128GB, 256GB, and 512GB capacities. Smartphones with flash memory should come out by the end of 2021.

If you’re ever planning a trip to the Alaskan wilderness and want to stream live video of a bear chasing after you to your friends back home, you might want to take one of these along. The servers can deliver high speeds and capacity for real-time analytics, AI, deep learning, ML training and inference, and video transcoding at the edge.

“We do some specialized servers, transport devices to transport data from site A to B or on-premises to the cloud,” Hamilton said. “And that’s kind of a derivative of that we got into the edge servers.”

In the case of the recent rugged servers, Hamilton said Western Digital thinks of that as the remote edge, where users can get a cloud-like experience, but without traditional datacenters.

“We saw we need to be able to provide cloud services in a more remote or edge-like environment,” he said. “It was a derivative of some of those customers that were already familiar with our devices and our vertical platforms. But we’re providing more of a robust continued capability. So that’s kind of the byproduct of how that came to fruition.”