I spent one week using Motorola’s revamped Moto 360 smartwatch with an iPhone — so you don’t have to.

The 360 is now available for pre-order, and while Motorola nailed it in terms of coming up with what looks and feels like an expensive accessory, the experience too often falls flat. In fact, I got compliments on how nice it looked, but felt morally obligated to explain that it didn’t do much for me.

Let’s take a closer look at the gadget — the design, battery, the maligned “flat tire” – before coming to a verdict on whether the watch is actually worth the price tag (the most basic model starts at $299 and it runs as high as $450).

The Moto 360 comes in three models; that is, two sizes for men and a one-size-fits-all for the ladies, all of which are customizable online. This gives users quite a lot of options in terms of personalizing the look of the gadget— at least to a certain extent, but I’ll talk more about that later. Each gender gets one color that the other does not, and there’s also a special double grab wristband only available for the women’s model — sorry gents.

In one corner: The guys get stainless steel in silver, gold, and black. The watch comes in two sizes, the original 46mm case and the new, smaller 42mm version. In the other corner: The girls get silver, gold, and rose gold (and it’s a real rose gold-inspired color, not the iPhone 6s’ apparent pink pearl hue) in the smaller, 42mm size.

In either case, the bands are not fixed and are interchangeable with other bands of the same model.

Give some love to the ladies

For the first time ever, Motorola designed a watch for women. The mobile company says it did some studies to come up with the proportions of the gender-oriented watch.

“We are not a one-gender world, and there are many tech-embracing women, like myself, and I always felt a little left out of this category,” one of the heads of design for the watch, Katie Morgenroth, told me when I asked her why they created a watch specifically for women. To me, the decision just implies that the first watch was not unisex; it was for men.

The moment I laid eyes on the new 360, it reminded me of Michael Kors’ watches. That has something to do with their round shape, which I prefer over Motorola’s squared competitors.

I went to Motorola’s customization site, Moto Maker, and created my own. I kept it classic. I went for an all-rose gold women’s watch with a wristband of the same color. I also pushed it a little further with a $20 upgrade for a line-carved Bezel instead of the plain one. With all the upgrades (I selected every one), the watch came to $399. 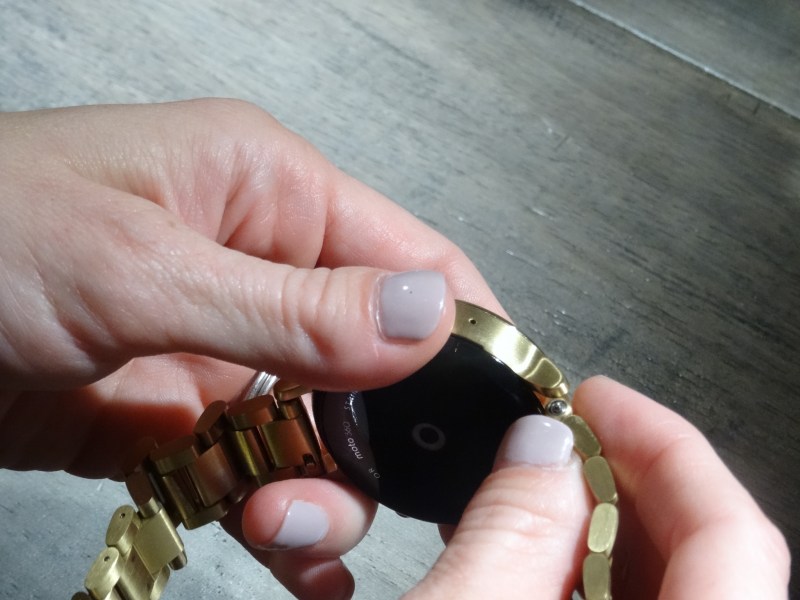 Once it arrived, the watch looked even better in person. It’s heavy enough to feel expensive, but not so much as to become uncomfortable. The biggest disappointment was something I was aware of from the moment I first saw it: This watch is a bit too small for my taste.

I’m a tall woman and my body is proportionate to my height. My hands are big, my arms are long, and I like bigger, thicker watches. The Moto 360 does not get lost on my wrist or anything like that, but I would like the option to wear something that fits my body type.

“The original 360 at the 46mm, larger case size just feels too big. It feels maybe more like technology and less like a fashion statement,” said CXD design director Dickon Isaacs, when I asked him about the design choice.

I am sorry, Mr. Isaacs, but I think we’ll have to agree to disagree: A big watch is not less of a fashion statement. If anything, it’s quite the opposite. If you don’t believe me, ask Michael Kors. 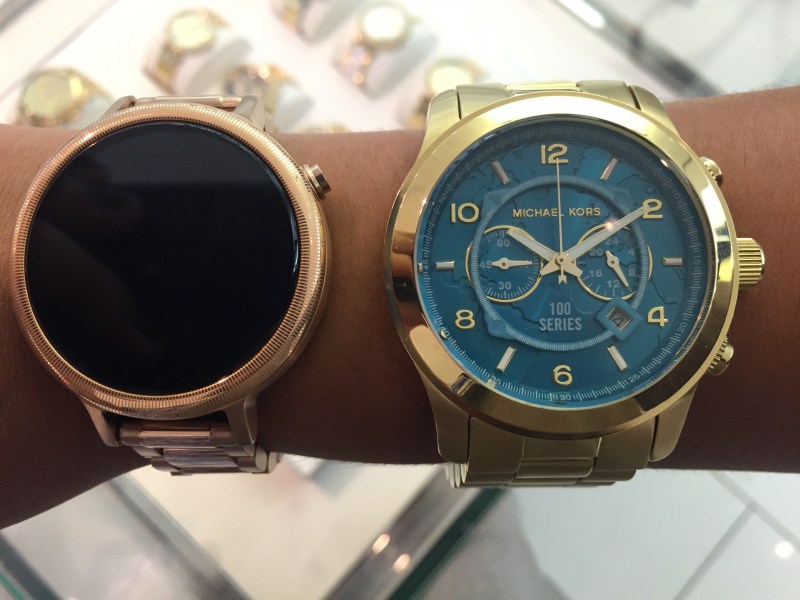 I like chunky watches as my statement piece, and I felt I should have the option to order one, just like the guys.

Isaacs’ response to my demand was simple: “Well, you can get the men’s watch.”

The watch is powered by Android Wear, so the experience will feel familiar if you’ve ever owned a smartphone powered by Google’s OS.

I own an iPhone, and I was worried I would not be able to pair the device to my phone. Thankfully, I was able to sync the two pretty easily.

The process was seamless and self-explanatory. The watch turned on and a couple of minutes later it prompted me to charge it to at least 50 percent before the first use — just like my old Motorola phone. 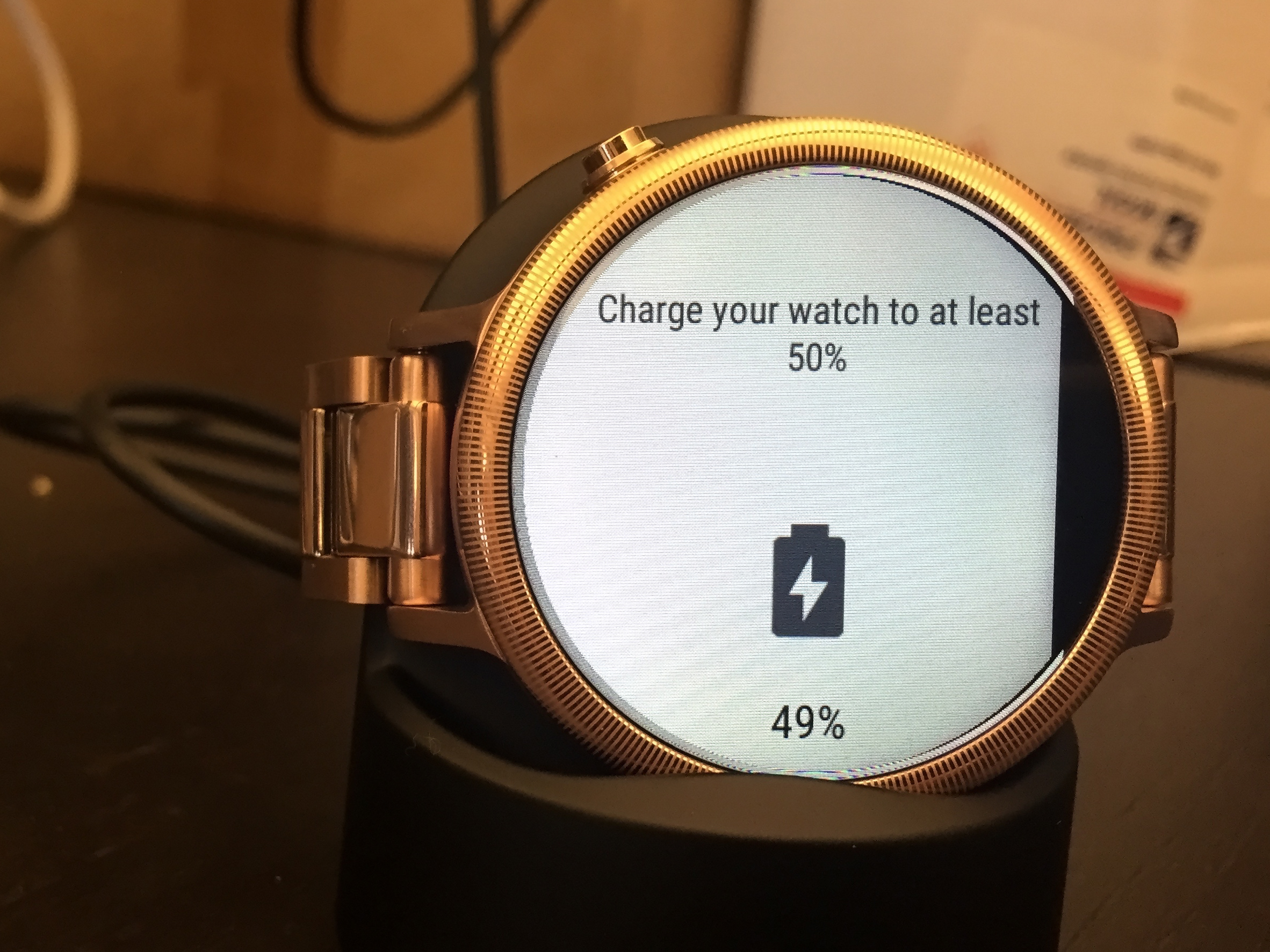 As the Moto 360 charged, I paired the devices, watched a short tutorial video, and then the watch guided me through the basics (pull down to access settings, swipe left from the home screen to get to the apps, swipe up for the tabs in use, left again for more options, and right to dismiss a tab).

When the wearable is paired to an Android phone, you can connect to Wi-Fi for web access when you don’t have your phone, you can answer texts, and you can access maps (read more about what Android Wear lets you do here). However, that is not the case for iPhone owners.

With an iPhone, the Moto 360 watch functions as a notification center and controller, and it doesn’t do much when your phone is not around. Yes, I can look at the time, set an alarm or a timer, and turn on the flashlight, but that’s not all that impressive for a smartwatch. While connected to my iPhone, I can check the weather, look at notifications from Twitter and WhatsApp, stop and change songs – even from Pandora and Spotify, answer phone calls on my phone (because the watch doesn’t have a speaker), and check in on the stock market (?!).

But I can’t reply to messages, I can’t look up an address on maps, and I can’t start an app from the watch. I have to go to the phone to do all of this. If I ask “Okay Google” for help, it sends an alert to my phone so I can do it from there.

Let me remind you again, I’m using the 360 with an iPhone. If you own an Android smartphone, enjoy your native experience — kudos to you and your functional watch-phone relationship.

Of course, Google and Motorola have not set high expectations for Android Wear-iPhone support, but I was still optimistic that most things would function properly. 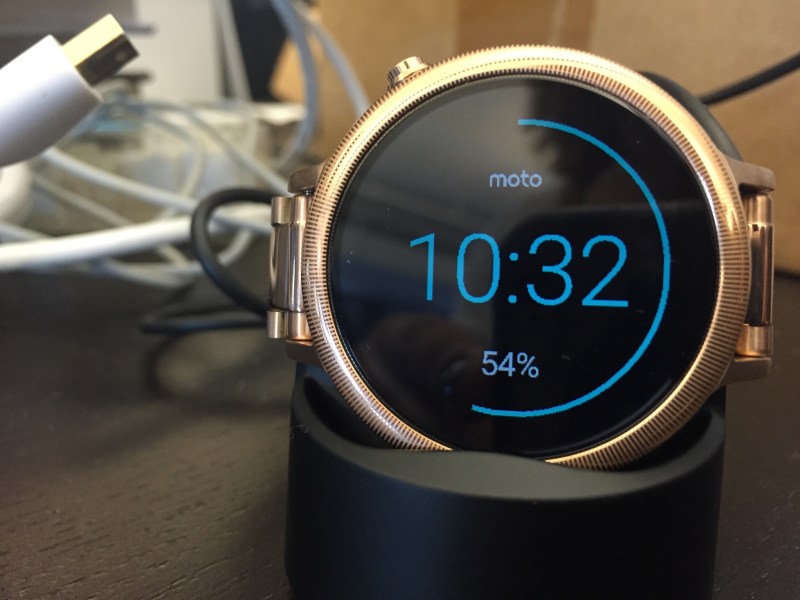 The 360 comes with a heart rate sensor and Motorola’s Moto Body app. The feature tracks my steps, heart activity, and it even attempts — and succeeds — to motivate me to stay active. This is one thing that Apple’s Health app has not been able to do, but that the 360 proved I need in my life.

I would love to use this watch at the gym or on a run, but it turns out I’m not really supposed to. That’s what the Moto 360 Sport is for, Motorola told me. The Sport version comes with extra features like built-in GPS, which is not present in the fashion version because, as a Motorola representative put it, the company “felt like if you were to have your phone, why would you have a GPS antenna on it?”

His argument only reinforced my point: my 360 doesn’t do a lot when a phone isn’t around.

When I got the watch, I charged it to almost 100 percent in the wireless dock. In its resting position, it looks like a small table clock.

The battery lasted for about 36 hours — a lot, considering I played with it as much as I could.

The only problem was that I forgot to charge it, as I often do with my phone, and I was left without a watch for the rest of the second day.

What I thought was a big deal, wasn’t

“The flat tire” is what some people call the blank space at the bottom of the screen that has been present since the first generation of the Moto 360. Motorola explained to VB why the 360’s display still isn’t a perfect circle, and the company called it “the best design decision” it could make.

But in my opinion, the space – called a shelf or flat tire – is something you’ll grow accustomed to. I easily ignored it after picking a dark watch face. 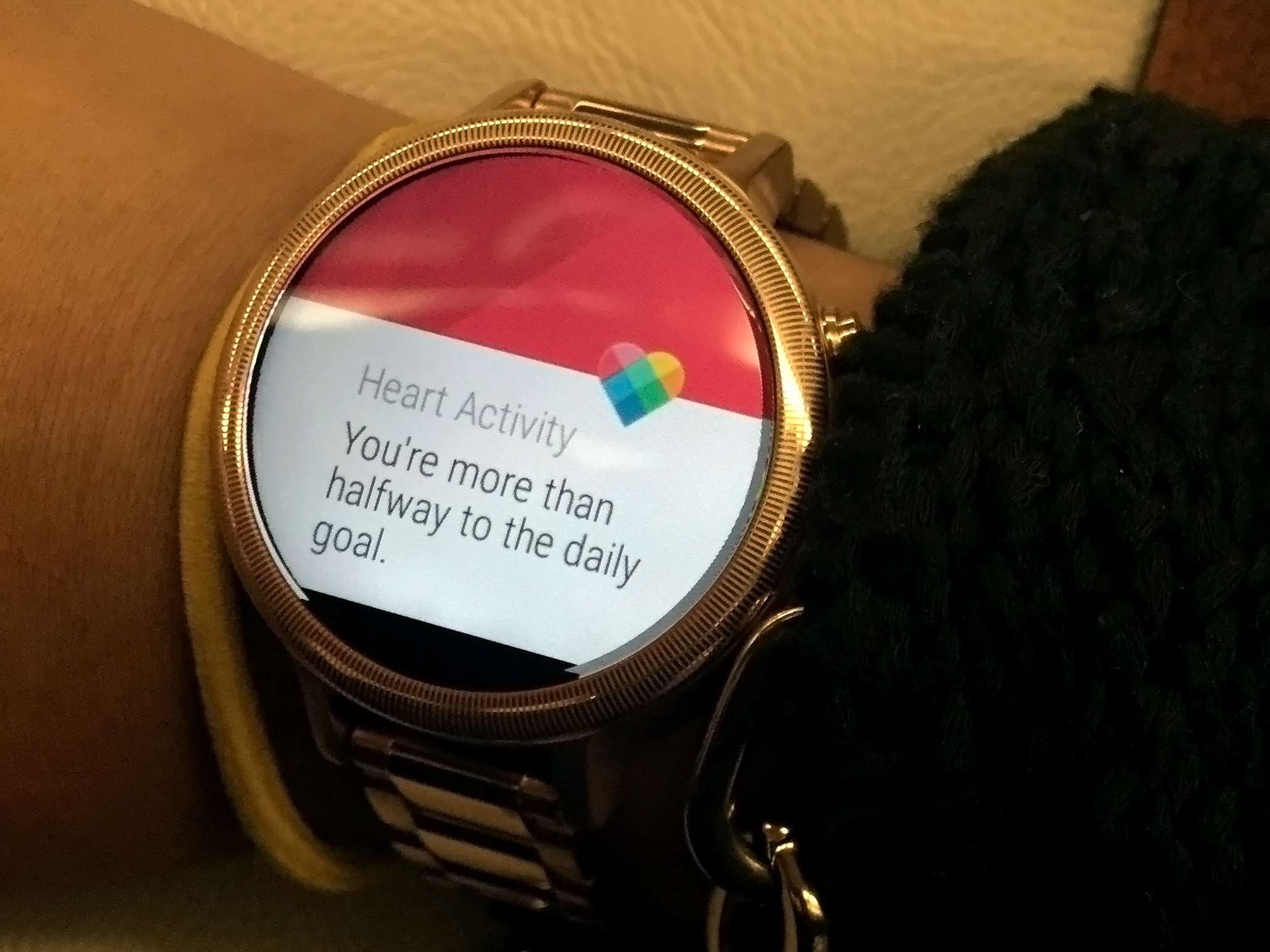 Yes, this watch does things a regular watch doesn’t do — it lets you answer phone calls and pause Pandora — but that isn’t enough if you’re looking for a truly smart gadget. Maybe Motorola will win me over next time? Maybe by then Android Wear will work more seamlessly with my iPhone? That’s unlikely, but I can always hope.