In 2016, mobile app store downloads reached over 90 billion, while total time spent in apps worldwide increased to nearly 900 billion hours. From a business perspective, the app economy proved to be more lucrative than ever, paying publishers over $35 billion in revenue across the iOS App Store and Google Play. 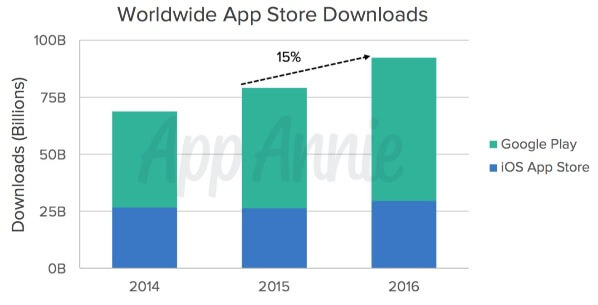 2017 is set to be another banner year for the app ecosystem. Here are some of the hottest trends from the most successful players in the space:

Retail apps skyrocketed when Black Friday 2016 was the first day to ever generate more than $1 billion in U.S. online mobile sales. Mobile accounted for 44 percent of retailers’ online traffic and 31 percent of sales in 2016. During the first three-quarters of last year, time spent using shopping apps was up 52 percent year-over-year. But users on average spent more time in digital-first retailers, like Amazon and Wish, than bricks-and-clicks apps, like Walmart and Target.

The retail app space is guaranteed to continue to climb as users become more comfortable with mobile shopping and spend more time in these types of apps. But with the digital-first players currently driving the charge, traditional retailers must continue to invest in their app strategies to stay competitive.

Streaming apps like Netflix and Spotify successfully remained in the top five overall grossing apps of 2016. The top five streaming apps include YouTube, Netflix, ESPN, CNN, and Amazon Video. Additionally, the top three streaming apps experienced massive revenue gains in the U.S., China, and the UK, proving that consumers are willing to use in-app purchases to pay for these type of subscription services.

With the war between the major video streaming services in full swing and revenue skyrocketing across the board, traditional entertainment players will need to rethink their strategies to court a mobile audience. Netflix led the way in app store revenue across U.S. and U.K. markets, primarily driven by its introduction of in-app subscription purchases. Those who cater to the convenience of their mobile consumer with see bottom-line benefits.

Banking services, both from established bankers and those developed by non-traditional fintech companies, such as Venmo, Credit Karma, and PayPal, saw an increase in the number of people using their apps. These newer services have the potential to upset traditional retail banking models, due to the ease of use, convenience, and the social factor. But big banks still lead the way: Chase took the No. 1 spot among retail banking apps, with almost 200 million monthly active users, followed by Bank of America, Wells Fargo, Capital One, and Discover.

The battle between retail banking and fintech apps will absolutely rise as we continue through 2017. While traditional retail banks have the advantage of their longstanding user base, fintech apps already have their digital-first and made-for-mobile foot in the door. Mobile apps will continue to transform banking, and players who best adapt to a mobile-first experience will come out on top.

And then there’s gaming. Pokémon GO will be remembered as the most memorable app of 2016, if not of all time. By attracting millions of non-gamers, it reached a level of success that even eludes some of the top traditional video games. The game reached $800 million in consumer spend in just 110 days (by the end of 2016, it had reached over $950 million).

Pokemon GO’s impressive monetization in 2016 highlights the viability of novel gameplay ideas in mobile gaming. As we saw from the followed success of Super Mario Run, key players in the gaming space will need to adopt new strategies that offer this type of appeal. These milestones, along with other innovations in VR, set a precedent for gaming in 2017. It will be exciting to see how they all play out.

This year will provide businesses across every industry with new opportunities. There’s no telling what this year’s Pokemon will be, but we do expect the app economy to deliver $189 billion to app publishers by 2020.