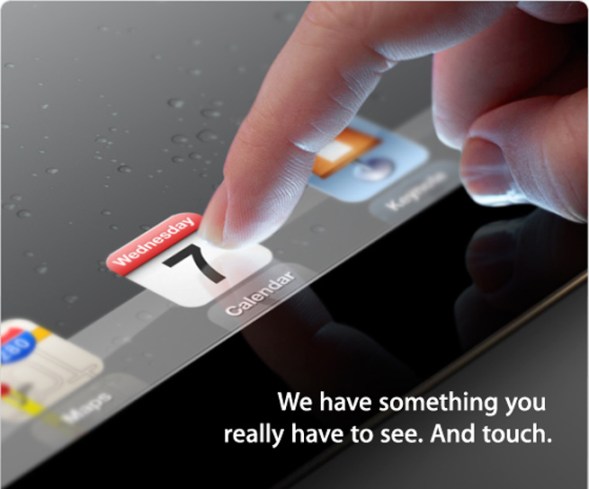 Apple is almost certainly going to unveil its next iPad at a media event on Wednesday, and by this point it seems like the juiciest upgrade — its incredibly high-resolution screen — is a given.

Still, there are plenty of other rumors about the iPad 3 (which could be called the iPad HD) that we’re keen on seeing confirmed or debunked. And more so than specs, it’ll be particularly interesting to see how Apple will contend with Windows 8, Microsoft’s ballsy attempt to unify tablets and desktops under a single new OS.

Apple announced its iPad 3 event in the middle of the Mobile World Congress last week — a shrewd maneuver meant to deflect attention from the conference in Barcelona, and notably from key attendees like Google, Android tablet manufacturers, and Microsoft. The announcement certainly caused a stir at Mobile World Congress, though it didn’t dominate the conversation at the event as Apple fanboys would have you believe.

The invitation above was sent out to journalists, with a clear indication that it’s going to be an iPad-related event. Past Apple invites have hidden clever clues about the upcoming events, but so far nothing has been unearthed about this one. (One possibility might be to closely compare the icons above to the iPad 2, but the image isn’t high-resolution enough to tell us much.)

When the iPad 1 was released, its 1024 by 768 display was definitely one of its weaker aspects. After all, that was a resolution commonly found in PC displays a full decade ago. Come the iPad 2, which shares the same low resolution, its display was shamed even further when compared to the iPhone 4’s Retina Display, which packs in an astounding 326 pixels per inch with its 960 by 640 pixel resolution.

So at this point, it seems like Apple has no choice but to bump up the iPad 3’s display to something resembling Retina quality. Word is that Apple is planning to include a 2048 by 1536 resolution display in the iPad 3, four times the resolution of the current iPad display.

Rumors surrounding the higher-resolution display, which will likely be dubbed “Retina Display” as well, have been floating around the web for over a year now. But the reports have become even more solid with evidence in Ars Technica’s server logs. MacRumors even took a purported iPad 3 display under a microscope and confirmed plenty of new pixels.

The higher-resolution display will not only make text and pictures sharper, it’ll also make the iPad 3 the only tablet to support 1080p high-definition at its full resolution (1920 by 1080). Android tablets have been sporting 720p HD displays (1280 by 720) for some time now, but if the reports are true, the iPad 3’s display will blow Android slates out of the water.

And as Ars Technica points out, the only readily available display to run such a crazy resolution now is a $5,000 NEC monitor meant for medical usage. It’s also worth noting that that NEC screen is 21.3-inches . At a mere 9.8″, the iPad 3 is squeezing all of those pixels into a much smaller screen, which means it will likely sport the sharpest display we’ve ever seen.

More horsepower under the hood 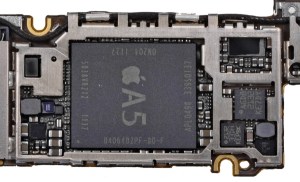 For the longest while, the rumor mill has been pointing to Apple using a new quad-core chip for the iPad 3, dubbed the A6. But a recent posting on a Chinese forum, which shows an A5X processor on an iPad logic board, says otherwise. The A5X is assumed to be a slight upgrade to the current dual-core A5 chip used in the iPad 2 and iPhone 4S.

I have no doubt that Apple is working on a quad-core A6 right now, as it’ll need such a chip to compete with the quad-core Nvidia Tegra 3 and upcoming Qualcomm chips. The real question is if the A6 will be ready in time for the iPad 3.

Some have argued that Apple would need a quad-core chip to drive the iPad 3’s high resolution display, but Apple could still manage to eke out enough performance with an A5X chip to take care of that problem, especially if it added more RAM. And of course, it would be cheaper for Apple to produce a chip based on an existing design, rather than start churning out something entirely new.

We’re already seeing quad-core tablets on the Android side, but just like Apple’s choice to stick with its 3.5-inch design for the iPhone 4S in the face of massive Android phones, we don’t expect Apple to leap into the quad-core arena just because Google has.

LTE 4G (which will be a bigger deal than you think)

With LTE 4G service now readily available from Verizon and AT&T across the U.S., it makes sense for Apple to finally move beyond 3G with the iPad 3. And for many consumers, the addition of ultra-fast 4G connectivity on an iPad would be far more appealing than a quad-core CPU. You can feel the speed of 4G instantly, whereas the benefits of a quad-core CPU aren’t nearly as immediate.

The iPad is already a magical device to consumers, but the addition of an always-on 4G network as fast (and in some cases faster) than their home broadband would make it seem downright miraculous.

More so than the 4G smartphones on the market, the iPad 3 could end up being the killer LTE device that AT&T and Verizon have been praying for.

And what of Windows 8? 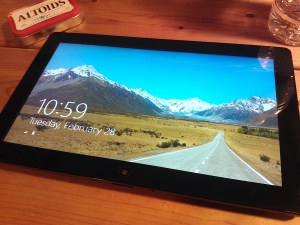 Even though Microsoft has tried and failed with tablets several times (remember the Ultra-mobile PC fiasco?), it looks like the company has finally figured things out this time around — so much so that I think it can teach Google a thing or two about tablets.

Apple has been slowly trying make Mac OS X more iOS-like, especially in the latest Mountain Lion release, but with Windows 8 Microsoft has the advantage of offering tablets that can do everything a Windows desktop can.

Despite all of its keyboard docks and other accessories, that’s an experience Apple can’t yet offer with the iPad — even with the addition of a nicer screen. You can certainly argue that it’s better for Apple to focus entirely on the mobile experience with the iPad, but it’s clear that there’s a convergence afoot between the mobile and desktop worlds.

Thanks to the rise of smartphones and tablets, we want to touch and swipe all the screens we come across. Windows 8 is ready for a world where laptops and desktops sport touch screen displays, and where the difference between an ultraportable laptop and a tablet are negligible.

Microsoft’s Windows 8 tablet plans could still flame out entirely, but at least it’s looking to where the industry is headed, instead of futilely trying to catch up with the status quo.

The iPad 3 is expected to launch with the latest iOS release, iOS 5.1. And with a high-resolution screen, it’d make sense for Apple to dramatically improve the iPad 3’s camera. I’m expecting a 5 or 8 megapixel shooter that can record 1080p video on the rear, and an improved front-facing camera capable of 720p HD video.

Tune in on Wednesday for more

VentureBeat will be reporting live from Apple’s iPad 3 event on Wednesday, so keep your eyes peeled for the official announcements and analysis.