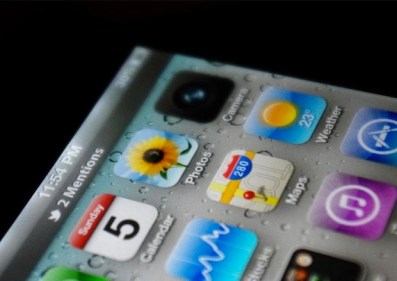 Apple is gearing up to kick off its Worldwide Developers Conference Monday morning, so it’s no surprise that the Apple rumor mill has been in full effect this weekend. We already know that Apple will discuss iOS 5, Max OS X Lion, and iCloud at WWDC, but the specifics have so far eluded the tech community.

So far, we have what may be an early glimpse at the new notifications system in iOS 5, as well as word that Apple’s Time Capsule may get a major upgrade to work with iCloud.

The purported iOS 5 notification screenshot (right) comes from TechCrunch’s MG Siegler, who’s definitely hedging his bets on the image’s accuracy. It features a Twitter notification showing up on the top of the iPhone’s screen, instead of in a garish message in the middle of the screen. Siegler notes that this particular design would already fit in well with the current iOS workflow that puts tethering and mid-call notifications at the top of the screen. His sources say the image has the “right idea.”

Apple may also announce extensive integration between its Time Machine backups and iCloud, CultofMac’s Leander Kahney reports. An Apple source tells him that the company has developed a way to access files from its Time Capsule router and backup device (which is set up on a home network) through iCloud — potentially allowing users to access their files anywhere on iOS and Mac OS X devices (and presumably any computer with a web browser).

Time Capsule will then be positioned as a network attached storage device (NAS) instead of just a simple way to backup files. Kahney says that a new version of Time Capsule, potentially powered with iOS and running Apple’s A4 or A5 chips, could be announced tomorrow as well.

Kahney writes: “This service will also allow you to upload photos and videos from your iPhone or iPad to your Time Capsule. The media will be stored on the device and be made available for other devices to sync. iCloud is the “conduit” through which everything moves, the source said.”

Meanwhile, John Gruber over at Daring Fireball adds a bit of clarity to the relationship between iCloud and Apple’s not-quite-secret cloud music streaming service (which is rumored to cost $25 a year). “Music storage is a feature of iCloud; iCloud is not a music service,” Gruber writes. He later notes, based on “fourth-hand information”, that we should think of iCloud as a replacement to iTunes, instead of just a replacement to Apple’s MobileMe service.

Specifically, Gruber says that iCloud could erase the need to sync your iOS device with iTunes on your computer for media, apps, contacts, calendars, files and more. That certainly would cover some of MobileMe’s territory, and Apple could potentially just give up on MobileMe altogether.