WhatsApp today announced it is rolling out changes to its messaging app to give users more control over how they engage with groups, thereby addressing one of the most pronounced privacy issues on the platform.

The Facebook-owned service said users will now have an option to control who can add them to groups.

Users can choose between Nobody, My Contacts (people whose phone numbers they have saved in their phone), and Everyone — assuming they don’t have any reservations about random people adding them to different groups. 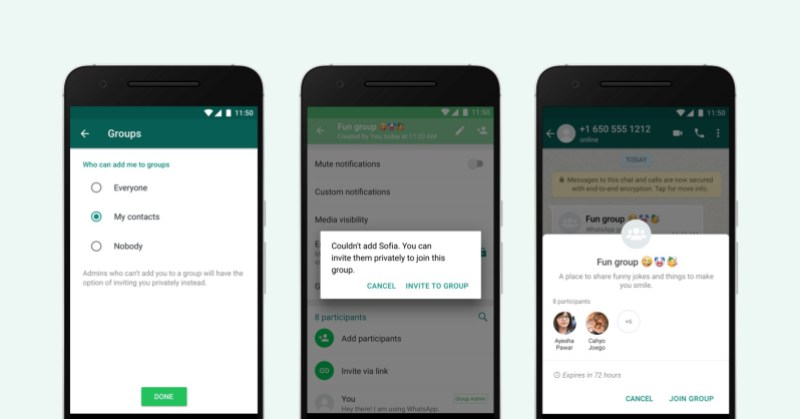 To add someone who has restricted access, users will be required to send a private message to the person with an invite link. That individual can then decide whether they wish to join the group through the invite link, which will be active for 72 hours.

The new feature is available in Settings > Account > Privacy > Groups, WhatsApp said, adding that it is beginning to roll the option out to some users starting today. The feature will roll out to users around the world in the coming weeks, the company added, but they will need the most updated version of WhatsApp to access it.

The rollout of this new option comes as a growing number of users have expressed frustration over the spamming and unwanted messages they have to deal with after people add them to groups without their consent.

Is there a way to stop random people from adding me to WhatsApp groups? The app is unusable to me due to this…

This issue has gained more prominence in recent months, as many nations head to elections and political organizations have been known to add people to as many groups as possible to propagate their messages. At a roundtable in New Delhi in February this year, WhatsApp representatives said they had taken note of the issue and were exploring ways to address it.

“As people turn to groups for important conversations, users have asked for more control over their experience,” the company said in a statement today.

In recent months, the company has rolled out many changes, including enforcing a limit on the number of messages a user can forward on the app, as well as ramping up spam detection tools to weed out fraudulent users.