WhatsApp now allows iPhone users to unlock the app with their face or fingerprint.

The Facebook-owned messaging app was quietly updated over the weekend to version 2.19.20 and, as the update notes state, WhatsApp now includes support for Apple’s Face ID and Touch ID.

To activate the new feature, you’ll need to head to the settings inside the app, then hit “account,” “privacy,” and “screen lock.” There, you can choose to activate Face ID or Touch ID, though of course the available option will depend on your model of iPhone — Touch ID exists on the iPhone 5S through to the iPhone 8 / 8 Plus. Face ID replaced Touch ID from the iPhone X onward.

Once the feature is activated, you can stipulate if you prefer Face ID or Touch ID used immediately or after 1 minute, 15 minutes, or 60 minutes of inactivity. 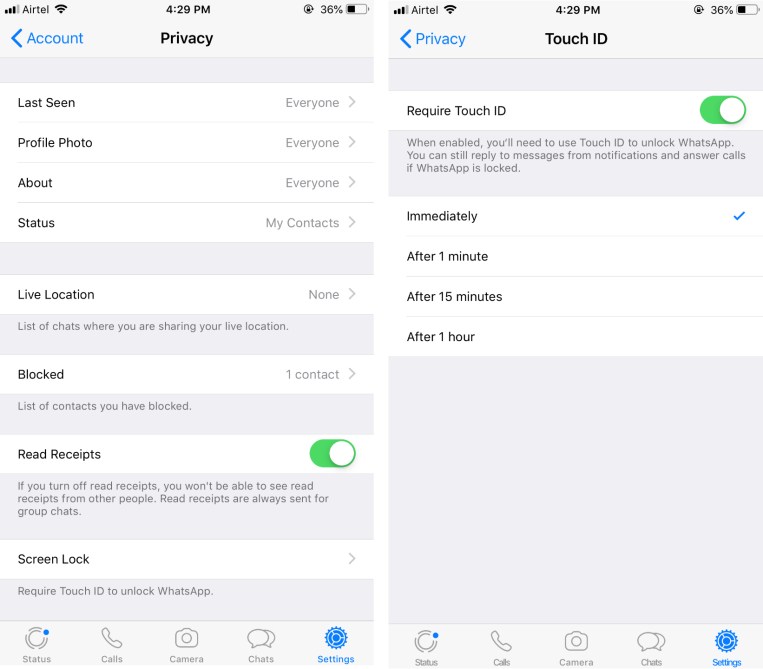 Above: WhatsApp for iPhone

One of WhatsApp’s big selling points is its end-to-end encryption, meaning no prying eyes — including those at WhatsApp itself — can read your messages. This has led to criticism from governments around the world that have been unable to intercept communications from criminals or those under suspicion of criminal activity.

Rather than caving, however, Facebook appears to be doubling down on its encryption efforts — last week, news emerged that the company plans to unite its trio of messaging apps (Messenger, Instagram, and WhatsApp) under a single infrastructure that will include end-to-end encryption by default across all three.

WhatsApp is now Facebook’s most popular app on mobile phones, according to recent App Annie data, and with data privacy rarely out of the headlines, it’s clear Facebook wants to position itself as a privacy- and security-focused company, despite the controversies that have plagued it in recent times. To that end, the company recently hired a trio of privacy experts, one of whom will serve as WhatsApp’s privacy policy manager.

Allowing users to lock down WhatsApp behind a biometric authentication system could certainly help that broader mission, and it seems the company is preparing something similar for its Android app, as evidenced by a beta build that recently emerged.