WhatsApp has introduced a number of updates to its privacy policy and T&Cs today, as the company revealed that it’s set to begin testing ways for businesses to communicate with its users later this year. It will also begin pushing users to share some of their account information with its parent company, Facebook.

Digging into the details reveals some interesting nuggets about what WhatsApp and Facebook are conjuring up. On the plus side, WhatsApp says that by sharing user data with its parent company, it will be able to coordinate certain initiatives better, “fight spam and abuse, and improve experiences across our services and those of Facebook and the Facebook family.”

That sounds great, but it will entail sharing your WhatsApp-verified phone number with Facebook — something that will no doubt garner the chagrin of millions of users. It has been clear for some time that Facebook has wanted its billion-plus users to include their mobile phone number in their profile, but it has so far failed to convince many to do so. Given that a mobile phone number is required to use WhatsApp, the service presents an obvious conduit for Facebook to “join the dots” between its services and give businesses a further avenue to market their wares with targeted ads. 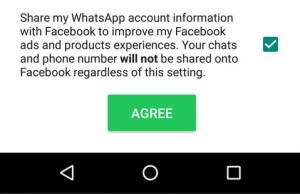 Wisely, Facebook has provided a way to opt out of all this — if it hadn’t done so, it could have faced an exodus from WhatsApp, with users electing to join one of its many rivals, such as Telegram or Viber.

When accepting the terms and conditions in the updated app, you have to click “read,” rather than blindly accepting them. There you will see a control at the bottom of the screen inviting you to “uncheck” the box giving your permission. If you inadvertently agree to the new terms, you’ll have 30 days to change your mind and toggle the settings in your account.

It’s also worth noting here that non-Facebook users can continue using WhatsApp as is, there will be no requirement to set up a Facebook account.

Today’s news comes eight months after WhatsApp founder Jan Koum announced that the app would be ditching its annual $1 subscription fee and would be seeking new ways to monetize through connecting companies with their customers. While no plan had been settled on at the time, the company has given its biggest hint yet as to what this will entail: “whether it’s hearing from your bank about a potentially fraudulent transaction, or getting notified by an airline about a delayed flight, many of us get this information elsewhere, including in text messages and phone calls.” The company added that it would be testing such new features within a few months.

When Facebook acquired WhatsApp for $19 billion more than two years ago, both parties were adamant that advertising would be off-limits within WhatsApp. With this latest update to its T&Cs, WhatsApp is still maintaining that “third-party banner ads” will not be allowed, however it has now made it clear that marketing is in the cards. Its new terms stipulate that businesses will be able to communicate with WhatsApp users for purposes such as “order, transaction, and appointment information, delivery and shipping notifications, product and service updates, and marketing.”  Such marketing may include “an offer for something that might interest you,” according to a FAQ section.

This update represents a notable evolution for WhatsApp as a service, as it continues on its journey from simple mobile messaging app to a billion-user plus platform that not only connects friends with friends but also consumers with companies.

WhatsApp may go on about its “belief in the value of private communications” being “unshakeable,” but many of its users’ biggest fears may soon be realized, as WhatsApp and Facebook get just a little too cozy for comfort. Sure, you can opt out, but the process is rather convoluted, and it will likely be missed by countless users who have grown accustomed to clicking “agree” without reading the terms of an update.