The merits of owning a smartwatch have been argued for some time, but the launch of the Apple Watch last month reinvigorated the debate about what a “connected” device on your wrist should and shouldn’t offer. 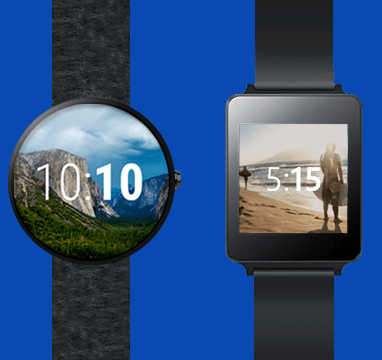 Above: Photos on Android Wear

By way of example, Microsoft rolled out an update to its OneDrive cloud-storage app for Android this week, one that brought support for Android Wear, a version of Google’s mobile operating system built for smartwatches and other wearables.

One of the key features of the update was support for photos, meaning you could view all those happy family snaps or drunken nights out directly from your wrist. This followed on from the previous month, when Microsoft introduced OneDrive support for the Apple Watch, effectively bringing the same support for photos, letting you view and delete images, and even search based on “tags.”

Other photo-centric companies have introduced support for smartwatches too — Instagram was one of the first to cozy up with Apple Watch at launch.

But who really wants to view and organize their photo albums on their wrist? Seriously? Raise your hands. Nope? OK then.

While enabling support for photos by no means obliges anyone to use the feature, the fact that such functionality is included suggests that companies are trying to “will” these connected timepieces into the market with features and functions that many people will likely never want.

Some of the initiatives that emerge from smartwatch manufacturers often feel more like a show of technology — “WOW, look at what we can do” — than a genuine attempt at enriching people’s lives.

As an owner of the original Pebble smartwatch, which arguably kickstarted the recent smartwatch surge with the interest generated from its record-breaking crowdfunding campaign, I can say that smartwatches are genuinely useful contraptions. I can leave my phone on the other side of the house, but still know who’s calling me, what my friends are saying on WhatsApp, and how my local football team is doing. It’s also a great (and much cheaper) alternative to a GPS sports watch, letting me go for a run and see my miles, pace, and time without taking my phone out my pocket.

In other words, it’s great for notifications, alerts, and at-a-glance information. It’s just not a “screen” in the same way that a 5-inch smartphone, 10-inch tablet, or 28-inch laptop is.

But we are just at the beginning of the smartwatch “revolution.” It’s clear that companies are trying to figure out what works and what doesn’t. The general consensus that’s emerging is that any functionality that requires one or two taps to action can work on a watch — this could be paying for goods with Apple Pay, hailing a ride with Uber, or perhaps even navigating to a pre-stored destination on a map.

It can also work well as a media player of sorts. Just yesterday, Spotify announced support for Android Wear, letting you browse and control your music without taking your phone out your pocket. However, I’d argue that some of the functionality here is excessive — I’d perhaps use it to play/pause music or change the volume, but in terms of searching for new music, I think I’d just pull my phone out. On the Apple Watch, you can actually leave your phone at home altogether, as the watch can store playlists directly on it, but who wants to leave home without their phone? Runners, perhaps, but that’s about it.

Ultimately, what’s omitted is just as important as what’s included, and smartwatches could struggle to shake off their “gimmicky” reputation if this premise isn’t attended to. Certainly, efforts from the likes of Will.i.am, who launched a Star Trek-style wearable phone last year, don’t help the cause.

Smartwatches are still in their infancy, relatively speaking, but to truly take off in the mainstream, there needs to be a greater degree of control over the features. At any rate, unless smartwatches become the size of Big Ben, I’m just not sure there will ever be a huge demand to peruse photographs on your wrist.