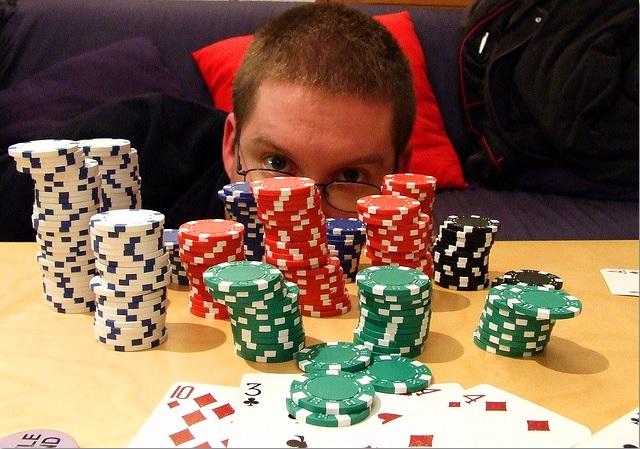 And almost all of it is spent on Apple’s ecosystem.

There’s a reason that even though Android has almost caught up to iOS in downloads, it’s still way behind in monetization. Partially, it’s because iTunes has a long and successful history of commercial transactions, so people feel comfortable clicking and shopping and buying on iOS. Partially, it’s because Apple was the leader in mobile for so long.

But it’s also because advertisers are simply getting fed up with an Android ecosystem that doesn’t convert very well.

“There have been whispers and comments around Google’s Play app store, and some of those concerns were supported when they announced a redesign,” Paul Gelb, head of strategy for MoPub, the world’s largest mobile ad exchange says. “If you have people click on your ad and drive them to the app store and that becomes a breakage point … that will reduce the value of the ad that you want to buy.”

Which is a nice way of saying that ads for app installs aren’t always working, even when the mobile user taps on your ad.

Most advertisers and ad exchange partners don’t want to talk on the record, of course. But off the record, they’ll say that Google Play is just not at the quality level of the iOS app ecosystem. There’s too much crap, too much malware, there’s not the level of quality that iOS has … and there is a missing mass of people on the platform who have confirmed credit card accounts and are, frankly, in the demographic who are willing and able to buy.

That may sound sacrilegious to Android enthusiasts, many of whom are tech-savvy and higher-income, but it’s borne out by the numbers. 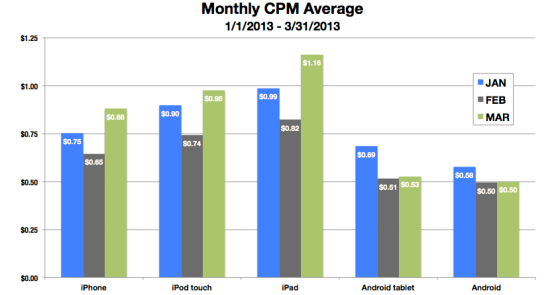 Above: Mobile ad CPMs for the first quarter of 2013

So while tablets are the highest-revenue mobile ad platforms, Android tablets only account for a skinny single percent of all mobile ad sales. 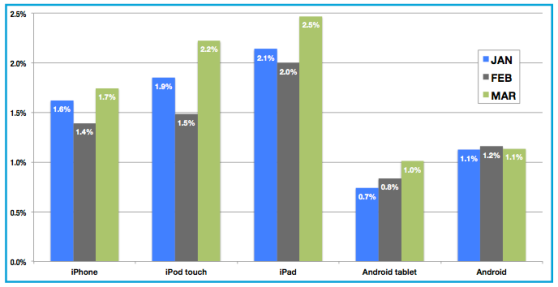 Above: Click-through rates for mobile ads – first quarter of 2013

All of that adds up to an ad-share spend in which iPad almost eclipses the entire Android ecosystem single-handledly, iPod Touch by itself does about a third to a quarter as much as all of Android, and iPhone owns about double the share of all Android smartphones and tablets combined.

Which brings us to the 75 percent iOS ad share:

On a certain level, Android users might not really care — after all, who likes advertising? But advertising is increasingly driving mobile monetization strategies for app developers, who must therefore care. And that means the apps and experiences Android users will eventually get from their platform suffer from the Android monetization gap.

Which doesn’t mean the gap will exist forever. MoPub’s Gelb isolated two key factors that need to change for that gap to disappear:

“I think Android tablets need to hit. It’s incredibly important — the larger screen just offers more ad potential,” he told me. “Also, there needs to be a bit more certainty and success around identifying high-value users who are known to have credit cards and disposable income.”

The question, of course, is when that will happen.