For every basic iPhone 7 it sells for $649, Apple pays about $15 to Qualcomm in royalties for using the mobile chip maker’s patented wireless technology, according to analysts. Apple pays slightly more in royalties for the higher-end $749 and even more on $849 iPhones, based on their higher prices.

According to its lawsuit against Qualcomm last week and from other recent regulatory cases, Apple may even pay the same royalty rates—or more—for iPhones that don’t use Qualcomm chips. After a five-year exclusivity agreement with Qualcomm expired last year, Apple began using competing wireless modem chips from Intel in about half of its newest iPhones. But Qualcomm seeks royalties under the assumption that any wireless modem chip is relying on many of its related patents.

The somewhat convoluted Qualcomm licensing scheme, in practice, used calculations and discounts related to the cost of making the iPhone along with payments to and from Apple manufacturers like Foxconn (see graphic below). They also involved Qualcomm giving back what Apple characterizes as quarterly rebates tied to other contractual restrictions.

Part of why Apple sued now appears to be that Qualcomm started withholding those rebates last fall that add up about $1 billion.

Whatever the case, the royalty arrangement has been incredibly lucrative for Qualcomm. Last year its royalty licensing division reported $6.5 billion of pretax profit on $7.6 billion of revenue. Meanwhile, the company’s chip business itself only made $1.8 billion in pretax profit on $15.4 billion of sales.

Now, with lawsuits filed last week by the Federal Trade Commission and Apple along with a nearly $1 billion fine from the Korea Fair Trade Commission last month, that royalty strategy is under attack. Bernstein Research analyst Stacy Rasgon called it “a direct assault on the basic structure of Qualcomm’s licensing business model.” Though the legal battles are just now topping the headlines, Apple and other large smart phone makers like Samsung appear to have seen an opening to hit the Qualcomm model after China cracked down on the chipmaker’s allegedly monopolistic practices two years ago, imposing a $975 million fine and forcing new negotiations with device makers.

The core of the new attack from Apple and the FTC is aimed at Qualcomm’s practice of charging royalties based on a device’s total value, as opposed to just the value of the mobile chips inside the device. That means whenever a smart phone maker adds more to a phone, whether for additional storage, an improved camera or a new hardware feature, Qualcomm gets a higher royalty.

Qualcomm has also strengthened its bargaining position by seeking royalties from smart phone makers instead of the companies that make the component mobile chipsets that go in phones.

Typically, companies that make other parts inside smart phones unrelated to Qualcomm’s patents, such as graphics chips or audio decoders, license any relevant patents themselves and pay the royalties directly to the patent owners. The cost of the licensing is based on the price of the particular component, not the overall phone price.

By refusing to make deals directly with mobile chipmakers and forcing smartphone makers to engage, Qualcomm gained the ability to impose other conditions, conditions that Apple and regulators say thwarted competition—like Apple’s now expired agreement to use only Qualcomm chips in the iPhone for five years. Qualcomm rejected Intel, Samsung and others when they sought patent licenses directly to cover mobile chipsets they planned to manufacture, the FTC said in its complaint.

And Qualcomm also can make it financially difficult for competing chipmakers to displace its chips, because smart phone makers apparently have to pay patent royalties to Qualcomm regardless of which company makes the chips. That’s the move that the Federal Trade Commission dubbed a “tax” by Qualcomm on all cellphones. 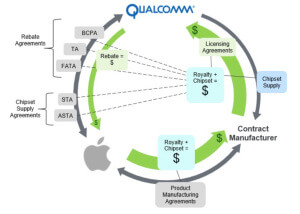 Above: In its lawsuit against Qualcomm, Apple included a diagram of the complex web of payments around the mobile patent royalties it pays. Source: Apple lawsuit

Qualcomm says that its practices have been misrepresented by Apple and others that are merely seeking to pay less for its valuable technology.

“Apple has intentionally mischaracterized our agreements and negotiations, as well as the enormity and value of the technology we have invented, contributed and shared with all mobile device makers through our licensing program,” Qualcomm general counsel Don Rosenberg said in a statement that went on to accuse Apple of instigating regulatory investigations worldwide. And any chipmaker can choose to incorporate Qualcomm’s patented technologies as long as the phone maker who buys the chips has a licensing agreement, the company argues.

The various disputes may come down to how the courts decide to interpret the rules for patents that become part of essential technological standards.

Qualcomm says it has thousands of patents that underlie the basic wireless network standards adopted by mobile carriers, telecom equipment makers, and smartphone manufacturers. As part of the standards process, companies that contribute patented technologies are supposed to agree to license those rights on “fair, reasonable, and non-discriminatory” terms.

Apple and the regulators argue that Qualcomm’s device-level royalties in effect constitute discrimination, because the makers of cheaper smartphones pay far less for access to the same rights as the maker of a high-end device.

But after finding Qualcomm in violation of its antitrust rules, China’s regulators have since allowed the company to go forward with a 3.5% to 5% per device fee, after certain discounts. To the chipmaker, that’s a vindication of the general approach even for patents involved in industry standards. Apple says Qualcomm offered it the Chinese solution but it rejected the deal as still unfair.

Qualcomm’s stock, which had largely weathered the recent regulatory attacks, plummeted 12% on Monday after Rasgon and other analysts highlighted the seriousness of Apple’s lawsuit. Now it will be up to the courts to decide whether the company’s highly profitable–and controversial–licensing model can live on.