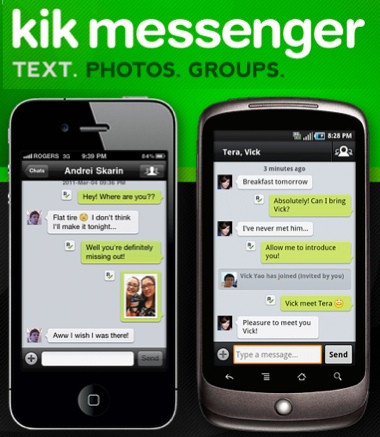 Mobile chat application Kik has just raised $8 million in a first round of venture capital from RRE Ventures, Spark Capital and Union Square Ventures — thanks to its incredibly fast technology.

Union Square Ventures’ Fred Wilson, who joined the company’s board with the investment, said he put money into the company despite there being multiple competitors in the market because, as he put it to me this morning, the “product is fast, so frickin’ fast, way faster than anything [on] the market … if you look at a list of ten things a Web app needs, it starts with speed.”

Kik does have many formidable competitors. They include Beluga, which was just acquired by Facebook; WhatsApp; HighNote; the richly funded GroupMe; and PingChat.

Adding to the stress on Kik, RIM has kicked Kik off the BlackBerry platform, giving Kik a handicap for users who would like to chat with each other across mobile platforms. Meanwhile, RIM has reportedly begun steps to take its BlackBerry Messenger, previously a BlackBerry-only piece of software, to the Android and iPhone platforms, in what seems like a clear counterstrike against this fledgling startup.

Aside from the app’s speed, Wilson said Kik’s team impressed him. Wilson said he has met with most of the management teams of the other applications and had decided that Kik’s team is the one to back. Kik founder Ted Livingston was a strategist at Blackberry Messenger before leaving that company two years ago to found Kik, and is now based in small offices in Waterloo just across the street from RIM.

VentureBeat was the first to write about the company’s launch in October 2010, and we’ve since tracked Kik’s impressive growth.

Indeed, Kik became such a threat to RIM’s own Blackberry Messenger product that RIM subsequently booted Kik off its app platform, initially citing a breach of contractual obligations and later patent infringement. This theoretically gives RIM an edge, especially if it can quickly move BBM onto rival platforms. However, RIM still hasn’t released that support, and it’s still trying to figure out its pricing.

Kik, meantime, is surging ahead without BlackBerry support. In preparation for the SXSW Interactive conference which kicks off later this week in Austin, Texas, Kik today released a new version for iOS, Apple’s iPhone and iPad operating system, and Google-powered Android devices. It features real-time group chat for up to ten people. Kik has also introduced picture sharing– an expected next step. Until now, it had kept things simple with just text.

Wilson said BlackBerry Messenger will remain a powerful product for BlackBerry users, but for people who have moved away from those phones, they’ve done it for a reason — and thus are likely to consider competing apps such as Kik. He said there will likely to be three or four market leaders.

As for Beluga, Wilson suggested Facebook’s acquisition may have killed its chances for a breakout: “All the things Facebook has bought to date  have basically withered and died. I don’t know if Beluga will be any different.”

Kik now has 3.41 million users. It grew quickly by scanning your address book and telling you which friends have already downloaded Kik. Earlier, it was particularly aggressive in this tactic, proposing even people who it thought were similar to folks in your address book, but it has since taken a more conservative approach.