As the release of the Apple Watch draws near, speculation about its pricing has grown louder. We already know the watches will start at $349. But Apple will offer a myriad of bands, sizes, and features, and the price tag of the most expensive version — the “Edition” series, which comes encased in 18-karat rose or yellow gold — is still a mystery. But how high can the price go? And where does the Apple Watch stand on the spectrum of high-end timepieces?

The numbers issuing from the rumor mill and from VentureBeat sources seem to average out at about $5,000. If nothing else, this number should remind people that Apple is straddling the line between consumer technology and luxury with this high-end model.

Are people ready to buy a luxury item — with a luxury price tag — from Apple? Very likely.

Apple will not sell millions of the Edition series watches in the first year, but it doesn’t have to. There’s nothing strange or rare about people spending big bucks on watches. Just as much money is spent on luxury wristwatches each year as is spent on sub-$500 watches.

According to the Federation of the Swiss Watch Industry, only about 2 percent (545,000) of the watches exported by the Swiss in 2014 were made from precious metals, yet those watches generated 38 percent of the revenue. The far less expensive steel watches constituted 55 percent of the units sold (15.7 million), but generated the exact same portion of the revenue — 38 percent. The precious metals and steel watches were in a virtual tie for the top revenue-generating category.

Another way of looking at it is that watches costing $3,000 and up constituted two out of every three dollars spent on watches during 2014. Still another pricing study suggests that 80 percent of the total revenue in the wristwatch industry is generated by watches that cost more than $10,000.

Apple has gone a long way in both materials and design to make the Watch hold its own in the realm of serious luxury wristwatches. Some people think Apple has managed to pull it off. “Apple has paid excruciating attention to detail in the design and wearability of the Apple Watch,” wrote Benjamin Clymer, wristwatch expert and editor of Hodinkee.com. “In many cases, its offerings make what is coming out of Switzerland (or Asia) look amateurish.” 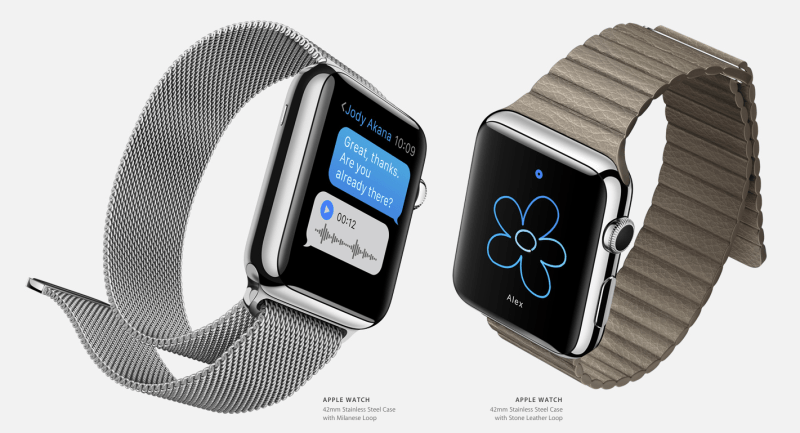 Above: The prices of some of the nicer metal and leather bands available from Apple for the Watch are also still a mystery.

Many initial buyers will be willing to pay for the sheer novelty of Apple’s first foray into the world of, well, jewelry.

“I expect that there will be a lot of wealthy Chinese real estate moguls — the young, the nouveau riche — who will buy these watches right away,” said Sonny Vu, CEO of wearables maker Misfit.

The Edition Watches will help pull other types of buyers into the vortex, too. “Apple’s products have always been aspirational,” Vu points out.

By putting a very high-priced Watch at the top of the line, Apple might entice more people to buy Watches lower down in the price range, Vu suggests. Even if a consumer decides he can’t afford the $5,000 Edition Watch, he may be tempted to buy the $349 low-end Watch that he can afford, he says.

Pascal Koenig of The Smartphone Group in Zurich agrees with Vu that high price points of the Edition Watches could help Apple sell more of the less expensive Watches.

“In general, we believe it is right for Apple to go for various design options and price points,” Koenig says in a note to VentureBeat. “The high-priced watches make the entry-level watches at $350 seem priced attractively.” 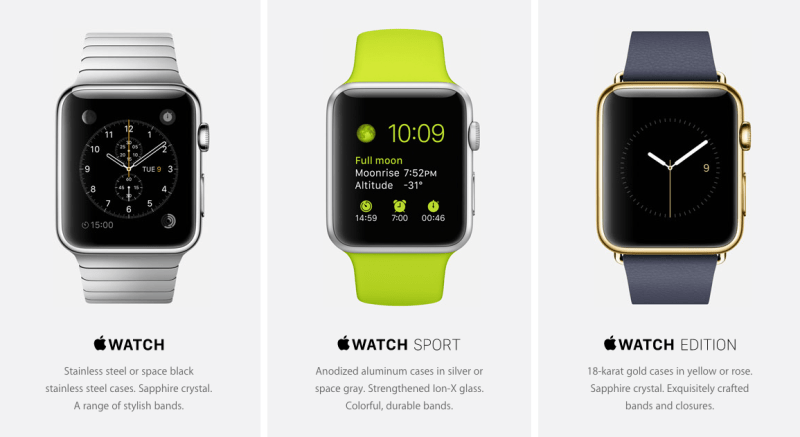 Above: The Watch, Watch Sport, and Watch Edition lines will be available in two sizes with a variety of band styles. While the Watch will start at $349, different combinations of Watches and bands could result in a myriad of price points.

But there’s one thing that is likely to keep Apple from competing in the same league with $20,000 Rolex watches — resale value.

The Edition Watches, let’s remember, aren’t like other luxury watches — they are half computer gizmo and half wristwatch. The outside of the watch may be built like a luxury wristwatch but on the inside it’s all chips and circuits — not metal gears.

In later iterations of the Watch, Apple will rely on firmware upgrades to keep devices already in the wild up to date. But that will go only so far. After a couple of years of ownership the first generation 18-karat gold Apple Watch will be outdated beyond anything a firmware update can fix. The Watch will become thinner. It may incorporate a better battery. It might get a camera.

That’s one of the reasons Koenig’s group believes the Edition-series Watches will be priced between $3,000 and $7,000, but no more. “Based on the fact that the product lifetime of the Apple Watch will be 1 to 3 years, any ‘reasonable’ buyer (and that is what Apple is looking for) would probably not spend more than this,” Koenig says.

And what do you do with your 18-karat gold Apple Watch when it’s become outdated? You probably won’t hand it down to your son or daughter. There’s likely to be $800 to a grand worth of gold in the device. You could melt it down. Maybe Apple will start a Watch buyback program in which it buys the gold back from you and puts it toward a new Watch.

Not a bad idea, really.