Peter Yared is the CTO of CBS Interactive.

Chances are you’ve checked out Instagram, Tinder, Whisper or Snapchat within the last hour. Or maybe the last five minutes. They are some of the most popular and addicting consumer mobile apps today. And they have a remarkably consistent user interface: a big picture with an accompanying line of text.

Research indicates that reading is actually quite difficult for the human brain, which from the start evolved to capture and process mountains of information visually. The narrowing of information delivery instigated by text messaging and Twitter has trained users to communicate efficiently with fewer words. The paucity of text has allowed imagery to take over on the mobile form factor, as evidenced by the most popular new apps.

The attention-focusing layout of a big picture with accompanying line of text originated with the newspaper front page. Above the fold layouts were used for big events such as wars, royal weddings, and big sporting events. Or, in the case of The New York Post, every day. 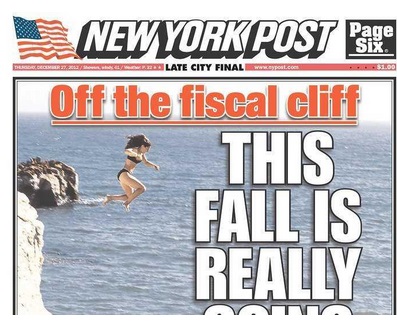 This treatment first emerged on the web with memes such as LOLcat and has subsequently infiltrated every aspect of the Internet.

The picture with accompanying line of text trend has become so pervasive that Whisper, a popular app for anonymously sharing thoughts, automatically suggests somewhat contextually-relevant images for the user to pick from. The thoughts without imagery are actually somewhat hokey. Adding imagery makes them seem somewhat deeper, as Saturday Night Live showcased with its popular Deep Thoughts by Jack Handey interstitials:

Facebook and Twitter are including larger images in newsfeeds to accompany a short line of text, and newer apps like Circle and Jelly are combining the Flipboard-style text overlay on each image in a newsfeed, a look that Facebook and Twitter will likely also soon implement. 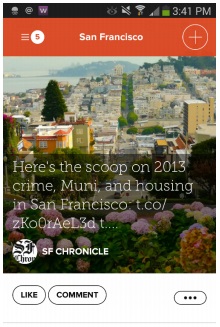 Perhaps in the next phase of this evolution, there won’t even be a line of text at all. As the saying goes, a picture is worth a thousand words.

The only saving grace for the written word in 2014 may be the strong growth of Ev William’s long-form oriented Medium. While short-form communication continues to accelerate, a contra-trend of long-form content may materialize as well.

In our increasingly polarized, bifurcated world, there likely will not be much room for anything in between.