It seemed like a great idea at the time: Future-proof our office barista station by letting people get their coffee delivered by drones flying around the office. (Yes, there was alcohol involved when a copywriter suggested this to our CFO.)

We tried this, ahead of some footage we were filming for New York City’s first ever Drone Film Festival. And we tried other kinds of drones too. Drones were alerting people to new emails. Our head of recruiting interviewed a drone. We tried attaching a doll hand to a drone and getting it to type on a keyboard. This lasted all of a day, a short-lived experiment as we aimed to viscerally experience a taste of the future of the workplace.

Regardless of how widely local and federal laws allow drones to be used in open airspace, businesses will have relatively free rein to use drones indoors. Drones’ arrival even into the most mundane office feels inevitable as our video homage to “The Office” in the video recap implicitly shows.

Do not try this at home. Or the office. Here’s what I learned from letting some drones loose around the workplace:

1) Repeat after me: I am not a drone pilot. Before bringing in the big drones, I tried flying a baby one, a Syma X12 given to me by Randy and Julie Slavin, who run the production shop Yeah Drones and helped my agency with bringing drones in. For every five minutes I spent flying the drone, someone spent ten minutes cleaning up all the pieces of stucco I chipped off the ceiling. Despite being the son of a veteran Air Force flight surgeon, I may be one of the more deficient pilots there is, but few colleagues did much better. Don’t expect to buy a drone and let it loose near any other human being right away. The good news is that by the time drone usage becomes widespread, they will be able to automatically avoid obstacles like nearby drones, people, and the occasional office pet. Alas, the surge in drone pilot career openings will be followed by the complete obsolescence of the profession as drones are automated and easily controlled by anyone with a smartphone.

2) Drones quickly express personalities. Maybe one mistake we made was naming the drones. When Eddie and Shireen are buzzing around the office, they start to take on identities of their own. They reminded me a lot of the worst stereotypes of millennials – getting hired for their first jobs but insisting they can have their run of the place already, and not willing to play politics by deferring to their superiors. Having our Chief Talent Officer Helene De Vries interview a drone may have been a fanciful dose of anthropomorphizing, but as we let drones loose, our creative team did start feeling like the drone was one entity too many taking up space in a meeting.

The experience was reminiscent of my first few weeks spent with Amazon’s voice-controlled speaker, the Echo. Its default setting is to go by the name Alexa, and after talking to it enough, Alexa feels like a member of the family. I’m even having a hard time not calling it “her” here.

3) Drones will make us fatter and lazier. One of the downsides of office life is that there are some tasks that require workers to get out of their chairs. That will not be the case for much longer. In our experiment, drones whirring around the office kept blowing papers all over the place, but soon drones will be reliably ferrying anything and everything around. One drone was alerting our Executive Director of Experience Design Brian Ragan when he had new emails, not unlike when I’ve been in meetings with our CEO Matt Britton and his executive assistant would come by and tap him on the shoulder. The assistant, Brooks Credeur, may not fear that his job will disappear (he is one of the most important people keeping the agency running), but parts of Brooks’s job will go away when drones join the workforce. 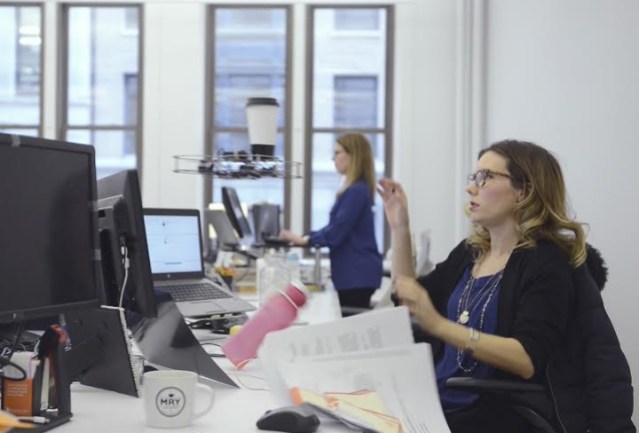 There will be other such applications. Even if local laws prevent your local Chinese food place from replacing the delivery person with a drone, soon your receptionist will send your food via drone instead of making you walk all the way to the front desk. Just try keeping a tally of how many times you get up from your desk; drones will obviate most such needs in the very near future.

4) Drones will be our surrogates. Perhaps you must leave your desk to attend meetings. But how many meetings do you go to where all you need is the gist of what’s going on and the action items coming from it? Have you been in organizations where HR sends memos saying how one should only invite the necessary staff to meetings, and one should only attend meetings that they know require their full attention? HR staff can save their energy, and most of the time, staff can send their drones to meetings, allowing everyone to multitask overtly instead of pretending to take notes on their iPhones. 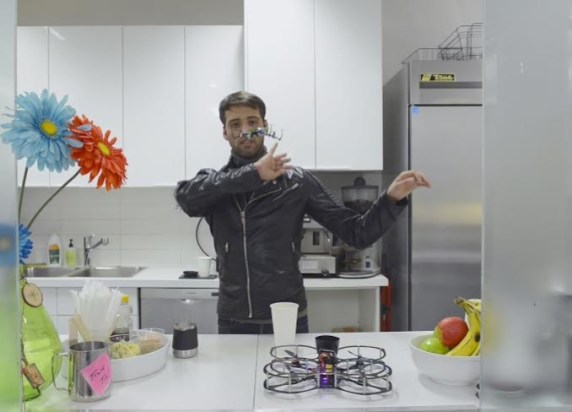 Above: MRY’s barista, Nicholas Ruiz, swats at a drone in his way.

5) Drones will kill office culture. With people barely leaving their desks and putting more and more responsibilities on drones’ metaphorical shoulders, there won’t be any socializing by the water cooler or barista or lobby. Early drone users will first earn colleagues’ enmity but then that will switch to envy. It will quickly seem like the only ones in high spirits at the office are drones.

I’m sure that soon all of this will seem as archaic as that Mad Men episode that illustrated how computers first entered the advertising industry. Undoubtedly people said similar things about telephones, fax machines, and maybe even elevators. There are Luddites in every era.

This much I know: Drones are coming. They will be ubiquity. And they will reshape office life before we even realize how pervasive they are.