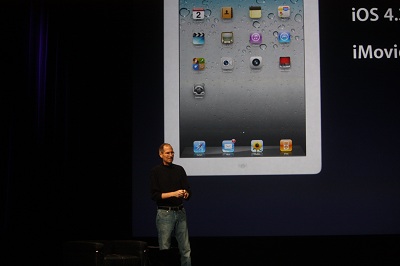 Apple advertises its products as magical. They’re at the intersection of “technology and the liberal arts,” Steve Jobs said today. Something that moves your heart, not just your lust for technology. Will consumers still buy that in 2011? 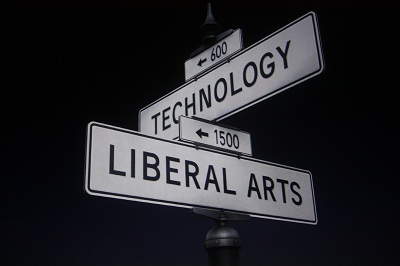 The big picture question of the day is whether Apple has done it again. With the original iPad, Apple crushed its rivals, taking more than 90 percent of the tablet market in 2010 and selling more than 15 million units. Jobs predicted today that 2011 will be the year of the iPad 2. Based on what I have seen today, I think he’s mostly, but not entirely, right. 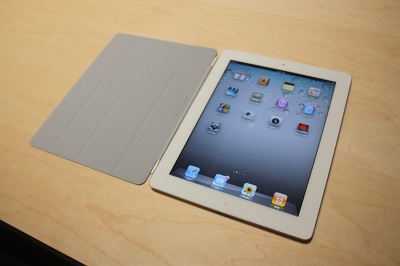 Competitors will discover that Apple has a lot of inherent financial advantages, including being a low-cost leader. That may not sound intuitive, but I believe it has to be true. It is selling so much volume of its products that it can get discounts on parts and manufacturing services that no one else can get.

When it sells its products in stores, it also doesn’t have to give away 20 percent of the margin to a retailer. That is a huge financial advantage. Carriers are also willing to subsidize the costs of Apple products in a way that they won’t with other tablet vendors. All of these things may explain why the Motorola Xoom, a very cool product, is selling for $800 while Apple has priced its new devices at $499 to $829, (and dropped the price of the old iPad to $399). Apple has also left very little room for rivals here, since it has signed up both AT&T and Verizon. Perhaps there is room for rivals to sell $199 machines, but users probably aren’t going to like them.

Those are reasons why any cool Apple mobile product could beat other rivals. But Apple has also done some smart things with the iPad 2. It has created another rev of its microprocessor, the A5, which has two cores, or computing brains. And it has nine times faster graphics than its old A4 chip. Since Apple designs this chip itself, it doesn’t have to give away much margin to a chip design firm. It only has to give a small margin to a chip manufacturer such as Samsung to make the chips.

Apple has also custom-designed the A5 to run Apple applications on a device with a 10-hour battery life. Apple should have an edge there, as it won’t sell the A5 to rivals. But if this is an advantage, it isn’t likely to last long, as Nvidia is being very aggressive with a new quad-core chip that it could sell to any Android rivals.

The design of the iPad 2 is where Apple has more advantages. The iPad 2 will have faster web-browsing with a new version of Safari. It has two cameras that will inspire a lot of video and photo-related apps. The availability of the Mac applications — iMovie, Garage Band, and Photo Booth — on the iPad 2 will make a lot of users happy. More interesting features will come with new releases of the iOS, or Apple’s operating system in the fairly near future.

There are some users who won’t like the restrictions of Apple’s ecosystem. If they want universal serial bus (USB) and SD card ports, they are out of luck. Apple didn’t change the resolution of its screen either, leaving it at 1024 x 768. Competitors could add these options and put emphasis on them as selling points. (Critics are disappointed that Apple did not improve the display, but that’s a big cost issue others have too).

Apple has also made great improvements in the feel of the product. It’s 33 percent thinner, 2 ounces lighter, and it has a wonderful new screen cover that doubles as a stand for the device. (It wakes up the device when you peel it back and it has micro-fibers that clean the screen when the cover is on).

Now here is why Jobs is not entirely right. Apple has come up with a stunning machine at prices that the competitors will have a hard time beating. But it is almost inevitable that Android-based tablets will gain market share on Apple.

So far, I don’t see the Android machine that will beat the iPad 2. But the potential is there, given ingredients such as Android 3.0, Nvidia Tegra 2 chips and other fast microprocessors, and 4G LTE. The latter is the main weakness in Apple’s armor.

LTE is fast, with a minimum speed on Verizon at around 12 megabits a second and actual speeds running much higher than that now. Getting access to 4G LTE is as big a benefit as having access to lots of cool apps, from my point of view. Right now, the timing of the still-young LTE technology means that Apple cannot yet put it into its mass-produced, lowest-cost tablet computers.

If LTE costs come down sometime soon, then Apple can launch a new version of the iPad to incorporate the technology. But it’s not a simple upgrade, as it means that the hardware of the machine — including the radio chip — has to change. And for now, LTE chips are larger than their 3G equivalents, so the heat dissipation and product size are affected. In other words, LTE can force Apple to redesign the iPad.

Apple can do that. But Android tablet makers might be able to move faster than Apple directly into the 4G LTE tablet market. If they do that, then they will have found a scenario where they could steal a march on Apple. Apple is not likely to let that gap last for a long time, but it might be enough for Apple to lose some share this year.

Apple’s leadership position in this market will be hard to beat, but the collective weight and reach of Android rivals could erode it. And here’s a sobering thought: If Apple eventually winds up with only 30 percent of the tablet market, it could still be No. 1, and its place as the largest technology company in the world will not be at risk.

Check out Apple’s overview video on the iPad 2 and Jobs’ comments on technology and the liberal arts below.