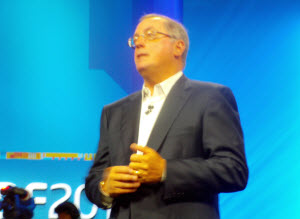 Intel chief executive Paul Otellini said he was not interesting in buying Hewlett-Packard’s PC business, which is either up for sale or will be spun off by HP.

It would be quite an earthquake if Intel was considering such a move, since it might be a way for Intel to push its agenda forward at a faster pace at a time when there are grave threats to the PC. But Intel’s boss isn’t yet considering that.

At the Intel Developer Conference in San Francisco, Otellini said during a press question-and-answer session that he shouldn’t say anything about the HP move, but he would anyway. Stranger things have happened in the technology world lately. Google bought Motorola. Nokia abandoned the Symbian operating system. And Microsoft is courting ARM chip vendors to run the Windows 8 operating system. But Otellini indicated he isn’t a fan of such drastic changes in strategy.

“If it is a spinout as HP has said it prefers, I don’t see anything different in the world,” he said. “As far as us being a candidate, no thanks. We like where we are in the ecosystem. We’re a silicon maker. As for competing with our customers, I don’t see us going there.”

Intel is shifting into the tablet and smartphone chip market, but it will do so with its own internally-designed chips, code-named Medfield, that will debut in the first half of 2012. Google is a key partner as the supplier of the Android operating system, but also as a manufacturer of Motorola phones. Asked why Intel would succeed this time, Otellini said, “We finally got it right.”

Otellini said that phone makers would reveal their deals with Intel in the not-so-distant future when those companies put their phones into testing. The first phones will all be Android-based and will come from multiple manufacturers around the world.

Otellini said that IBM’s spinout of its PC business to Lenovo actually helped that company become more competitive in PCs and that there could be a similar effect with HP’s spinoff.

Otellini said that the MeeGo operating system, which Intel was co-developing with Nokia, is now targeted at the embedded space, such as car computers. He said that Nokia’s change in strategy, away from MeeGo to Microsoft’s Windows Phone 7, took Intel by surprise. Intel is now open to getting more partners on board with MeeGo, and he said that carriers and phone makers still want another alternative open mobile operating system.

Otellini told analysts later that he had learned his lesson in terms of having enough partners. That way, if you lose one, you don’t take as long to recover.