It’s been two months since Foursquare relaunched, and things aren’t looking good. App usage and downloads are down. Way down. But Web traffic is up. Maybe. We’re not sold on that, but it’s what Foursquare tells us.

Foursquare believes it can turn the ship around, but before we dive into how that might happen, here’s the closest look we have at the current state of Foursquare and its risky strategy, according to data collected from comScore, App Annie, Google, and Foursquare itself.

In August, Foursquare’s relaunch reversed a startling downward trend in the App Store charts. But after relaunch hype subsided, interest in Foursquare and its check-in companion app Swarm dropped. Data from comScore that depicts the rise and fall of Foursquare’s unique app visitors makes this trend painfully clear.

The results are similar in the Google Play store, where Google estimates Foursquare has been installed on somewhere between 10 million and 50 million devices.

Swarm follows the same trend on both iOS and Android. Here’s Swarm’s App Store rank history in the U.S., from the app’s May 2014 launch to today. Swarm currently ranks #103 among top social networking apps in the U.S. but is no longer listed among the top 1,500 iOS apps in the U.S.

Above: Swarm’s rank history on iOS

Above: Swarm’s rank history on Android

As Foursquare morphs into a full-blown Yelp competitor, the company warns us that user behavior has changed, too. And Foursquare is no longer just an app company; its mobile Web usage has grown 60 percent year over year, Foursquare tells us. Overall on the Web, Foursquare use “is split 50/50 between mobile and desktop,” Foursquare says.

Unfortunately for us, these claims are difficult to back up independently. Data from Alexa, famously inexact, suggests Foursquare’s search traffic is up but its overall web traffic is down. Google Trends data, however, indicates that queries for Foursquare and Foursquare.com are significantly down from an August 2011 peak.

And this brings us back to our original question: Will the check-in survive? If you want an optimistic interpretation, here’s our best shot: Foursquare has a ton of work to do. 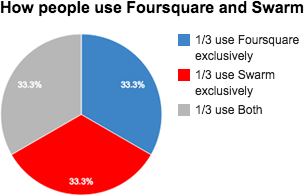 It’s great that usage patterns appear to support Foursquare’s unbundling strategy, but the rest of the data above paints a portrait of declining use and slowing download rates.

Foursquare is apparently up for the task of turning these stats around. A source close to the matter tells us Foursquare has “already started to do paid marketing on Facebook/Twitter” and plans to explore “non-digital marketing/advertising shortly.”

Whether these investments will yield any meaningful, long-term results remains to be seen.