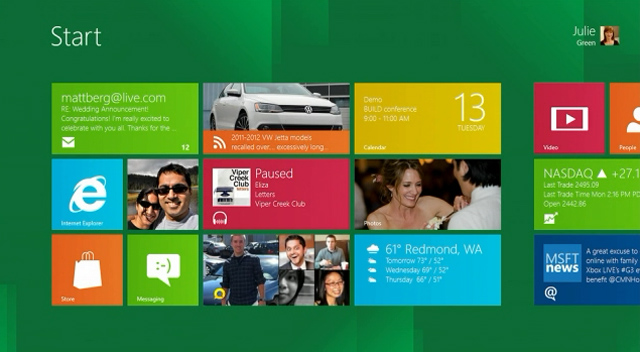 Microsoft on Tuesday showed off more features of its new Windows 8 operating system at the Microsoft BUILD developers conference in Anaheim, Calif.

The OS was first previewed back in early June and is being designed explicitly with the purpose of working on touch devices as well as using traditional PC methods.

“I promise you, the minute you use a touch device with Windows 8, the moment you go back to your laptop or desktop, you’ll have fingerprints all over your screen,” Windows President Stan Sinofsky said while demonstrating. “It’s touch first but equally at home with a mouse and a keyboard.”

Sinofsky boasted that the new OS considerably boosts performance. He showed an older netbook with 1GB of RAM and said it would use even less memory for processes with Windows 8 than Windows 7. The screen below shows that the first Windows 7 release used 540MB of memory while the current build of Windows 8 uses 281MB of memory to run the OS. 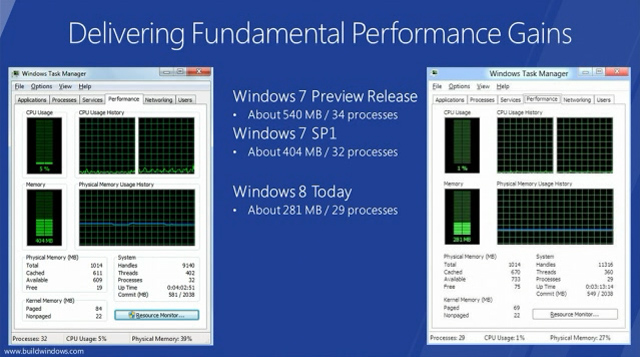 Julie Larson-Green, VP of Windows Experience, showed off the new “Metro style UI” user experience, which is designed explicitly with touch in mind along with stirring animations and typography. It offers touch gestures, “live tiles” and super simple ways to interact with content and apps.

The new Internet Explorer 10 also features a touch-optimized “Metro-style” browser. What sets it apart is that the navigation bar only appears when you ask for it, and it doesn’t have add-ons or plug-ins that can slow performance.

The Windows team also talked a lot about apps. First, the company confirmed that there will be a new “Windows Store” where developers can deploy apps and customers can easily download them, mimicking Apple’s Mac App Store. Programming apps in Windows 8 will be easier, and one on-stage demonstration showed a simple app being programmed using a stunning 58 lines of code. Microsoft said almost all of the Windows 7 32-bit and 64-bit applications would be compatible with Windows 8.

Microsoft said Windows 8 hardware will come in all shapes and sizes. The OS will support ARM-based chipsets, x86 devices, touch and sensors. This means it will work across a wide spectrum of hardware from 10-inch tablets and laptops all the way up to all-in-one PCs with huge high-def screens.

Check out more photos of Windows 8 and its interface below: