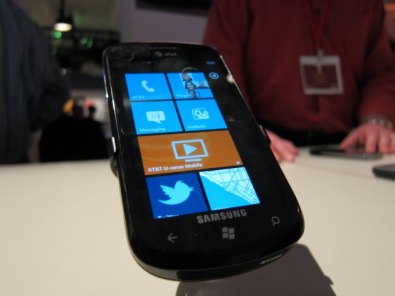 Shedding some light on the mystery of Windows Phone 7 sales, Microsoft today announced that phone manufacturers have sold more than 1.5 million Windows Phone 7 devices to carriers and retailers in the mobile-phone platform’s first six weeks on the market.

The number was revealed in a mock interview with Windows Phone 7 head of marketing Achim Berg. His language is worth paying attention to — Berg was careful to say the number was based on units shipped by manufacturers, meaning it doesn’t represent actual activations by consumers. Still, it’s more information than we’ve had previously, and it’s enough to tell us that WP7 hasn’t been a complete flop.

Windows Phone 7 launched in the US on November 8, and in Europe several weeks earlier on October 21. VentureBeat’s Dean Takahashi reviewed a few Windows Phone 7 devices and concluded that the platform, while late to the party, is good enough to win over some iPhone users. In my own testing, I’ve found the platform to be surprisingly robust, and it’s clear that Microsoft is off to a stronger start than Android was two years ago.

We still don’t have first-day sales for WP7, but I’m sticking to my guns that those numbers don’t really matter — Microsoft is prepared to dump as much money into the platform as necessary to put it on the mobile map.

Berg also mentioned that WP7 just recently hit a milestone of 4,000 available apps, and that it currently has over 18,000 developers working on developing apps for the platform. That’s impressive growth, as it took Android around 5 months to reach that same number of apps, research firm IDC points out. It’s widely known that Microsoft pumped a significant amount of money into courting developers and that it has worked closely with many developers to ensure that their apps are as close to perfect as possible.