Withings, makers of a popular series of health and fitness gadgets, unveiled a new sleep-tracking gadget called the Withings Aura.

The company made its announcement at International CES 2014, one of the largest technology showcases in the world, in Las Vegas.

Sleep-tracking is one of the hottest areas of personal health tracking to emerge in the past few years. That’s perhaps because Americans are so chronically sleep-deprived. It might also be because sleep is one of the areas of life where we have little insight into what we’re doing, because we’re unconscious while we’re doing it — so it’s an area where a gadget can add a lot of information that we don’t otherwise have access to. The Jawbone Up and Fitbit One wristbands both track sleep movements as well as your daily activity, and apps like Sleep Cycle help monitor your sleep quality by tracking how much you move. 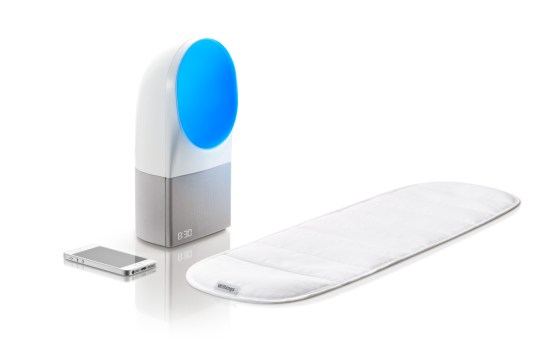 Above: The Withings Aura has two parts, and works with a smartphone.

The Withings Aura has two parts: a pad that slides under your mattress to monitor your body movements, breathing, and heart rate; and a bedside unit that tracks the noise, light, and temperature in your room. The bedside unit also can provide light, to wake you gently with its dimmable LEDs, and sound, to help soothe you to sleep or wake you up.

You’ll control both devices and view the data they collect using a Withings Aura app on your smartphone. Withings was vague about what platforms it would support, but it’s probably going to be available for iOS initially, and Android at some point later, if the company’s other products are any indication.

Withings said that the Aura would be available this Spring, for $299.