Withings today completes its tantalizing return from the tech scrapheap with the launch of its first new product as an independent company.

The French firm, which was founded by Éric Carreel and Cedric Hutchings in 2008, was bought by Nokia in 2016 for $192 million. Nokia later ditched the Withings brand in favor of Nokia Health, before revealing that it was considering selling or closing its digital health business in February as part of its shift away from consumer products. Carreel then stepped up to the table to buy the company back from Nokia, a deal that was finalized at the end of May.

Today, Withings unveiled the Steel HR Sport watch, which continues with the same “Steel” branding the company has used on previous fitness-focused wearables. While the Steel HR Sport features an analog interface and built-in heart-rate monitor similar to its predecessor, for the first time ever in a Withings or Nokia Health wearable, it will also now ship with “connected GPS” as well — this isn’t nearly as good as built-in GPS, as it means that you will still need your smartphone with you if you want any location-based features.

The watchface has two separate displays — a circular digital screen can show heart-rate, steps, calories, distance traveled, and more, with the user able to change the displayed metric by tapping a button. Additionally, the OLED display can also tell you when your phone has received notifications such as a WhatsApp message, with the watch also issuing a little vibration on your wrist.

Within the accompanying Withings Health Mate app, available for Android and iOS, users can also set themselves daily activity targets such as number of steps — a little analog sub-dial on the watch displays how far toward your daily activity goal you currently are, as a percentage.

The stainless steel casing promises water resistance up to 50 meters (5ATM), and it ships in black and white-faced versions. In terms of battery life, which is always a key consideration with any connected contraption, the Withings Steel HR Sport promises “up to” 25 days under normal usage, which it defines as when you’re using it for the time and activity-tracking only. In workout mode, the company promises up to five days.

Another interesting addition worth noting is that this is the first Withings product to offer a fitness level assessment through measuring your VO2 max, which basically establishes how well your body leverages oxygen when you’re putting your body through its paces. It probably won’t be as accurate as that garnered from a proper laboratory test, but it should represent a fairly good estimation. 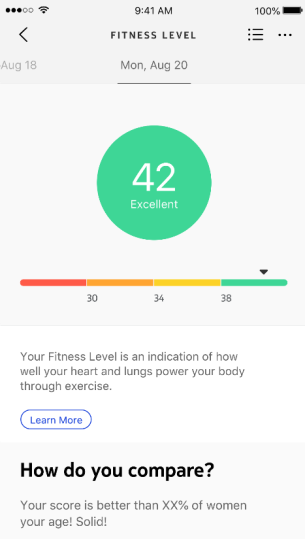 The watch likely won’t appeal to pure fitness fanatics, though, as the Steel HR Sport doesn’t display metrics such as real-time speed, a key feature offered by other fitness watches from the likes of Garmin. And, as noted, it doesn’t have built-in GPS. Plus, the digital display that shows the key numbers seems to be rather small. But with its slick analog design, the watch could appeal to a much larger market — this is a watch, first and foremost.

“With its advanced sport and health tracking capabilities, Steel HR Sport is a perfect example of how Withings is delivering against its original mission to help better manage health,” said Carreel, who also serves as Withings’ new CEO.

It’s been a whirlwind couple of years for Withings, which has sold everything from watches, fitness bands, and sleep-trackers to thermometers and scales. Today represents a rebirth for Withings, as the new Withings online store will once again sell all those products it previously did, replete with a brand new logo that also launched today.

Withings is still headquartered in Paris, with additional offices in Boston and Hong Kong, and it currently counts more than 200 employees globally.

Crucially, its relaunch comes as the global wearables market appears to be in rude health — it recently recorded a 5.5 percent year-on-year-growth, though IDC forecasts a slower-than-usual single-digit growth in 2018 before the numbers begin to ramp up in 2019 and beyond. Indeed, IDC anticipates that smartwatches will represent half the entire wearables market by 2022.

With the likes of Apple, Xiaomi, and Fitbit leading the wearables space, Withings has some way to go before it is fully back in the public’s consciousness. In many ways, it will be making up for lost time after withering away at Nokia for the past two years, but Withings was a popular brand back in the day, and it was one of the first modern companies to embrace the smart home and the quantified self when it launched its connected scales back in 2009.

“The public reaction to the return of Withings is extraordinary and renews my belief that elegantly designed devices with health tracking abilities can dramatically improve individual and society’s health,” Carreel added.

A big difference this time around, however, is that Carreel won’t have his cofounder sidekick Hutchings on-hand — Hutchings is already working on other projects and is unavailable to help resurrect Withings 2.0.

Priced at $199.95, the Steel HR Sport smartwatch is available to buy today through Withings.com and the usual third-party retailers, including Amazon.