An analytics startup called Mixpanel has been tracking iOS 7 adoption and usage, in comparison to iOS 6. Apple fans have remained loyal to iOS6, but an increasing number are giving the newer operating system a shot.

Mixpanel’s chief executive Suhail Doshi just alerted us to the fact that iOS 7 just eclipsed iOS 6 for the first time. 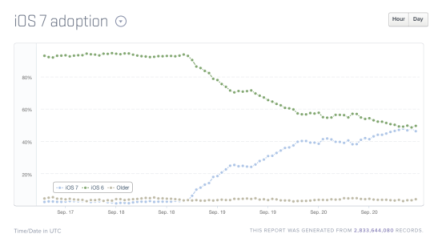 Mixpanel is tracking global mobile usage — Doshi said the data is based on 2.8 billion actions of people using thousands of mobile applications.

It’s also worth noting that there are discrepancies in different markets. In China, for instance, the new operating system has struggled to take off. But adoption has been far quicker in the United States.

The new operating system appears to have inspired a bit of a love/hate response from consumers and the press. It’s the largest visual overhaul since Apple first introduced the iPhone in 2007. The updates include a personable male voice from Siri, icon tweaking and polishing, and a new built-in flashlight.

“It looks like Apple proved its design won over its customers,” he said. “That’s surprising given how drastic it was.”

Have you switched over to the new operating system? Let us know your thoughts in the comment section below.