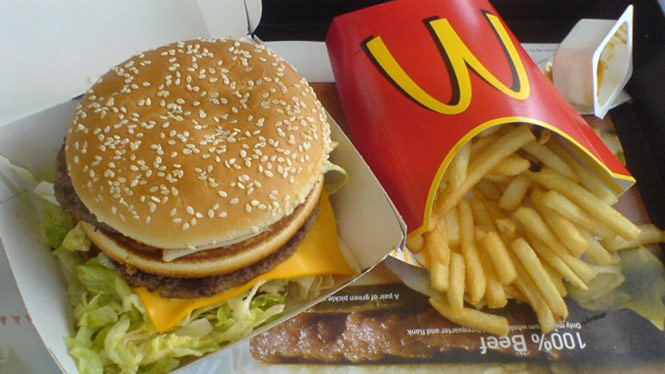 A McDonald’s restaurant in Hampton Roads, Virginia, is trying a novel approach to customer satisfaction.

Owner Hugh Fard has installed iPads for his customers to check Facebook, news, and search the web while they down Big Macs, fries, and cheeseburgers, according to the Virginian Pilot.

Customers won’t be able to check YouTube, however, as Fard has limited access to sites that he considers actually or potentially pornographic. That’ll probably help with his monthly bandwidth bill as well.

It’s an open question, really as to whether this will be useful enough to stay. Corporate officers from McDonald’s say they’re watching what happens before they make any decisions on future expansion of the program. One question is cleanliness: Do you really want to eat while touching a screen that dozens of others have also been touching?

Last I checked, burgers don’t come with knives and forks.

The other key question, of course, is how many would need or want such a service. Smartphone penetration in the U.S. passed 50 percent earlier this year, and most, I think, would prefer to use their own device to surf, tweet, and read while eating. Of course, the iPads may particularly appeal to kids, low earners, and the elderly, all of whom have low smartphone and tablet ownership rates.

The online community seems to agree, with one commenter calling the tablet a “communal germ pad to play with while you’re eating.”

One thing seems certain: Someone is going to forget to log out of Facebook after finishing their meal. And then the fries are really going to hit the fan.