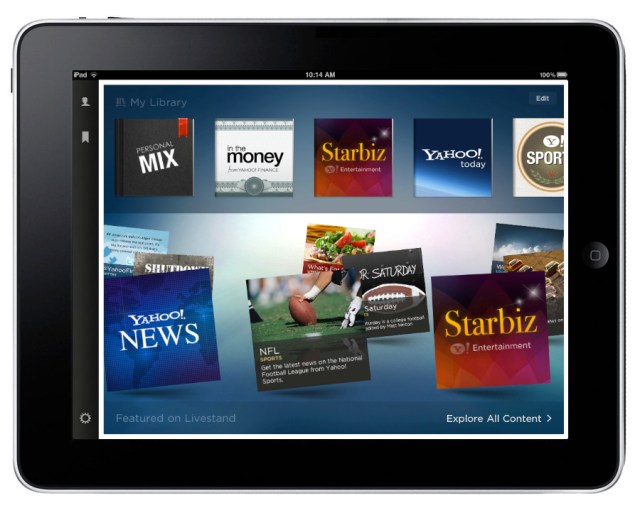 The visually-driven app is designed to be interactive, rich media-centric, personal and social. It appears to be a hybrid social news reading application and digital newsstand — a cross between the Flipboard app and Apple’s Newsstand, if you will.

Livestand already features more than 100 different titles from third-party publishers, along with content from Yahoo’s News, Finance and Sports news channels. Yahoo is referring to Livestand as a personal digital newsstand and a living magazine.

Yahoo will face some stiff competition from a host of other magazine newsstands aimed at capitalizing on tablet customers’ increasing appetite for the printed word. Flipboard was the first of these, but it has been quickly followed by Zite (acquired by CNN for a reported $20 million in August, 2011), Editions by AOL, Amazon’s Kindle Fire newsstand, and more. Google previously tried to buy Flipboard, which was valued at more than $200 million in April, but the company remains independent. Meanwhile, Google is working on its own newsstand/reader app, called Propellor.

The Livestand experience is structured around the user’s content library, and includes a store where they can browse and subscribe to any of the publications featured in Yahoo’s content directory. Publications are spread across categories such as news and politics, arts and culture, technology and entertainment.

Yahoo first announced Livestand in February of this year. The application was released in the App Store in the U.S Wednesday, and will be rolled out to international markets in 2012.  The free app requires iOS 4.3 or later.