When Marissa Mayer announced in 2015 that  “MaVeNS,” (mobile, video, native advertising) would be a major focus for Yahoo’s growth effort, a significant component of that vision involved video. And Mayer has followed through on that commitment over the past several years, but with decidedly mixed results. Today Yahoo is announcing Yahoo View, a new effort to promote video on the site, this time powered by an extension of Yahoo’s partnership with Hulu. Currently desktop-only, the app lets you watch shows and series from Hulu, while also providing a Tumblr-powered community viewing experience that includes photos and GIFs.

Yahoo and Hulu have had a long-standing relationship that dates as far back as 2006, when Yahoo became one of the initial distribution partners for the streaming media and video service. At the time, Hulu’s shows and clips were shared directly on Yahoo’s website, but now they’re going to available through a standalone app. 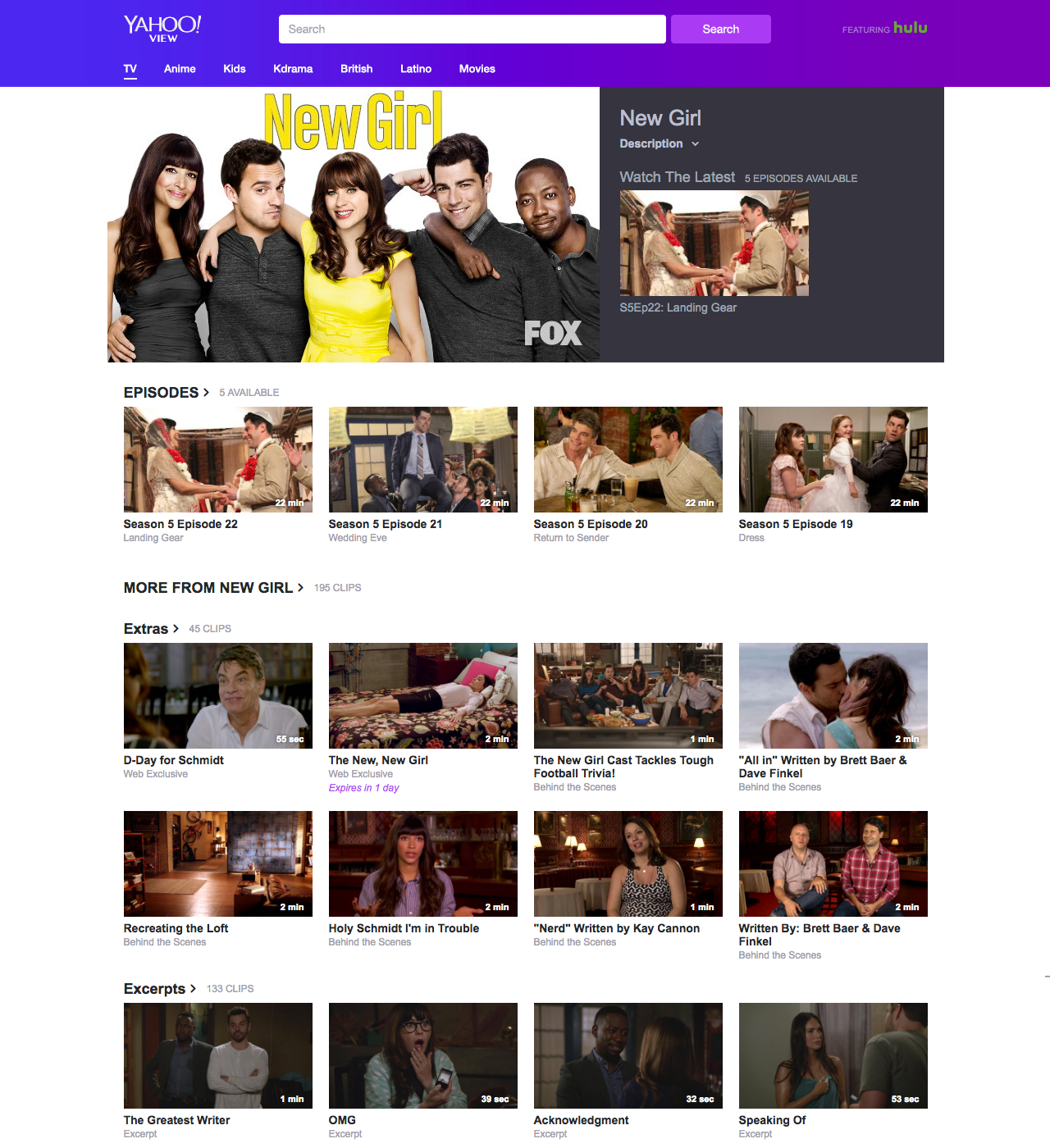 “This was a natural extension of Yahoo’s video strategy and an opportunity to marry Hulu’s free premium content and current programming with our highly engaged audience of entertainment fans,” said Yahoo’s vice president and head of media partnerships, Phil Lynch.

Of course, users will be able to watch shows from Hulu’s free TV catalog, but to make Yahoo View more entertaining, the app also includes features and tools designed to keep viewers engaged with the show. These will encourage viewers to search for information about plot twists, characters, and actors, and will further Yahoo’s goal of creating a place to discuss the latest episode from the last five episodes from your favorite ABC, NBC, FOX, and other network sitcoms, streaming 8 days after its original broadcast. Above: Yahoo View not only lets you watch shows from Hulu, but provides fan elements from Tumblr, such as GIFs.

Jess Lee, vice president of Yahoo’s lifestyles product, shared that — as with Hulu’s free experience — “you can search, browse by genre, and watch shows for free, with commercials. While watching, you can also browse through extras, behind-the-scenes, GIFs, and edits from Tumblr, and the video will dock to the top of the screen while you scroll.”

Lee declined to comment on whether there would be any restrictions in accessible content, deferring such questions to Hulu. However, she did say that the app would include the series “Saturday Night Live” and “Community,” two shows that Yahoo has had licensing deals with in the past, but which wound up being expensive write-offs. 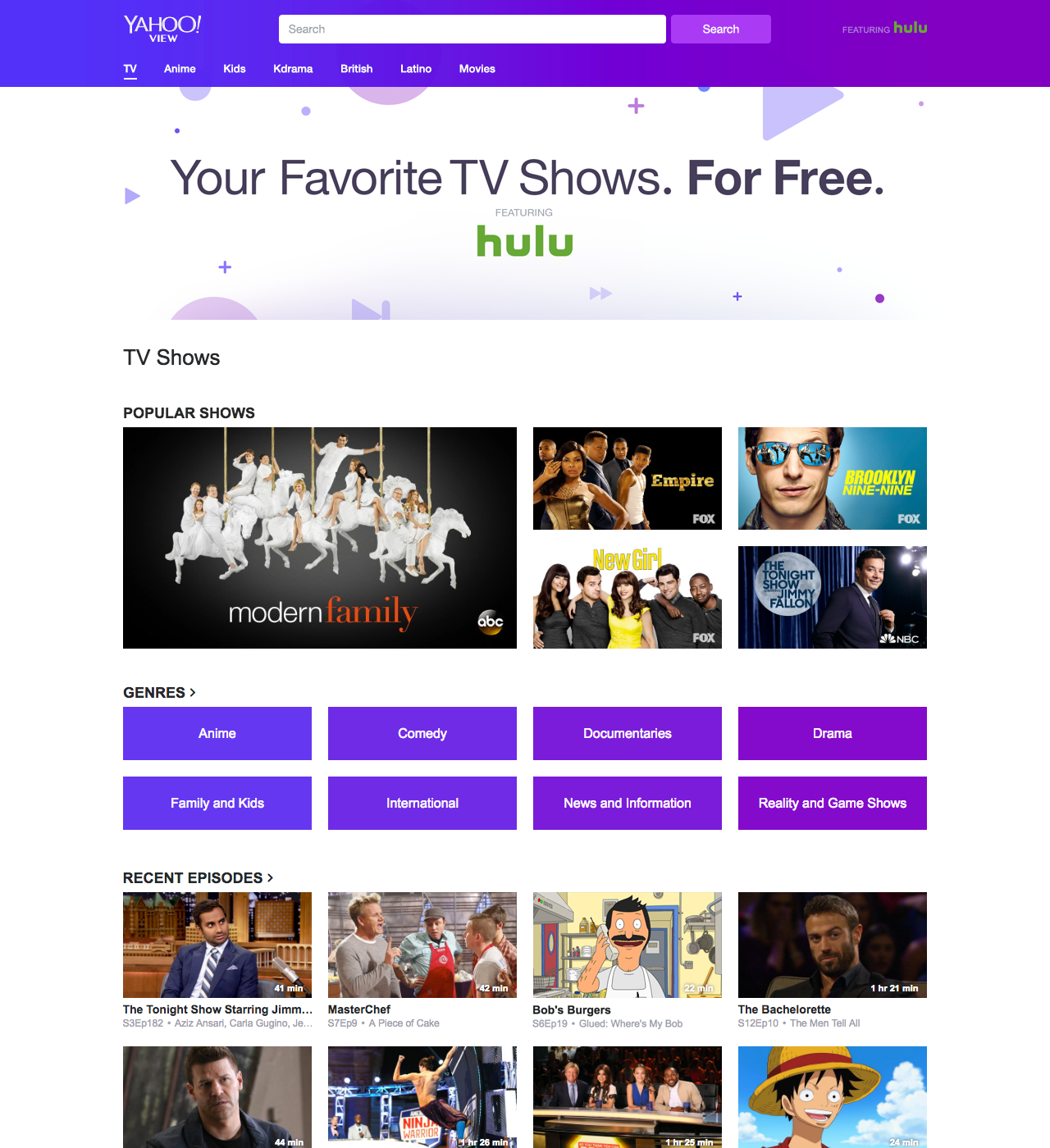 Above: Yahoo View lets you search by genre and any shows on Hulu.

“Yahoo View is our first step toward creating a powerful community TV-watching experience, but it’s really only the beginning,” Lee added.

The launch of this app comes seven months after Yahoo shuttered its premium video hub, Yahoo Screen. The goal of that program was to rival YouTube and become a centralized hub for the original series and films the company wanted to produce. During its two years of existence, it served to organize all of the disparate video content on Yahoo’s network into one app. Yahoo View doesn’t seem to be a replacement for Yahoo Screen, or at least, the company is avoiding any comparisons.

Today’s launch comes as Hulu has decided to no longer support free TV on its platform. The Hollywood Reporter said that Hulu’s offering didn’t receive a lot of traffic largely because of lack of promotion. Ben Smith, senior vice president and head of experience at the media company told the publication: “For the past couple years, we’ve been focused on building a subscription service that provides the deepest, most personalized content experience possible to our viewers. As we have continued to enhance that offering with new originals, exclusive acquisitions, and movies, the free service became very limited and no longer aligned with the Hulu experience or content strategy.”

Interestingly, as the Yahoo-Hulu partnership deepens, one wonders whether there was any truth to reports that Yahoo was in the market to buy Hulu for $600 – $800 million in 2013. Naturally, the company declined to comment.

Yahoo View is available today for those in the U.S., but only on the desktop. Mobile web and app support will be coming soon.

Updated as of 8:20 a.m. Pacific on Monday: Added more information about Hulu’s decision to shutter its free TV service.