With every passing year, the tech industry is flattered with a new slew of statistics revealing truly remarkable growth. 90 billion mobile app downloads across Android and iOS in 2016, with a whopping 40 percent increase to revenue generated for developers. But something’s not quite right here: If you were to sit your business partner down and talk about how your great idea for an app would be able to capitalize on just a fraction of this market and make you multi-millionaires, you’d be plain old naive. Forget being multi-millionaires — how about just being able to make a comfortable living? Still a bit naive.

By 2015, 60 percent of app developers were earning under the poverty line, making profits of less than $500 per month. Older statistics indicate that 80 percent of developers don’t earn enough to turn their development into viable businesses. But things are improving; more money is being paid out, so surely developers are being paid more, right? Well, as it stands, Apple’s App Store and Google’s Play Store are horribly stacked in favor of the largest players in the market, and the current trend would seem to indicate that this divide will only grow, despite the fact that barriers to entry to the market are apparently falling. After all, with a mere $124 you can get access to both the Apple and Google app stores — and with that, access to tens (soon to be hundreds) of billions of app downloads.

The truth is, these barriers are simply shifting elsewhere, and worse yet, growing as competition rises to fight for as large a portion of the app market as possible.

And therein lies the single, largest barrier for you as an app developer: the reality that you’re going to require an exhorbitant amount of capital to get your app seen by anyone.

Remember those corny Game of War ads featuring Kate Upton? That game was earning the developer, Machine Zone, an estimated $1 million per day. The catch? That campaign alone cost a staggering $40 million.

App store discoverability is at its lowest, and this is fooling countless app developers and entrepreneurs. As John Dinsmore, mobile app market researcher at Wright State University, explained, many part-time app developers out there simply don’t have the marketing budget to compete, but they trust in what they believe to be a meritocratic marketplace. That is, if your app is good quality and doing something people want, it’ll attain a healthy amount of natural growth and will eventually become a top app. Disappointingly, this simply isn’t the case. As it stands, app stores have three primary pathways of exposure:

Now, let’s go back to supposing you and your business partner eventually release your app. You’ve had six months of hard graft, fiddling, fixing, and restarting, and you’ve sunk in so much of your spare time and savings that you’re wary of spending more on things like marketing, knowing full well that you can’t really compete with the big bucks. You identify the above three routes for attaining users and consider which of them may work for you. Straight off the bat, you can eliminate the top charts. They’re completely dominated by the largest apps with the largest paid media campaigns on the App Store. So your only hope is to go viral, which, unfortunately, means you’re unlikely to ever find yourselves in the Top 50. As Dinsmore so aptly put it, “A programmer would have a better chance of making an NBA roster than having an app go viral on its own.”

App store changes are making it even harder to get featured

So do curated lists and being featured work in your favor? Potentially, though you shouldn’t count on it. Often you have to have a person on the inside (i.e. an employee at Google or Apple). If you do, that’s great. But what if you don’t? Sami Rehman, cofounder of My Film Buzz, realized soon after launch that his app had fallen under the radar and tried to turn things around by spending his time researching and getting in touch with App Store managers in the hope his app would get featured. Despite great exposure from a presentation at Google Campus, a stand at London TechCrunch, and spots at the London Film Festival and Comic Con, it didn’t work out. Unfortunately, this kind of story seems likely to become more common, particularly when considering the proposed changes to the iOS App Store. Take a look at the screens of the new app store (below), and see just how few apps are to be displayed to potential customers at any one time. Two at best. 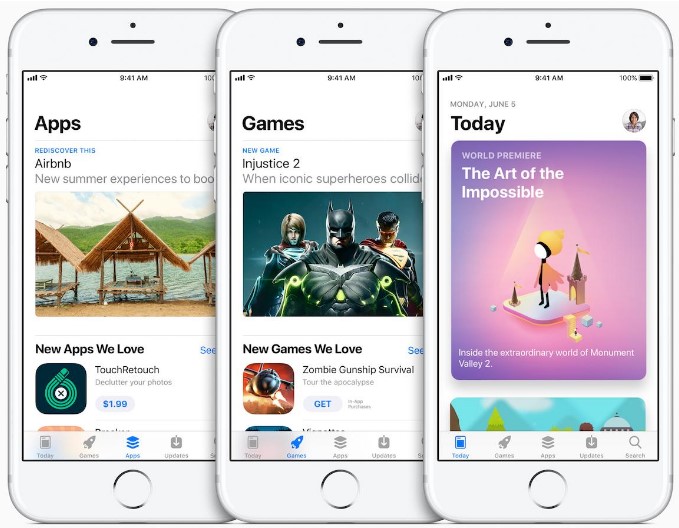 If only a handful of apps were cherry picked to be featured before, even fewer are going to be now. And sadly, this makes sense for Apple to do, as the average user spends 42 percent of their time on a single app, and 60 percent of users are happy to spend their time on just a couple of apps. So, of course, store managers are going focus on a very select few, outstanding apps. As a result, we’ll see a scrolling list of handpicked apps in a very limited one-app-at-a-time format. The chances of getting featured are slim.

Like most developers, Rehman and his partner found themselves trying to gain exposure through the final route, search. App Store Optimisation (ASO) is the fine art of honing in on your keywords, titles, and descriptions to stay above your competitors in search results. While Rehman has only recently shifted his evenings and weekends to ASO, David Nicholson, creator of Ultimate Driving Mode, has been struggling from day one to recreate the success of previous apps using ASO to help drive downloads. Among a plethora of failed paid and earned marketing strategies, Nicholson fought to get his ranking for Amazon Alexa searches past the 30th search rank — which generates minimal downloads — but as of yet has struggled to get exposure or make a positive return on investment from other marketing strategies.

Still, it isn’t all doom and gloom. Judith Nowlin, CEO of iBirth App, through years of consistent optimization of keywords and metadata, along with regular updates and high amounts of earned media, was remarkably able to achieve the top spot for Pregnancy Nutrition and the top 10 for Baby Trackers. This isn’t to say Nowlin doesn’t still experience ups and downs. Every now and then a change to the mechanics of the app store or a change to their ASO will knock iBirth App down a few places, but in general Nowlin and her colleagues have earned good, sustainable levels of exposure.

It takes a huge time investment to get earned media

So what’s the difference between the experiences of those developers who successfully pulled off higher search rankings and those who didn’t? In the absence of paid media and with a lack of brand awareness to capitalize on owned media, developers have to dedicate their time in large amounts to earned media. As Dinsmore put it, in the absence of a meritocratic market, earned media becomes a full-time job. Does this mean the only way developers can earn suitable levels of income is if they quit their day job? Is the dream of creating a software business from your weekends and evenings dead? Probably. But even if not, there are still plenty of battles to fight. Search results are gradually slipping into the realm of sponsorship and paid rankings, thus slowly strangling the last sustainable route to exposure for non-financed, low-budget developers.

This is the reality of the mobile app economy.

Michael Daniel is a software developer in the South West of the UK. He recently launched Crowdsourcer.io, a crowdsourcing alternative for programmers.