By and large, YouTube has traditionally required an internet connection to access videos, but because not all markets have ubiquitous mobile internet, Google has thrown some markets a bone by allowing offline access. Ad dollars are ad dollars at the end of the day, whether offline or online.

The Google-owned video-streaming giant first introduced offline mode for India, Indonesia, and the Philippines back in 2014 and later expanded it to cover more markets, including the Middle East.

In India, a number of mobile operators offer promotions and discounted data during off-peak hours — when bandwidth is at less of a premium. So now, when an Android user in India taps the button to push a video offline, they’ll be asked if they want to “Save Overnight.” If they agree, the YouTube app will schedule the video to be pushed offline during the off-peak nighttime hours when the user is asleep. It’s worth stressing here that this will only work when connected to a compatible mobile network — it won’t work over Wi-Fi.

This feature won’t be available to everyone in India yet, for now it will only be available to Airtel and Telenor subscribers, but YouTube say it hopes to introduce the feature nationwide “eventually.” 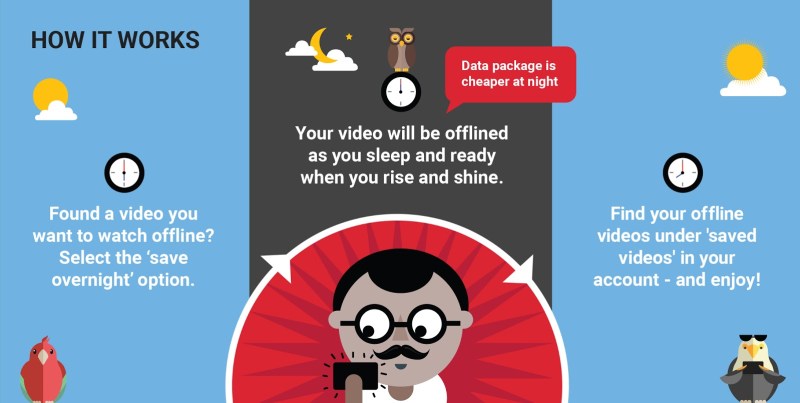 It’s worth noting here that Google’s monthly YouTube Red subscription also provides offline access to videos, but that’s only available in the U.S., Australia, and New Zealand for now and, well, it costs $10 per month.

India is emerging as a key battleground for internet companies — a country with a population of 1.3 billion people certainly presents opportunities. But the fact that most of those people still aren’t online is an obstacle. Google is in the process of introducing free public Wi-Fi at train stations across India, alongside its various offline initiatives. With offline access to maps and Google’s first dedicated public transit app, replete with offline access, the company is ensuring its services remain front and center with the burgeoning smartphone-toting population.