YouTube announced that it is adding the capability to broadcast live video right from its mobile app. This capability is said to be rolling out to select creators first, but it is expected to become available to more people later on.

On stage at VidCon, YouTube product lead Kurt Wilms revealed the latest feature to come to the popular video social network. Although YouTube has had livestreaming capabilities before, it was limited to those with verified channels and was done through the Creator Studio.

Today’s news confirms our report of a more accessible livestreaming tool for people and the company says that it will be “baked right into the core YouTube mobile app.” This also puts the service into direct competition with Twitter’s Periscope and Facebook’s Live video, both services that have recently been in the news and have seen some pretty sizable adoption.

Since it’s built right into the YouTube mobile app, there won’t be a steep learning curve. You just tap on a big red button on the lower right-hand side of the screen, take a selfie for the video thumbnail, and then proceed to broadcast. Viewers will be able to find all of your videos right on your YouTube channel, and the service lets you search, review recommendations, and protect videos from unauthorized usage.

The interface lets you notify your subscribers when you’re broadcasting, and you can enable chat and even specify whether you want the livestream to be viewable by the public or not. 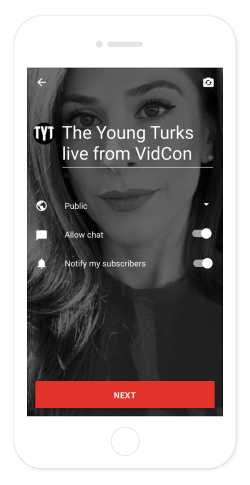 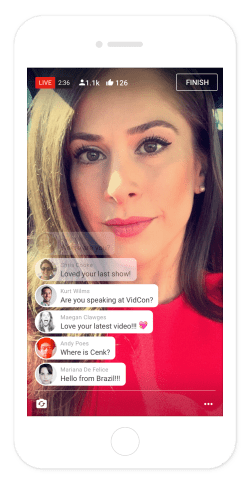 As the battle for video wages on amongst the likes of Twitter, Facebook, Snapchat, and YouTube, it’s now all about this new form of “reality” TV — people broadcasting what they’re doing (think what iJustine does, but more for the masses). And it’s not surprising that YouTube has entered this space. In August, the company’s head of consumer products, Manual Bronstein, told Wired: “Broadly speaking, we think about YouTube being synonymous with video…live has always been a part of video, and it’s actually always a very exciting part.”

One potential differentiator that YouTube has over its competitors is the fact that it’s natively all about video, and so has the ability to cater to all types of creators, from amateurs to celebrities to professional broadcasters. But whether that can overcome the network effect that Facebook and Twitter have in terms of content-sharing remains to be seen. It’s certainly going to be interesting watching it play out

The first YouTube stars to begin using this livestreaming capability include The Young Turks, AIB, Platica Polinesia, SacconeJoyls, and Alex Wassabi. The capability will be available on all mobile platforms where YouTube’s app can be found, including iOS and Android. Previously, YouTube has livestreamed events like the Royal Wedding (2011), Felix Baumgartner’s leap from space (2012), and this year’s Coachella — a broadcast that was watched by more than 21 million people.