Fledgling podcasting platform ZCast has unveiled a notable update this week, as the Israeli startup looks to cement its position in the competitive audio-broadcasting realm.

Founded initially as a mobile collaboration tool called Zula in 2012, ZCast is the result of a pivot back in February this year that effectively gave birth to a whole new company with a fresh team and new founders. The company has also secured around $300,000 in private investment, though the previous incarnation had nabbed around $4 million from the likes of Microsoft Ventures, among others.

By way of context, there is no shortage of mobile podcasting tools out there already, with the likes of SoundCloud and Audioboom serving long-form broadcasters, while younger upstarts such as Anchor FM cater to the short-form market. But ZCast has a few tricks up its proverbial sleeve — for example, it lets users invite cohosts to participate in a podcast remotely, and there are no restrictions in terms of podcast length or size of audience. 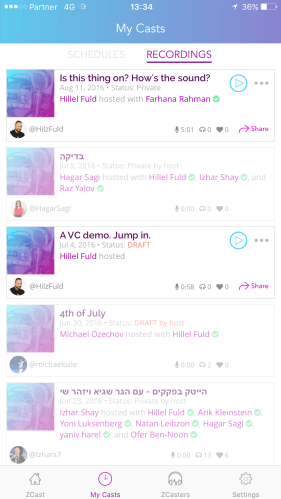 ZCast is available on iOS and the web, but one of the major downsides in its short life so far has been that it has only dealt with live audio — there was no easy way to record audio and make it available later. In an interview with VentureBeat, cofounder and CMO Hillel Fuld explained why — basically, it came down to the company having a small team with limited resources.

Given that recordings are an integral part of any self-respecting podcasting app, ZCast has actually allowed some of its bigger-named users to access their podcasts after the broadcast — but it wasn’t an elegant process. “We saved the recording on our server, and for the huge names that have used ZCast since launch, we sent them the recording manually,” said Fuld.

But with the latest update, it’s now possible to record broadcasts and make them available for posterity. Other new features include giving podcasters personal landing pages and letting them edit podcast meta-data, including title, description, and tags.

“Since the initial launch of ZCast back in January, the number one request from users was to unleash recording, archives, and landing pages,” added Fuld. “We’re a small team, and it took us some time to get all our ducks in a row. But we did it.”

The app’s still not perfect though. For one, it requires a Twitter log-in to use the service, something that makes sense in some ways but will deter a lot of people. “Twitter log-in lets people discover casts via social, similar to the way Meerkat did it and Periscope does it,” explained Fuld. “[But] we will absolutely be adding other log-ins in the near future.”

Then there’s the elephant in the room — ZCast is only available on iOS and the web for now. But Fuld tells VentureBeat that an Android incarnation is “the next thing” on the company’s roadmap.

With the mighty Facebook seemingly going all-in on video broadcasting, it’s interesting to see younger startups invest time and resources on audio, and it also helps to illustrate the different use-cases each medium can cater to.

“Most [people] are not comfortable going live on video, but anyone would be comfortable on a conference call,” said Fuld. Then there’s the issue of internet speeds and quality — you can get by with much less data and bandwidth with audio broadcasting. “Audio removes the psychological and technological barriers that are associated with video,” Fuld continued.

It’s still early days for ZCast, and it’s perhaps a better tool for podcasters right now than it is for consumers on the hunt for cool stuff to listen to. Indeed, ZCast doesn’t offer a full-blown archive in the same way something like Pocket Casts does, but this is something Fuld says the company’s looking to add in the future. If it does this, then ZCast could well become a major podcasting brand — a one-stop shop for all things podcast.

“I envision ZCast becoming the de-facto platform for creating, sharing, and consuming the next generation of podcasts,” added ZCast cofounder and CEO Raz Yalov. “We are setting new standards for what we come to expect from audio content.”