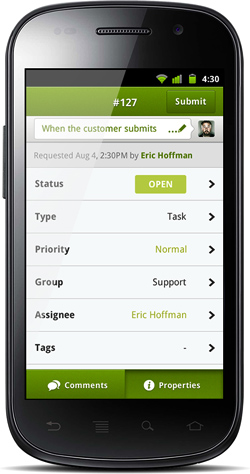 Zendesk made our recent list of “Top 10 disruptive cloud companies we’re excited about” because it is enabling small and medium-size companies to create on-demand help desks and cloud-based call centers. The company’s smart and simple web apps and its mobile apps for iPhone, iPad, Android and BlackBerry are helping businesses compete with much bigger players in the area of communications.

The new Android application from Zendesk mimics its already good iPhone and iPad applications and works for most Android phones and tablets. Using design philosophies similar to social media outlets like Facebook and Twitter, the company has simplified the interface and wants to make it almost fun to use. The company emphasizes the following Android updates:

• Real-time updates give customer support agents the power to take up-to-the-minute action on support requests.
• Improved access to the support activity that matters most. Now up to three views of the must urgent support requests can be pinned to the Zendesk dashboard, allowing immediate visibility into priority support issues, such as requests that have been deemed urgent or unanswered.
• New attachment capabilities mean customer service representatives working out in the field can take pictures of hardware, etc., and attach to the support activity thread, greatly increasing the speed in which a customer support issue can be resolved.

“As adoption rates for Android continue to explode, we want to continue to elevate the usability and effectiveness of this popular mobile application,” said Adrian McDermott, Zendesk’s vice president of product and engineering, in a statement.

The company took a big step in mid-September by partnering with Twilio to create Zendesk Voice, which lets companies set up cloud-based call centers for much less money than regular call centers. Zendesk Voice is available in the U.S. and Canada, with calls billed at 5 cents per minute. Representatives from Zendesk and Twilio also appeared on stage together at VentureBeat’s CloudBeat conference last week to explain why the two companies are “best buds in cloud.”

San Francisco-based Zendesk has raised $25.5 million in three rounds of funding, with a $19 million round in December 2010. The company’s venture backing comes from the likes of Matrix Partners, Benchmark Capital and Charles River Ventures.