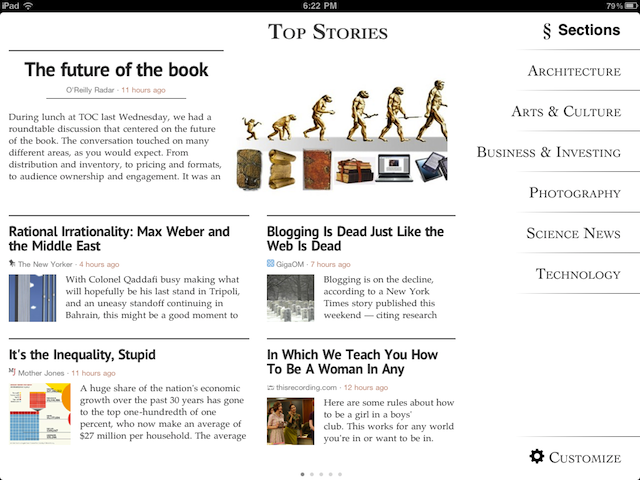 There are many, many newsreaders available for the iPad, but entrepreneur Ali Davar said his startup Zite is launching an iPad magazine with the content that’s most personalized to a reader’s needs an interests.

The obvious reference point here is Flipboard, the popular “social magazine” for the iPad that allows users to browse their social networking content and news in beautiful, magazine-style layout. Zite seems to combine a Flipboard-style reading experience with content personalization technology that has a similar aim to companies like Gravity and My6sense.

Users can automatically create their personalized magazines by connecting either their Twitter or Google Reader accounts to the app. When Davar, who is the company’s founder and chief executive, demonstrated the app for me yesterday, we used my Twitter account, and the app succeeded in examining my tweets and pulling in stories relevant to my interests — although I thought technology was a bit overrepresented in the contents of “my” magazine. I suspect that Zite would have done even better if we had used my Google Reader account (for example, I spend a lot of time reading about politics, but I try to keep political tweets to a minimum). More importantly, the application gets better the more you use it, learning from whether or not you give an article a thumbs up or a thumbs down, as well as more subtle signals like how much time you spend reading each article.

There are other startups looking at user behavior to deliver personalized news, but the ones I mentioned above aren’t delivering that content in the form of a slick iPad magazine. Davar also argued that Zite’s personalization technology compares favorably to the competition’s — he was clearly a little exasperated that I didn’t own an iPad on which to test out Zite in more depth. (Hey, I’m exasperated by my iPad-less state too.) For example, he said that the app isn’t just looking at the topics that readers are interested in, but also the types of content — so it knows whether you prefer long, in-depth features or short news articles.

Zite is based in Vancouver, British Columbia, and it’s based on technology developed at the University of British Columbia’s Laboratory for Computational Intelligence. The company is funded, in part, by grants from the Canadian government.